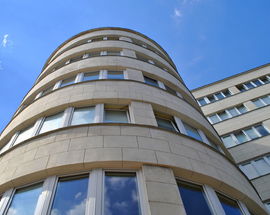 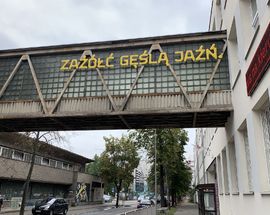 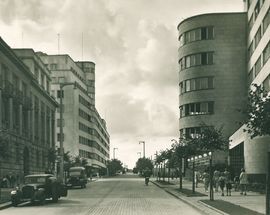 The three cities of Trójmiasto (ENG: Tri-city) each have their own distinct architectural styles. In Gdańsk, one of the country's oldest settlements, the old centre is mish mash of influences from all over 15th-century Hanseatic Europe, that has been leveled and restored since WWII. Heading north, the spa resort of Sopot is defined by its late-19th and early 20th-century Secessionist or Art Nouveau influenced villas, with the exception of the Communist-era Alga Pavilion on the main square. But it's Gdynia, the youngest of the three, and its 20th-century Modernist Architecture that really catches the eye, and not always for the reasons you might think.
Favouring concrete, glass and steel-reinforcement over 'traditional' building materials and rejecting ornamentation and complexity in favour of a minimalist approach, the stark and comparatively-no frills approach to Modernist Architecture is a thing of beauty to some and an eyesore to others. Amongst the architecturally-savvy, the modernist approach is known for it's philosophy that form should follow function. So no fancy red-brick houses with cyllindrical-towers and cast-iron spires...because it will get too hot and your new desk is not going to fit nicely against the wall! Internationally, there are significantly-less buildings of this style designated by UNESCO as World Heritage Sites compared to others, though one notable Polish inclusion is Wrocław's Centennial Hall! Then again, it's only been about a hundred years, so maybe we need a few more centuries for the ambitious and innovative likes of buildings we see in Gdynia to reach Taj Mahal status.

Gdynia is one of the country's youngest cities. Its relatively-new existence is a result of Polish independence in 1918, when Germany and Austria's defeat in WWI allowed for partitioned-Poland to reclaim its territories. The coastal region of Pomerania, however, remained a part of Germany and the League of Nations' decided to make Gdańsk (then Danzig) an independent city-state, which left Poland without any access to the sea. After successful lobbying at the Paris Peace Conference in 1919, a narrow strip of land joining the main Polish territory to the Baltic was created in 1920 (Read our Article - What was the Polish Corridor?) In order to create a port and rival the sea trade of Danzig, the little fishing village of Gdynia was granted city rights in 1926 and quickly developed into a major centre (Read our Article - Gdynia - Poland's gateway to the world). Not content living in the shadow of its well-established neighbour, Gdynia was eagre to set itself apart from rest of the Baltic neighbourhood and embraced a modernist approach in development. Many of the buildings you see in Gdynia reflect the city’s maritime role, with features like portholes, quarterdecks and curved façades to resemble ships. The development of these structures are intrinsically-linked to the city's birth and interwar development. In the article below, we refer to each paragraph by the street or area which afore-mentioned modernist gems can be found!

Hopping off the train at Gdynia Głowna Station (itself a mix of Social Realist and pre-war Modernist styles) and heading down the nearest major road heading east, you will cast your eyes on a number of high-rolling modernist buildings. The two main examples here are the Tourist Information office, formerly the Polish Ocean Lines building and at one stage Café Bałtyk, on the corner of 10 Lutego and 3 Maja and the Bank Gospodarstwa Krajowego building diagonally across!

Further down 10 Lutego you'll hit Skwer Kościuszki, where a number of tenement houses from the city's early days continue to draw upon the esoterics of being maritime. Pręczkowski's tenement house on the corner of Skwer Kościuszki and Żeromskiego is supposed to resemble the process of shipbuilding! The tenement House of Zygmunt Peszkowski, a former shipyard director, at number 14 also has a nice quarterdeck design, which allows residents to get a nice panoramic view of the square.

Down ul. Żeromskiego is where things are less-pretty but...goddammit they're interesting. Check out the YMCA building on one side and some sort of Technical College on the other, connected overhead by a pedestrian tunnel that is walled with glass bricks and steel framing. Modernist narks will enjoy a closer look at the YMCA building with its uncharacteristically brick façade. You will see more glass-bricking too here and there, but the most bizarre addition to the building are the portholes on the doors.

While you're down on the leisure pier checking out some kitsch souvenirs or visiting the Błyskawica or Dar Pomorze ship museums, take note of the Dom Żeglarza (ENG: Sailor's House) built in 1937 as a hotel, which is now the Faculty of Navigation building of the Gdynia Maritime University. The Gdynia Aquarium building, which looks particularly run down, is next door!

Cruising south and steadily uphill on Gdynia's main street, you will find yet more tenement houses satisfying your modernist appetite. At the intersection of Świętojańska and Żwirki Wigury is the Orłowski Tenement building, built in 1936. The Orłowskis had returned from life in USA and used their wealth to develop this building, which, at 7-storeys tall, exceeded the height limits that existed in the area at the time. The bright, tiled effect of the upper 6 storeys is supposed to contrast with a darker bottom to give it the effect that it's floating! Across the road is the (in our opinion) less-impressive Krenski Tenement House on Świętojańska 55, which functioned as a saw-mill and later as 'a very well represented delicatessen'. All the way down the end of the street at no.122 you will find the Antoni Ogończyk-Bloch Tenement building, featuring a rounded and glazed corner designed for 'winter gardens' or greenhouse compartments for residents to sit in the sun during the colder months.

Piłsudskiego is another cluster of modernist buildings, most notably the Urzad Miasta (ENG: Town Hall) and the Faculty of Marine Biology building of Gdynia Maritime University. If you need a break from architectural tourism, consider taking a break in the new park across the road.

While there's a number of examples around the port area, the biggest draw is the Emigration Museum. It lives in the old passenger terminal, built in 1933 and has a wonderful modernist façade as well as a louvre-esque pyramid skylight. The preserved foyeur is a little more preoccupied with marble and other bas-reliefs, and the building's function and form has been expanded upon over the years!

ul. Polska 1, Gdynia (Dworzec Morski)
EDITOR'S PICK
/gdynia/emigration-museum_98969v
Opened in May, 2015, this a fascinating look at how, why and to where millions of Poles have emigrated over the centuries. With Poland thought to have the …
see more
Editor's pick
Indoor Attractions

Al. Jana Pawła II 1, Gdynia
/gdynia/gdynia-aquarium_20158v
A perfect place to visit on days when the weather forces you inside, the Gdynia Aquarium is stuffed with over 2,000 creatures and pint-sized guests will …
see more