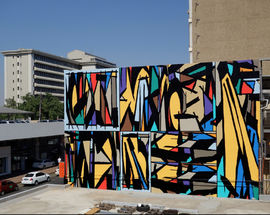 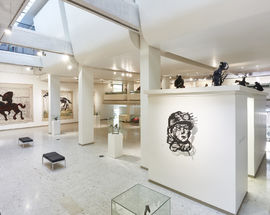 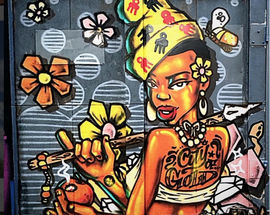 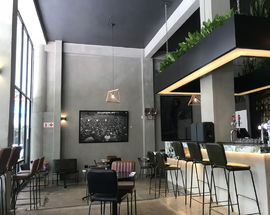 Braamfontein, Joburg’s student heartland and unofficial capital of cool, is one of the city's brightest examples of inner city regeneration. Alongside the neighbourhood’s hipsters, students and street fashion rebels, a burgeoning art scene characterised by edgy, contemporary art galleries and vibrant public art and graffiti has emerged, helping propel the neighbourhood forward in its journey to becoming one of South Africa's most happening downtown districts. For anybody with even a passing interest in South African contemporary art, a stroll around Braamfontein is a great way to get a feel for the youthful creative spirit that has helped place this city at the centre of the country's arts scene.

Start your art exploration at the Wits Art Museum, part of the University of the Witwatersrand. Home to an extraordinary collection of contemporary and historical African art, only a small portion of the Wits collection is ever on show at any one time and there is no permanent exhibition. New temporary exhibitions open every few months showcasing both new works and historic collections and are complemented by a free programme of events that include walkabouts, family workshops and drop-in drawing classes on Saturdays.

From Wits Art Museum walk down Jan Smuts Avenue to Juta Street to visit the Stevenson gallery. Known for its provocative and thought-provoking contemporary exhibitions and installations by leading South African artists, Stevenson also represents artists from the wider African continent and the diaspora. Among the most famous artists represented by the gallery are names like Robin Rhode (recent winner of the Zurich Art Prize), LGBTI activist and photographer Zanele Muholi (recipient of the 2017 Chevalier de l'Ordre des Arts et des Lettres), performance artist Steven Cohen and Deutsche Bank's 'Artist of the Year 2017' Kemang Wa Lehulere.

Three doors down, also on Juta Street, is Kalashnikovv Gallery. Established in 2013 by artists and long term collaborators M.J Turpin and Matthew Dean Dowdle, the gallery was launched as a 'hybrid space' that champions progressive, alternative and 'outsider' artists whose works might not otherwise find an audience in more established and conservative galleries. This is the place to set aside your inhibitions and get to grips with works by some of the city's edgiest (and occasionally the most controversial) artists such as Vusi Beauchamp and Ayanda Mabulu.

On the other side of Braamfontein, the vast national heritage landmark Constitution Hill, houses a series of museums detailing the area's history as a colonial fort and apartheid-era prison as well as the South African Constitutional Court which contains one of the most impressive contemporary South African art collections in the country. The court building is open to the public whenever the court is in session and a guided visit is included in the entrance price of a visit to the Constitution Hill museums.

Home to Grayscale, Joburg’s only gallery dedicated to street art, Braamfontein is a hotspot for South Africa’s graffiti artist community with the annual City of Gold Urban Art Festival attracting international graffiti artists to enliven the neighbourhood’s streets with their spray cans. The 2018 edition of the City of Gold Urban Art Festival added to the area's already abundant graffiti murals and left an easily explorable trail that any street art fan should follow.

Start at the Grayscale gallery (33 De Korte Street), where artworks by Serbian artist Sobekcis and Malik await, then turn right onto Eendracht Street for works by local and international names including British graffiti artist Solo One, South African tattoo and graffiti artist Rekso and Spanish illustrator and street artist Isaac Malakkai. From here head to the corner of Henri and De Korte Streets to see murals by Joburg-based graffiti artists Bias and Kevin Love, then follow the 'graffiti alleyways' for works by South African graffiti veterans like Falko and Mars.

Besides graffiti art, Braamfontein also has a host of other public artworks that are worth keeping your eye out for including Hannelie Coetzee's spectacular 10 storey mural Nzunza (at 28 Melle Street), a portrait of an Ndebele woman made entirely from old ceramic plates, and Clive van den Berg's immense concrete Eland monument that greets visitors to Braamfontein on Jan Smuts Avenue.

The Artivist, a bar, bistro and art gallery on hip Reserve Street, is a welcome alternative to Braamfontein’s mainly student-focused nightlife with a great cocktail menu and sophisticated food offerings that include plenty of vegetarian options. Founded by DJs Kenzhero and Bradley Williams, The Artivist's walls acts as a temporary gallery space with exhibitions changing every month. The pair also host regular concerts and parties at the Untitled Basement, a chic underground pop-up events venue one floor below, that attract a cool, artsy crowd.

At Testament, an artist-run cocktail bar adjoining Kalashnikovv Gallery, avant-garde cool rules. Celebrating “creativity as religion”, the decor is minimalist and based around a series of installations created by the gallery owners that reference catacomb skulls and death clocks and reflect thoughts about religion, life, death and the cult of social media. On the menu expect premium spirits and carefully crafted cocktails and sitting beside you in the pews of this shrine to the worship of creativity you'll usually be joined by the Joburg art scene's who's who.

7 Reserve St, Braamfontein
EDITOR'S PICK
/johannesburg/the-artivist_155741v
Launched by DJs Kenzhero and Bradley Williams in winter 2018, this effortlessly cool bar, eatery and gallery is perfectly placed to fill a gap in the market in …
see more
Editor's pick
Art in Johannesburg

70 Juta St, Braamfontein
/johannesburg/kalashnikovv-gallery_123411v
An exciting gallery space that showcases art from a range of disciplines, with a focus on street art and graffiti as well as on digital art. This is a …
see more
Art in Johannesburg

Cnr Bertha and Jorissen Sts, Braamfontein
/johannesburg/wits-art-museum-wam_123388v
Home to an extraordinary collection of African art, including contemporary and historical art from across the continent. WAM offers a dynamic programme of …
see more
Mandela's Joburg

Cnr Joubert St and Kotze St, Braamfontein
EDITOR'S PICK
/johannesburg/constitution-hill_122823v
The buildings of Constitution Hill in Braamfontein reveal the horrors of some of the darkest hours of 20th Century South Africa, while also showcasing the …
see more
Editor's pick