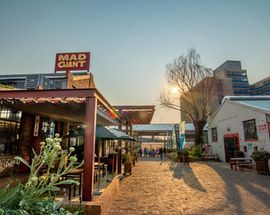 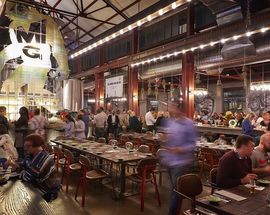 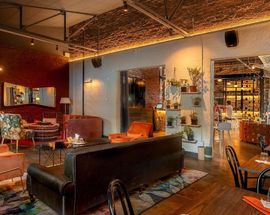 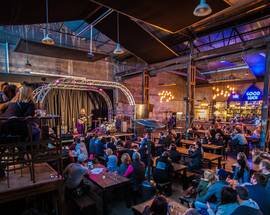 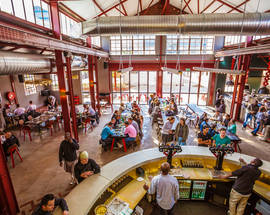 The newly named 1 Fox Precinct’s warehouses are thought to have been constructed in the early 1890s, when they were used for manufacturing mining equipment for the nearby gold reef, which then stretched along the southern edge of the city centre. You can still glimpse this industrial heritage in fading signs, wonderfully old-fashioned copper-coloured lamps, immense timber frames and corrugated-iron cladding. Inside this cleverly reconfigured industrial space there's plenty to keep you occupied day or night, especially if you are a fan of fine foods and tasty craft beers.

MAD GIANT AND URBANOLOGI
Undoubtedly the most striking space is the ‘shed’ that houses Mad Giant craft brewery and Urbanologi restaurant. Top designer Haldane Martin used a clever mix of materials to meld a sense of industrial history with colourful playfulness. The light fittings and tables in the beer garden outside resemble oversized Meccano sets, while, at the centre of the brewery, is a sculpted concrete bar resembling a giant bottle-top. Behind it, an immense metal cutout of a yeti-like Mad Giant lopes in front of the shiny metal tanks where the craft beer is brewed. It’s a fun design statement, but one that also speaks to the city of gold’s enduring power to make its arrivants dream big.

The menu at Urbanologi restaurant focuses on small plates, rich in flavour and ideal for sharing, with a unique eco-conscious philosophy, titled #project150 which guarantees that all ingredients used in the restaurant are sourced from within a 150km radius. Mad Giant craft brewery brings together science and an immense love of beer into the space – the brand’s co-founder, Eben Uys, is a 30-something chemical engineer whose thorough understanding of froth has made its way into scientific journals.

Beer is at the heart of this high-concept yet unpretentious space, and you’ll be surrounded by a mixed crowd attracted by the opportunity to socialise in the city, with great-tasting beers and an exciting selection of regularly changing seasonal brews. There's also a bottle shop where you can pick up Mad Giant brews, fun T-shirts, caps and a range of super custom-made glassware that makes for great souvenirs, as well as a specially dedicated beer tasting bar area and a sunny beer garden that is the perfect place to spend the afternoon.

THE LITTLE FOX
If gin is your thing then what better place to enjoy it than at a cocktail bar located inside a gin distillery? Headed by star mixologist Gareth Wainwright, in partnership with the Ginologist craft distillery, the bar is located inside one of the older 1 Fox Precinct warehouse and neighbours the Mad Giant craft brewery.

The innovative and creative menu also showcases other craft spirits such as rum and mezcal and the witty bartenders, who are both extremely knowledgable and downright fun, are usually up for conjuring new creations on demand. Where the Mad Giant brewery space has an industrial-chic feeling, here the decor is much cosier with plus vintage furniture, lots of indoor plants and an ever-growing collection of quirky artworks by local artists.

THE GOOD LUCK BAR AND FOX JUNCTION
In the neighbouring courtyard is The Good Luck Bar. Behind a pair of hulking triple-volume doors bearing decades-old warnings against the dangers of dynamite awaits this spacious live music venue that is used for major gigs, festivals and occasional club nights. At the very biggest events the adjoining space Fox Junction next door is also opened to supply plenty of overflow for festivalgoers.

GETTING THERE:
There is a car park opposite the entrance on Alexander St. The Main Street Mining District (one of the stops on the open-top City Sightseeing bus route) is a five-minute walk away via Fox St, a route which takes you past the Chancellor House open-air museum (once the location of Mandela & Tambo Attorneys offices in the 1950s) and Marco Cianfanelli's marvellous sculpture of a young Nelson Mandela shadow boxing.
Entrances at 1 Fox St and 1 Main St, Ferreirasdorp, City Centre.
Craft Breweries and Distilleries

1 Fox St, Ferreirasdorp, City Centre
/johannesburg/urbanologi_146257v
This restaurant in the city's first historical neighbourhood of Ferreirasdorp is without doubt one of Joburg's sexiest spaces, located in an old warehouse with …
see more
Live music and jazz clubs

Cnr Fox St and Gerard Sekoto St, Ferreirasdorp, City Centre
/johannesburg/chancellor-house_123498v
This smart little museum with all of its exhibits displayed in the windows to passersby was once the office of the first black law firm in the city - Mandela …
see more