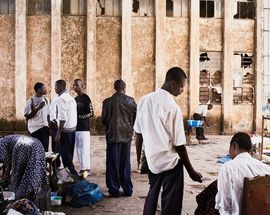 Throughout the past century South African photographers have not only influenced how South Africa sees itself, but also how the world sees South Africa.

From Sam Nzima's unforgettable images of the Soweto Uprising and Bob Gosani's iconic portrait of a young Mandela shadow boxing, to the Drum generation's fashion photography, and the infamous 'Bang Bang Club's documentation of the violent final years of apartheid, in the 20th Century photojournalists revealed to the world the truths about life under apartheid.

In more recent years South African photography has also found its rightful place in the world as an art form. The work of contemporary photographers such as Zanele Muholi (recently celebrated in a retrospective at the Tate Modern Museum in London), Roger Ballen, Mohau Modisakeng and Jodi Bieber can be found in international museum collections and a new generation of artists and photojournalists are using the power of the camera to share a different perspective on our world.

Leading auction house Strauss & Co is putting South African photography in the spotlight for its latest online auction. You can join in the bidding online at straussart.co.za from March 22-29, 2021.

Here's a look at the highlights from some outstanding South African photographers we think you should know.


Truly an icon. The late David Goldblatt has been described as South Africa’s ‘visual conscience’ and is known particularly for his documentation of the cruelties, absurdities and everyday destruction of dignity by the apartheid system. During the Apartheid-era Goldblatt shot primarily in black and white, saying that “during those years colour seemed too sweet a medium to express the anger, disgust and fear that apartheid inspired”. In later years he began to work in colour and throughout his life he continued to use his camera to capture the stories of the contradictions and realities of South African life.


Particularly focused on telling stories from troubled regions of sub-Saharan Africa where people are struggling to overcome conflict and violence, Tillim's work seeks to humanise the often 'forgotten' conflicts of the world, revealing the stories of ordinary people and their hopes and dreams.

One of his most acclaimed series is Avenue Patrice Lumumba from 2007, shot in Mozambique, Democratic Republic of Congo, Madagascar, Angola and Benin. Tillim described the series as "not collapsed histories of post-colonial African states or a meditation on aspects of late-modernist-era colonial structures, but a walk through avenues of dreams ...". A large-scale print of his image of a group of youths at the Athénée Royal High School in Lubumbashi, Democratic Republic of Congo from this series is on sale in the auction.


Primarily a portrait photographer, Pieter Hugo considers the role of photography as lying between documentary and art traditions. His work focuses on peripheral communities, challenging preconceptions around the "representation of groups of people 'other' to the Western European norm".

Hugo is most famous for the series The Hyena & Other Men (2007), works from which are included in the sale. The so-called 'Hyena Men' live around the peripheries of Nigeria's cities, earning a living by performing, and selling traditional medicines. In his series of subversive images, Hugo reveals a stillness and unique co-dependence in the complex relationship between the men and the wild animals they live with. The story of how Hugo captured these extraordinary images of the men is in itself fascinating, as Strauss & Co art specialist Arisha Maharaj explains below.

Mikhael Subotzky’s film, video and photographic works are concerned with the structures of narrative, social storytelling and representation. He strives to tell the stories of both places and the people who bring life to them, such as in his famous Ponte City series which documented life in Joburg's iconic Ponte tower and his Beaufort West study of isolation and incarceration in a small town prison.

Early in his career he worked as a photojournalist and some captivating portraits from this period are on sale in the auction including a portrait of blind fishermen Kwabla and Yaovi Ahotor taken on assignment in Ghana in 2007, and a 2005 portrait of Zambian detective Lindiwe Mutoma.

Cape Town-based artist Athi-Patra Ruga works in a wide range of mediums, from performance, photography and video, to textiles, printmaking and even stained glass, exploring notions of utopia and dystopia, memory, mythology, sexuality, traditional culture and ideology. In 2019 The Knight of the Long Knives I, from his ongoing Future White Women of Azania (FWWOA) series, set the world record for the most expensive South African photograph, selling at a Strauss & Co auction for R1.7million.

Included in the latest Strauss & Co online auction is another image from the FWWOA series. The photo was captured in 2017 in Grahamstown during a famous performance by the artist during which he violently popped balloons filled with colourful liquid against a Boer War statue in the centre of the town.


How to bid in Strauss & Co's Online Auctions

Register online through the "Register to Bid" link and complete the short form. This can be done from the moment the sale opens. You can browse the online auction by lot, department or artist, with a filter option allowing you to also search for items based on price or keyword.

Clicking on "Submit your Bid" brings up the bidding popup window, which features a “submit “button that allows you to accept the next bid value. Up to the last hour of the auction, if you have an active bid you will receive an email and an SMS when you are outbid on a lot. Successful buyers will receive an email after the sale has closed, detailing purchased lots and check out procedures.