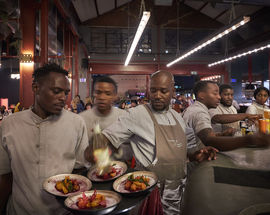 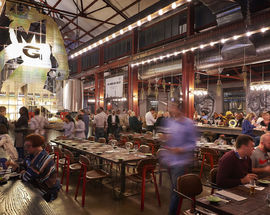 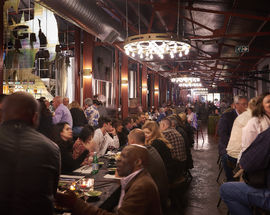 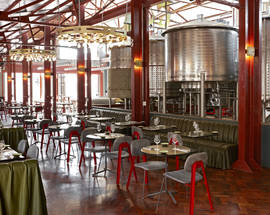 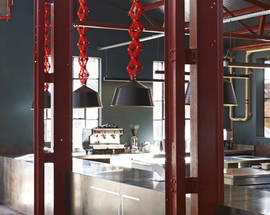 This restaurant in the city's first historical neighbourhood of Ferreirasdorp is without doubt one of Joburg's sexiest spaces, located in an old warehouse with history that stretches back to the heyday of this gold rush town.

Urbanologi is the sister restaurant of the Mad Giant Brewery and is housed in the same impressive space at 1 Fox Precinct. The said Mad Giant looms above the bar space (behind it is the working brewery) as an immense metal cutout, looking over innovative industrial-style, Meccano-inspired décor designed by furniture and interior designer Haldane Martin. Large and moody murals look out across the dark wood tables. The main concrete bar resembles a bottle-top while the parquet flooring breaks up along the floorspace to remind one of the building’s heritage. The result is a show-stopping space, ambitious not only for where it is located in the city, but raising the bar for Johannesburg restaurants generally.

In the kitchen is a team led by young chef (27-year-old – in 2019) Jack Coetzee, who has brought an innovative approach to Urbanologi with the introduction of his 150km farm to plate philosophy.  Coetzee, who was raised on a farm in Zimbabwe, studied in Cape Town where he trained at the famous Silwood School of Cookery, and went on to work in Luke Dale-Roberts' much-awarded and internationally acclaimed Test Kitchen (previously awarded a top spot on the world's best restaurants list).

Coetzee's #Project150 is an exciting addition to Joburg's culinary scene where there has been an increasing trend towards considered food, ethical sourcing and urban farming initiatives. Coetzee talks with excitement about the wide availability of fresh ingredients within 150 kilometres of the city, the first stop being the herb garden located on Mad Giant's doorstep. Part of the enthusiasm about finding new food suppliers is also about the inventiveness they bring to growing, making it easier to source hard to find ingredients that are only grown in small quantities.

Coetzee's says it was his farm upbringing that gave him an appreciation for what most chefs don't see. "I have noticed more and more how disconnected the public are from where their food comes from". His #Project150 was shaped by the challenge of connecting patrons with his food philosophy. Another recent influence has been award-winning US chef Dan Barber's book The Third Plate, which outlines a philosophy for ethical, sustainable and delicious eating, based on a deep consideration for where food comes from.

Our food habits are having a profound impact on the environment and on the world's food supply. For example, experts forecast that by 2030 the global demand for fish protein will outstrip supply in many countries unless there is a radical change in our approach.

Since February 1 Coetzee's team have been pursuing the '150 Ingredients – 150 Days 'challenge, posting an ingredient a day on social media to showcase the immense variety that has been sourced from local farmers, makers and breeders. On the menu each dish has a label showing the producer's name, location and distance from Urbanlogi. It's also cleverly divided into categories by supplier – butcher, baker, greengrocer etc. From the ciabatta made at Just Teddy bakery 0,05km away to baked tilapia sourced from a Hekpoort fish farm 73,9km away you can get to know the surrounding areas and connect with your food  before it reaches your plate.

Coetzee admits that it takes time as a chef to find your own style. His approach is to move from the fussiness of fine dining to a more minimal plate of three or four components that get a chance to stand out – from tempura shimeji mushrooms to grilled asparagus with matured goat gouda, trout sashimi and lamb loin with braised fennel to pork cheek with kimchi. Urbanologi's menu still has its shared plates, ideal seeing as though there are so many enticing flavours on offer. There is a dinner and lunch (smaller) menu. And of course, perfectly complementing the menu, are Mad Giant's craft beers.

1Fox Precinct, 1 Fox St, Ferreirasdorp, City Centre
/johannesburg/mad-giant_145881v
Mad Giant brings together science and an immense love of beer – the brand’s co-founder, Eben Uys, is a thirtysomething chemical engineer whose thorough understanding of froth has made its way into scientific journals. The craft brewery is located in the
see more

1 Fox Precinct, 14 Alexander St, Ferreirasdorp, City Centre
/johannesburg/the-good-luck-bar_144040v
In the city centre's historic Ferreirasdorp district (the location of the first tented camps of early gold rush Joburg) you’ll find the Good Luck Bar, named in honour of the early 1890s drinking establishments that were said to have operated from this lo
see more