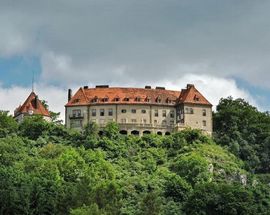 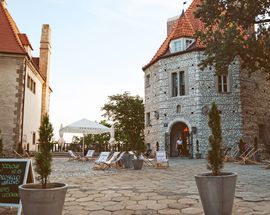 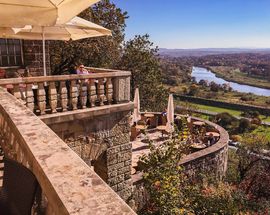 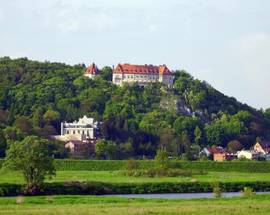 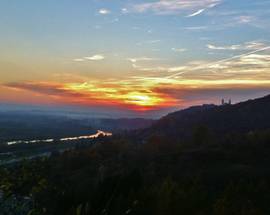 About 6.5km west of the Old Town, on a rocky outcropping at the edge of the forest overlooking the Wisła River, lies Przegorzały Castle - one of Las Wolski's highlights, and an easy short hiking destination with big rewards. While today the sunset views from the amazing terraces represent a motion-picture-perfect romantic retreat, this site has a sinister back story. Despite resembling an ancient royal residence, this picturesque estate actually only dates back to the late-1920s when local architect and conservator Adolf Szyszko-Bohusz built the building today known as the 'Bastion' as his family residence. Seized by the Nazis at the start of the war, the estate was soon transformed into a grand residential castle for Otto Wachter - the Nazi 'Governor of the Cracow district.' [It was Wachter who established the Kraków Ghetto and organised the mass murder of Polish Jews across Galicia; he also oversaw the execution of over 1000 ethnic Poles (mostly thought to be resistance fighters) in a mass grave nearby the castle known as 'Glinik.'] The estate's imposing main mountaintop villa - then called Schloss Wartenberg ('Castle Observatory'), and today known as Przegorzały Castle - was built in 1942-43 before work was stopped upon Wachter's reassignment to Lviv; original plans for a funicular railway from the base of the mountain to the castle were never completed.

After the liberation of Krakow in 1945, the Bohusz family tried unsuccessfully to reclaim the property and it became the seat of the Department of Forestry. Until 2018 Przegorzały Castle then housed Jagiellonian University's Institute of European Studies, and the Centre for Holocaust Studies. Today it is home to the U Ziyada/Zamek w Przegozałach hospitality complex, which features a 5-star hotel (opening spring of 2022), 2-level restaurant/cafe/bar (the terraces of which are currently open!) and the separate Baszta restaurant/cafe (currently open) with its own terraces. The terraces here, of which there are several, offer jaw-dropping views of the Wisła River and the valleys below; on clear days, the peaks of the Tatras can even be seen in the distance. Undoubtedly one of the most romantic, picturesque, and intimate locations in Kraków, dinner or even just a coffee at Przegorzały is the perfect end to a trip to Las Wolski; heck, the views easily justify taking a cab straight there from your hotel (20-35zł for the about 20min ride). Bus 109 delivers you directly there from the 'Cracovia Stadion' stop on weekdays, or take bus 134 from 'Cracovia Stadion' to the Zoo and enjoy a scenic 15min stroll down the yellow trail to the castle.

ul. Jodłowa 13 (Przegorzały Castle)
/krakow/restauracja-zamek-u-ziyada_16757v
One of the most romantic destinations in Kraków, if you've got a date, blindfold them, put them in a cab and bring them here. Extending out of a
see more