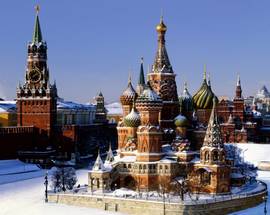 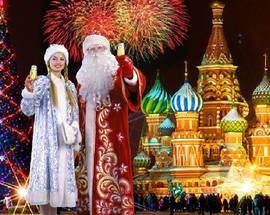 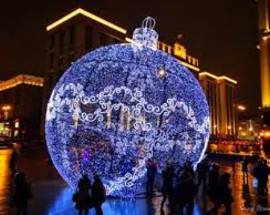 Russians love a good party and New Year is the biggest party of the year. Every man, woman and child across the country will be celebrating in some way or another and with Moscow being the capital you are spoilt for choice with ways to enjoy the holiday season. And New Year’s night is just the start of it. In Russia the holidays go on for days and even weeks, so get ready for some partying, drinking and a whole lot of S Novim Godom! (Happy New Year!)

The celebrations on Moscow’s Red Square are the centre point of New Year celebrations across the country - when the Kremlin bells ring out, the New Year has really gotten started. Getting on to Red Square for New Year to see the fireworks, listen to the bells and hug random members of the public can be more difficult that breaking into fort Knox though. Security checks surround the whole area for blocks and blocks and if you don’t arrive there at at least 21:00 you stand very little chance of getting near the square. If you do get in, watch out for flying fireworks, corks, pick-pockets, ice and of course the possibility that you might get very, very drunk.

Most Russian families like to celebrate New Year at home. The New Year dinner traditionally consists of numerous salads (including the famous mayonnaise loaded oliviye salad), cold meats, pickles and tangerines (that last one is a kick back to Soviet times when getting fresh fruits in the winter was a real luxury). Drinks on the table will typically include Sovietskoye Shampanskoye the super sweet, mass produced sparkling wine that Russians love, a couple of bottles of vodka or cognac and juices for the kids. The meal starts quite late and leads up to the moment when the Kremlin clocks strike midnight and the Russian president addresses the nation on TV. After that the real party starts and can keep going until the wee hours.

Everyone knows that Kids love Christmas but in Russia it’s all about New Year. On the night of the 31st of December the children gather around their yolka or Christmas tree and start shouting for Grandfather Frost or Ded Moroz (the Russian Santa Claus) to come. After the children have screamed and sang loud and nice enough Ded Moroz arrives with his beautiful helper Snegurochka the snow maiden, lights up the Christmas tree and starts doling out the presents. The yolka celebration is a popular show for kids and many theatres around town do their own version of the tall frosty man’s magical visit. According to Russian legend Ded Moroz and Snegurochka live in Veliky Ustiug in northern Russia. Ded Moroz has the power to freeze things with his big magical stick that he travels with while his granddaughter Snegurochka is said to actually have been created from snow.

They think it's all over! Think again...

No sooner have the New Year parties died down than, the Russians start getting into celebratory mode all over again with the arrival of Russian Christmas, ‘Old New Year’ and err, going back to the office on the January 10. Here are some things you can expect to see during the rest of the holidays.

According to the Russian Orthodox calendar, Christmas lands on January 07 and is a much more solemn and religious affair than in the west. On Christmas eve religious families usually attend a midnight mass at church starting around 22:00 during which there is a special Christmas service including a procession with candles around the church known as the ‘krestny khod’. After the Christmas mass they return home to start the feasting with a huge supper that traditionally consists of 12 courses symbolic of the 12 apostles. The most important part of the Christmas meal is a porridge called kutya, which is made of wheat berries, honey and poppy seeds symbolic of happiness, success and untroubled rest. According to tradition some families used to throw a spoon of the kutya up to the ceiling and if the porridge stuck (hopefully without leaving a stain), there would be a plentiful harvest in the coming year.

With Orthodox Christmas falling on a different date to the west, it’s only logical that in Russia there is a second new year too. January 13 marks the old date when New Year was celebrated (still with us?) and is yet another excuse to start popping open those champagne bottles and start partying all over again! The period between Russian Christmas and old new year is said to be a very auspicious time for making predictions about the future and getting your fortune told. One of the favourite ways to gadat (tell ones fortune) is to melt wax and drop it into water. The shape that it solidifies into should tell you something about your future. Other methods include burning wishes written on paper and then sprinkling them into your champagne or the extreme practice of sitting alone in a Russian bathhouse with only a candle and mirror for company. They say if you stare into the mirror long enough you’ll see your future….