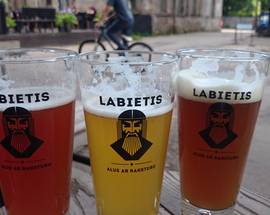 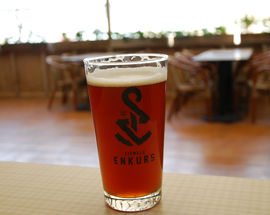 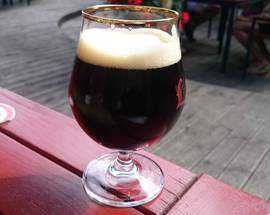 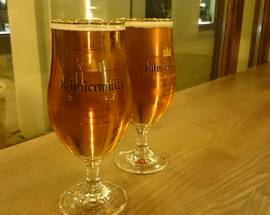 When in a foreign land we always try to wet our whistle with a local brew, but since we’re card carrying beer snobs this isn’t always an easy task. After all, we don’t want to waste our time on mass-produced pilsners and loutish lagers. If you’re of a similar mind then here are a few tips on where to get a good Latvian brew that won’t make you hurl.

Old Riga
If you’re in the old town then head over to Folkklubs Ala Pagrabs, which may be hard to pronounce, but serves roughly 20 Latvian draught beers including delicious offerings by the Viedi brewery like Sazobe – a hoppy IPA. Just around the corner, Paddy Whelan’s has a staggering number of beers from around the globe as well as quite a few Latvian brews on draught. A few blocks away in Old Riga is Miezis un kompānija. Vecrīga, where you’ll find 20 Baltic brews on draught as well as dozens of others in bottles. Not far, down a hard-to-find street in a medieval warehouse you'll find the Armoury Bar that specialises in craft brews from around the globe. Try the Latvian Cilpa pale ale by Malduguns on draught. The Aussie Pub, which has a special 14-beer sampler that will give you a crash course in Latvian beer, is only a couple of blocks away. It also has great brews from Down Under like Coopers. You can also try Easy Beer where you can pour your own beers including the delicious local brews.
Riga city centre
Outside of the old town, the hipster favourite Čē offers a great variety of Latvian craft beers in bottles as well as an eclectic selection of German brews including wheat beers and pilsners. Only a few blocks away at the cosy neighbourhood pub Alus Muiža you’ll find one of the biggest selections of Latvian craft beers in the city on draught and in bottles. Local brewer Nurme has its own little tasting room a few blocks away where you can try their latest offerings. For pale ales, IPAs, saisons, pilsners and seasonal offerings made on the premises try Alķīmiķis (The Alchemist). A few blocks farther is Ziemeļu Enkurs, which offers a clandestine location in a disused industrial building and a variety of tasty beers made on the premises with names like Mermaid, Icebreaker and Propeller. You can also order four small tasters for only €3.
Briāna iela nightlife district
However, the main destination for all beer snobs in Riga has to be the Valdemāra Pasāža, which is home to both the Labietis craft brewery and the Valmiermuiža Beer Embassy (closed in January). Labietis is constantly experimenting with new recipes that use unusual ingredients such as local herbs and spices. Although we usually order the Three Indians IPA or the stronger Virsaitis IPA, other brews like the Cherry Witch, the Tapeworm Killer and the Beekeeper’s Widow have also piqued our curiosity. The Valmiermuiža brewery in northern Latvia has been producing quality beer for years now and can hardly be called a craft brewer these days, but they do pour their latest creations at this ‘embassy’ (closed in January). Try a hearty porter on a cold winter day or a refreshing wheat beer in the summer. It also magnanimously sells beer by smaller boutique brewers like Malduguns here. Try whatevever’s on draught or the Zaļā bise (Green Shotgun) made with American Cascade hops.
Beer shops
If you’d like to buy some interesting brews for the road then we recommend Alus Celle on Baznīcas, where you can also enjoy a brew on the premises, or Beerfox/Callous Alus on Stabu that also specialises in an eclectic selection of quality craft brews from around the globe. It also offers a bar next door. Further still is Lauvas alus, which offers over 200 different beers by 30 Latvian craft brewers as well as local beer souvenirs. In the art nouveau district try Būņas which stocks Malduguns, Labietis and other local craft beers. If you're at the Riga Central Market you can taste beers at the Labietis or Iļģuciems stands in the vegetable pavilion.
Live music

Peldu 19
EDITOR'S PICK
/riga/folkklubs-ala-pagrabs_86872v
One of Riga’s largest Latvian beer bars and restaurants, Folk Club Ala is more of a cavern than a cellar. Descend into the depths of this huge space to find a …
see more
Editor's pick
Beer bars

Grēcinieku 4
/riga/paddy-whelans-irish-pub-sports-bar_141493v
Opened back in 1994, Riga's first Irish pub is also a popular sports bar as well as a place where beer aficionados meet. With dozens of local and international …
see more
Beer bars

13. Janvāra 21
/riga/miezis-un-kompanija-vecriga_157264v
One of Riga’s most stylish beer bars has an odd location in a modern building on the edge of the old town, but if a giant scoreboard listing 20 different …
see more
Bars

Vecpilsētas 11
EDITOR'S PICK
/riga/the-armoury-bar_143620v
Many people have a fascination with firearms and given the numerous displays of authentic pistols, machine guns, semi-automatic weapons and even grenades at …
see more
Editor's pick
Pubs

Vaļņu 43
featured
/riga/aussie-pub_116442v
Riga’s first Aussie pub provides plenty of authentic Down Under atmosphere but thankfully without any of the usual trappings of stuffed koalas or, God forbid, …
see more
Featured
Hipster bars

Dzirnavu 82
/riga/ce_112327v
Were it not for the legions of hipsters smoking and drinking on the unkempt lawn of this neglected building, you’d never know that one of Riga’s best …
see more
Beer bars

Ģertrūdes 45
/riga/alus-muiza_86867v
The Beer Manor is perhaps the city centre’s cosiest watering hole even though it more than doubled its size in the summer of 2017. Raised wooden tables, …
see more
Beer bars

Avotu 53-4
/riga/nurme_159379v
This is another beer bar that has shunned the high rents of the old town in favour of a cheaper neighbourhood with much more character. It is, however, …
see more
Brew pubs

Lāčplēša 12
/riga/alkimikis_135884v
The Alchemist craft brewery is housed in a lovingly restored 19th-century wooden building, yet its interior has been given a much more modern twist. Much of …
see more
Brew pubs

Aristīda Briāna 9A-2
/riga/labietis_119845v
Although difficult to find as it's hidden in a small courtyard behind the popular club Piens, once you reach Labietis you're faced with the difficult task of …
see more
Beer bars

Baznīcas 35
/riga/alus-celle_134143v
This underground beer bar is located in a small cellar with hardwood floors, brick walls and an unusual central pouring station that looks more like a church …
see more
Alcohol & Beer

Stabu 59
/riga/beerfoxcallous-alus_136729v
Run by an American beer enthusiast, this shop specialises in craft brews from around the globe. Takeaway brews are sold until 22:00 and it also offers a bar …
see more
Alcohol & Beer

Tallinas 30
/riga/lauvas-alus_161399v
This shops sells over 200 different brews by 30 Latvian craft breweries as well as glasses and local beer souvenirs. You can also enjoy a draught beer on the …
see more
Organic & Eco-friendly

Dzirnavu 34a
/riga/bunas_148452v
Although not everything sold here is organic, it does specialise in eco-friendly food from Latvian farms and also sells beer and wine from local microbreweries …
see more
Places of interest

Centrāltirgus iela
EDITOR'S PICK
/riga/central-market_11214v
When construction was completed in 1930, Riga’s Central Market was one of the largest and most modern marketplaces on the European continent. Nearly 90 years …
see more
Editor's pick