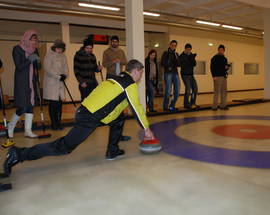 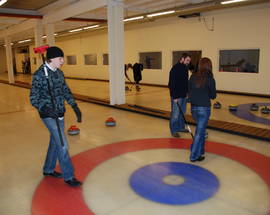 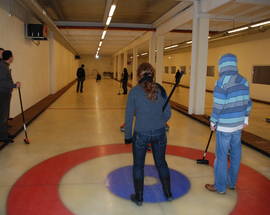 One cold evening Riga In Your Pocket decided that we would pick a winter sport to write a feature about. Given Latvia’s obsession with its hip-checking heroes, hockey would seem a logical choice or perhaps even bobsleighing when one takes into consideration the legendary run at Sigulda, but over the past decade or so we’ve been there and done that several times and we were thirsting for something new.
As luck would have it, our prayers were answered at a chance meeting at a bar on Lāčplēša iela when the guys and gals at Travel Out There challenged us to a game of, wait for it, curling. Yes, curling, that bizarre sport associated with crazy Scotsmen and Canadian janitors frantically sweeping ice to make room for a giant polished rock. To answer your question, yes, the Canadians and Scots are an odd lot, but there has to be something to this bowling on ice or it wouldn’t be an Olympic sport, right?
We, of course, accepted the challenge figuring that it couldn't be that hard throwing a bunch of big rocks.
Unfortunately, it only occurred to us the next day that we needed four people to field a team. It may sound strange, but we’ll let you in on a little-known secret. Riga In Your Pocket is not a well-oiled Borg collective with worker drones in their thousands taking care of countless mundane tasks – calling restaurants, entering data and assimilating alien races. So far, the team consisted of a bald American travel writer with a bum knee and a Latvian snowboarder with a broken arm. We needed to find a few ringers. We enlisted the help of three friends: Disco Rob (AKA Bobby Fresh, AKA Saul Rosenberg) who’s always up for shenanigans on a workday, Ervīns K. (AKA Special K) who’s experience as the director of an international cleaning service could come in handy with the sweeping and the Professor (AKA Skip) who claimed that his distant cousin, whom he hadn’t seen in a couple of decades, had married an Olympic gold medallist in curling.
The team was assembled, but the stakes were high. Naturally, the loser had to pay for the beer afterward so this was definitely a serious affair. After cruising the drab Soviet streets, alleys and courtyards of Mežciems for a while, the group from Travel Out There finally arrived in their yellow van to show us the way to the hidden curling hall that you need five different satellite tracking systems to find. Note to the owners: you need more signs!
Pleasantries were exchanged, clothing was left in the locker room and we were seated in a small conference room where a Latvian curling champion explained the rules to us in English. Next we were ushered out onto the ice, otherwise know as the sheet, where we were handed our brooms and each given one rubber slipper. Our curler extraordinaire showed us the fine points of the sport’s technique and we were all given a few chances to practice our stances, slides, throws (known as deliveries) and, in some cases, falls.
While some picked things up right away, others, including our skip, crashed ingloriously to the ice à la Bambi. As it turns out, the sweeping part wasn’t that much easier. At one point we even struck the stone as it was sliding down the lane causing us to topple over spread-eagle onto the ice. Later we didn’t feel as silly when we discovered that this happens on occasion and it even has its own technical term in international curling circles: a burned stone.
Practice was over and now it was time for the main event. To make a long story short, the curling gods, fate and other cosmic forces beyond our control were not in Riga In Your Pocket’s favour. Beginner’s luck never arrived and after some promising deliveries from our side, the folks at Travel Out There proved too strong, fortunate or, dare we say, experienced and achieved a resounding victory of 4:1. The boys representing RIYP still claim to be the better sweepers though. This was no doubt also picked up by the staff who had to deal with our screams of ‘sweep!’ every minute or so. But in the end, having shed our heavy ski jackets and dripping with sweat, we had no choice but to concede defeat. Yes, the sport that critics have called chess on ice will definitely make you break a sweat!
Our spirits, however, soon began to soar as we discovered that according to curling etiquette, the winner had to pay for beers, so it was off to the pub for some brews and a friendly round of darts. At least we won one of those games!

Curling facts
Each of the eight stones allotted to a team weighs 20kg.
The name curling is derived from the way that the stones are spun giving them a curling arc. The stones are curled because the forces of friction prevent them from travelling in a straight line.
After each team has delivered their eight stones, only the team with the rock closest to the centre is awarded points.
Curling only became an official Olympic sport in 1998.

Biķernieku 121h
/riga/kerlinga-halle_58511v
Riga's only curling hall! You must reserve a lane ahead of time. Take trolleybus N°18 from Čaka to the Eizenšteina iela stop or, better yet, take a cab.
see more