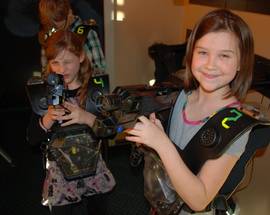 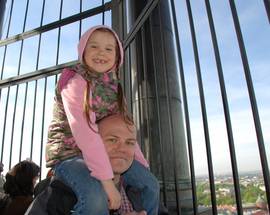 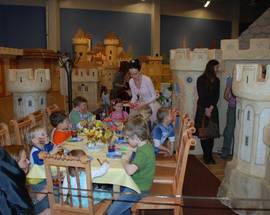 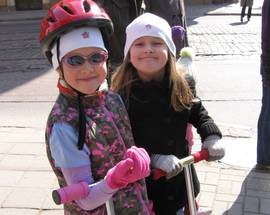 Travelling with children can be challenging under the best circumstances. Medieval churches, dusty museums and uneven cobblestones often have a way of sending the little dears over the edge, usually at the worst possible moment. A full blown tantrum in the middle of a posh art museum can have the most experienced parents ruing the day they became moms and dads (if only for a guilty second). Having been there ourselves, we’ve attempted to lighten your load with some suggestions that will keep your offspring entertained without boring you to tears.

Eating out
Finding child-friendly restaurants and cafés in Riga can sometimes be a bit of a chore, but a few have realised that providing a play area for children can actually add to their bottom line. Vairāk Saules offers a kids’ menu and all the legos a child could ever want and T.G.I.Friday’s offers colouring books, a kids’ menu and sometimes even balloons. Begemots (Dzirnavu 34) offers a separate kids room with a dollhouse, a play kitchen set, drawing table and TV separated from the dining hall by a large glass window. Charlestons has a children’s corner and supervised activities during weekend brunch, while Street Fries Kitchen has a small kids’ area as well as plenty of pancakes and fries.

Educational trips
The Open-Air Ethnographic Museum is a great place for kids. Not only can children learn about Latvian customs and rural living, but they can also see people in period costume performing various tasks like shaping iron at the blacksmith’s.

The Riga National Zoo is always a good option and kids can see everything here from bears to crocodiles. If the word 'museum' already has the kids rolling their eyes, then the Laima Chocolate Museum might just change their minds.

You can also combine a shopping outing with some kids' fun at Zinoo Rīga. This fascinating children’s science centre in the Galleria Riga shopping centre offers a number of interactive exhibits that teach kids about the natural world in interesting ways. The little ones can also take a look at St. Peter’s golden rooster through a telescope or take advantage of the play room that’s filled with development toys. Open 12:00 - 20:00.

Just for fun
The little ones might appreciate a show at the Latvian Puppet Theatre, but all kids love Līvu Akvaparks, which offers a wave pool, a children’s pool, six water slides and a tubing river guaranteed to keep your offspring happy all day long. The giant LIDO Leisure Centre also has plenty to offer including a huge skating rink and lots of children’s attractions, but if you’re child loves bouncy houses, slides, ball rooms, labyrinths and climbing obstacles then head over to City Kids. However, both young and old can enjoy Jump Space Riga, a huge hangar-like building filled with wall-to-wall trampolines. If you’re kids are into skateboarding, inline skating or BMX there’s a big skatepark in the Miera dārzs park (Between Katoļu, Kalupes, Daugavpils and Jēkabpils iela in the Moscow district) that’s open to the public in the spring and summer. Year-round they can hone their shredding skills at The Spot.

Playgrounds
In the city centre you’ll find a good playground at Vērmanes Park (corner of K.Barona and Elizabetes) and at Esplanāde Park behind the Latvian National Museum of Art (F-3, Valdemāra and Elizabetes). Mežaparks offers two huge playgrounds, but you’ll find the biggest playground in Riga on Kr.Barona iela. Take tram No.6 to the Sporta nams Daugava stop. The massive outdoor complex is hard to miss.

Dzirnavu 60
EDITOR'S PICK
/riga/vairak-saules_11313v
The sleek, yet warm and cosy interior of this restaurant chain is cutting edge, the service is genuinely friendly and the food is fantastic. You can choose …
see more
Editor's pick
American

Kaļķu 6
/riga/tgifridays_10922v
Local anti-globalisation fanatics may be upset, but expats and tourists can't get enough of this American chain of bar/restaurants on two floors in Old Riga. …
see more
Barbecue

Blaumaņa 38/40
featured
/riga/charlestons_10984v
We’ve been big fans of this casual, yet elegant restaurant in the city centre for years and if you drop by you'll see why. The main dining hall offers soft, …
see more
Featured
Fast food

Vāgnera 18
/riga/street-fries-kitchen_133357v
What began as a tiny street kiosk has evolved into a small bistro serving a wide variety of pancakes, fried snacks, eggs cooked to order, sandwiches and, of …
see more
Essential Riga

Brīvdabas 21
featured
/riga/latvian-ethnographic-museum_11233v
Take the trip to the north shore of Lake Jugla and you'll be rewarded with nearly 90 hectares of life as it used to be. Farmsteads, windmills, fishing …
see more
Featured
Places of interest

Meža prospekts 1
featured
/riga/riga-national-zoo_11216v
Take a look at a wide variety of animals from around the globe including tortoises from the Galapagos, Japanese macaques, Bactrian camels, African zebras, …
see more
Featured
Museums

Miera 22
/riga/laima-chocolate-museum_124908v
Latvia’s largest chocolate producer has opened up a fun and fascinating interactive museum in its historic premises on Miera Street. After registering and …
see more
Entertainment centres

K.Barona 16/18
/riga/latvian-puppet-theatre_148441v
The Latvian Puppet Theatre offers performances in either Latvian or Russian every day, but shows often sell out, so buy tickets at its box office as soon as …
see more
Swimming

Krasta 76
/riga/lido-leisure-center_10957v
If Paul Bunyon built a log cabin in Latvia it would look like this! Mr. Ķirsons of the LIDO Empire has outdone himself with the biggest buffet of home cookin' …
see more
Entertainment centres

Krasta 52
/riga/jump-space-riga_148430v
This huge space offers wall-to-wall trampolines for both children and adults as well as climbing walls, foam pits, a ‘fighting’ beam and a children’s party …
see more
Skateparks

Ūnijas 12
/riga/the-spot_125898v
This is the biggest indoor skatepark in the Baltics. Some times are reserved only for skaters or BMX riders, but it's usually open to all.
see more