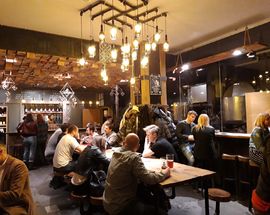 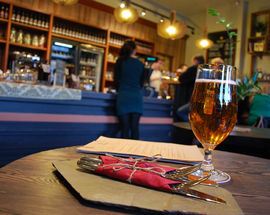 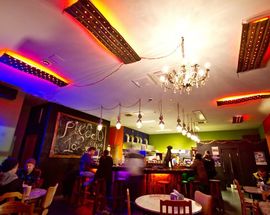 Riga’s had a reputation for nightlife since the 1990s when cocktails meant cheap screwdrivers and nightclubs of all genres didn’t bother closing as long as people were willing to drink and dance. Much has changed since that golden age, especialy at Briāna iela bars. Although prices in Old Riga have risen dramatically in recent years, a pint or a mixed is never far away and is most likely a bargain for citizens of most wealthy nations. Fortunately, the selection of brews and booze has improved beyond recognition, not to mention the diversity of the venues. There are still great places to go in the old town, but if you’d like to see where locals eat, drink and dance then we suggest you take tram No.11 from Kr.Barona iela to the Tallinas iela stop and the Briāna iela nightlife district where a former brick brewery and a forlorn mansion support a wide array of nightlife options for all tastes.
Briāna iela bars
Labietis serves up Latvian craft brews and a unique ambience that’s hard to beat every day of the week. At the weekend its next-door neighbour De Flou specialises in hip hop music, while One One located just opposite hosts late-night parties featuring local and international DJs. On the other side of the building you’ll find Piens, which is a hip sofa bar and club serving food and drinks and Nemiers, a hard rock bar that’s home to local live acts and no-holds-barred drinking sessions. Just around the corner you’ll find Delisnack Riga, which is like an alternative 24-hour diner staffed by tattooed youngsters. Keep going and you’ll run into the Riga embassy of the Valmiermuiža brewery that specialises in great beers from the Vidzeme region as well as refined Latvian food. However, if you need a hit of 21st-century globalisation then try Bento, an Asian-style eatery with sushi, Caesar salads and pop music. Finally, the crumbling Von Stritzky’s Villa hosts parties and special events throughout the year.
Brew pubs

Aristīda Briāna 9A-2
/riga/labietis_119845v
Although difficult to find as it's hidden in a small courtyard behind the popular club Piens, once you reach Labietis you're faced with the difficult task of …
see more
Clubs

Šarlotes 18A
/riga/one-one_136089v
Although difficult to find, this late night club is actually located in a popular creative quarter home to some of the city’s best bars and cafés. Housed in an …
see more
Clubs

Aristida Briāna 9A
/riga/piens_54442v
Located in a renovated 19th-century brewery on the edge of the city centre, this self-proclaimed sofa bar is hard to find and that’s the way the owners like …
see more
Bars

A. Briāna 9a
/riga/nemiers_138327v
We enjoy simple watering holes that don’t put on airs and Nemiers (or Unrest), which refers to itself as a dive bar, certainly fits the bill. This dark …
see more
Midnight munchies

A. Briāna 9
/riga/bento_157015v
It was perhaps only a matter of time before Riga’s best underground nightlife district showed signs of gentrification and this all-purpose Asian restaurant …
see more
Clubs & Other venues