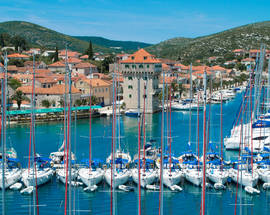 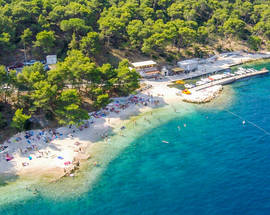 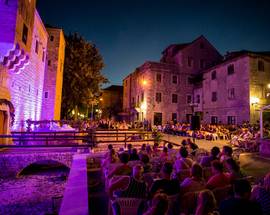 Some might say that Trogir is the ‘mini-me’ of Split, it’s a fine pit stop as it is a UNESCO World Heritage Site with its medieval stone churches, monasteries, palaces and squares. Our tip is the Kamerlengo Fortress which has grand views for taking photos. For another step back in time the town of Solin, which is an ancient Roman settlement and happens to be the birthplace of Emperor Diocletian still has its well preserved amphitheatre, town gate, fortress and other historical buildings.

Marina, a municipality in the Split-Dalmatia County, is located in the center of Dalmatia. It’s situated exactly halfway in between the UNESCO protected cities Split and Šibenik and 12km from Trogir. The settlement is surrounded by picturesque fortifications, such as the quadrangular tower the bishops of Trogir built in the 15th century, Drid hill containing remnants of old stone houses scattered throughout the former Dridske county, as well as the St. Philip and Jacob's Cave, famous for having been visited by Emperor Franz Joseph I in the year 1891. The Marina Riviera consists of three small picturesque Dalmatian towns: Vinišće, Poljica and Sevid, which overlook the crystal clear blue waters and sandy beaches. In the surrounding Zagora region, original Dalmatian traditions and customs, folklore costumes and local gastronomy are still preserved. This area is rich in ancient olive groves and is widely known for producing olive oil. As well, numerous bike paths in this region allow for a great way to explore this time-honoured area.

Similar to Split, its neighbor town just a short distance away, Trogir is yet another Croatian town that possesses incredible historical and architectural traditions, both of which have been built upon by a progression of generations during the past 2,300 years. Walking the streets of Trogir's old town, one encounters Romanesque, Gothic, Baroque and Renaissance architecture and artwork, juxtaposed with modern stores and shop fronts, making Trogir a fascinating amalgamation of architectural styles from different eras.

Founded in the 3rd century BC by Greek settlers from the island of Vis, Trogir was an important port in the region until well into the Roman era, when its importance was diminished by the rise of Salona. Again, like so many other coastal Croatian cities, Trogir underwent a tumultuous series of victories, defeats, periods of autonomy and periods of subservience to outside governments, with the city finally coming under Venetian rule from 1420 to 1797.

While the former rulers of the region were interested in Trogir for its strategic location, visitors to the city today are interested in the structures that dwell inside the walls of the city's old town. Of particular importance are the churches and buildings dating from the 13th century; the Duke's palace, which dates from the 13th century; and perhaps most impressive of all, the Cathedral of St Lawrence and the Portal of Radovan. Radovan, a master artist and Trogir native, created the intricate entryway to the cathedral in 1240.

The cultural and historical significance of the town and its architecture were verified in 1997 when UNESCO (the United Nations Educational, Scientific and Cultural Organization) added Trogir to its list of protected world heritage sites, marking the beginning of a new era in Trogir's history. While traditionally an economy focused on agriculture and fishing, this new era of the city's development will almost definitely be focused on tourism, as Croatia's coast becomes an increasingly popular destination for tourists from around the world.

Čiovo, a mountainous island in central Dalmatia, extends eastward and encloses the Kaštela bay. Well-known towns and villages on the island include Trogir, Arbanija and Slatina, as well as Okrug Gornji and Donji. The island is connected to the mainland by a small bridge in the old center of Trogir. Okrug, located on the western side of Čiovo, is made up of two districts, the Upper and Lower. The name of this place comes from the Croatian word for "circle" since both places are distributed along a circular bay. The numerous bays and beaches have made this area one of the most popular tourist destinations in Croatia. Along with beautiful spots for swimming, a wide range of sporting activities are offered on the beaches, such as scuba diving, water skiing, paragliding, as well as fitness centers and tennis courts. After a long day spent relaxing in the sunshine, there are numerous restaurants and bars along the coast, with great music, for a fun night out.

Between Split and Trogir, 20 km to the south, lies a sequence of seven small towns known collectively as ‘Kaštela’ (Castles), each centred on its own fortress. If you drive along route 8 from Split towards Trogir you will see signs directing to (Kaštel Gomilica, Kaštel Stari, Kaštel Lukšić, Kaštel Novi, Kaštel Stari, Kaštel Sućurac, Kaštel Štafilć). Most were constructed in the 16th century to provide shelter from marauding pirates or Turks. It would take the better part of a day to check out their interesting architectural features. Of particular interest is the newly built Marina Kaštela which accommodates private and charter boats. In Kaštel Sućurac, sits the oldest defensive fortress which was built in 1392 by the Archbishop of Split A. Gvaldo. In Kaštel Gomilica in front of the church, there is an oak tree over 700 years old, under which, according to the legend, Croatian king Zvonimir rested. And that’s just the beginning. All are accessible by car.

Solin, aka Salona in Italian and Latin, stands 8 kilometres outside of Split at the meeting point of the River Jadro and the Adriatic Sea and was at one time the largest Roman settlement on the eastern coast of the Adriatic sea. One of its primary historical distinctions is that it was the birthplace of Emperor Diocletian who, as we hope you know by now, erected his palace in Split and spent the rest of his days there. Solin also probably played a role in Christianity's early history. According to the Bible, Paul's student Titus traveled to the region and, because of its sea connections with Italy and the Middle East, it is likely that Solin would have attracted such emissaries of Christianity. In any event, the town's role as a crossroads of cultures and religions left behind an archaeological legacy that has earned the town the title of "Croatia's Pompeii".
Until recently, Solin depended on its cement and asbestos factories as its principal industries, which did little to enhance the image of the town. Today, due to excavations exposing the remains of the former Roman town located nearby, tourists from Trogir and Split are giving the town a much-needed economic boost. In turn, they receive the possibility to stroll among ancient ruins that are over two thousand years old. In response to this increase in tourism, Solin has dedicated itself to highlighting and preserving its natural attractions as well. The River Jadro has been carefully preserved and is dotted with loads of green areas that are a pleasure to stroll through as well, especially if you're not thrilled by the idea of exploring ancient ruins. In the end, Solin makes for a lovely day-trip from Split or Trogir and, considering the wealth of history ready to be explored there, just might be one of the best-kept travel secrets in the country that is just slightly off the beaten path.

One of the largest, most spectacular and yet easily accessible fortresses in the county is Klis, planted precariously on sheer cliffs just inland from Split. There’s an excellent view of this fortress from the highway that connects Split with the A - 1 highway. Partially restored and now an outdoor museum, the fortress is well signposted from the road. It will take you at least an hour to explore the fortress and soak in the great views in every direction. There is a café right below the fortress.
Klis has had a long and colorful history. It was first mentioned in written records in the first half of the 10th century. In the 13th century the Mongols invaded the area but never succeeding in taking the fortress. The Ottoman Turks captured it in 1537. Local nobles succeeded in retaking Klis, but only for a few weeks, in 1596. The Venetians finally evicted the Turks for good in 1648. When you visit Klis you will see why it was fought over so fiercely. Anyone occupying the fortress could control passage through the rather narrow mountain pass from the coast to the hinterland.