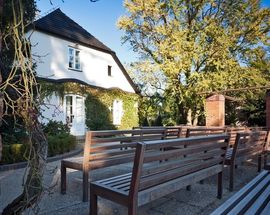 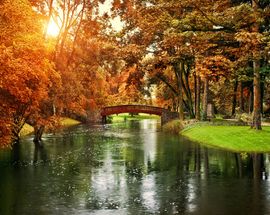 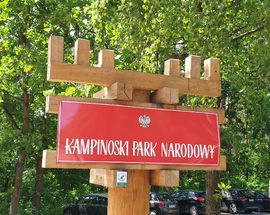 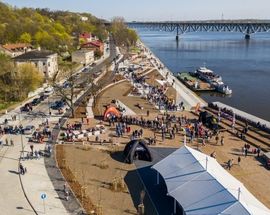 There's plenty to see and do in Warsaw, however, we understand that not all visitors are content with just visiting the capital and may wish to explore beyond the city limits for numerous reasons - be it you've visited Warsaw before, you're a student or expat in the city who's seen and done it all and wish to explore the wider Masovian region. Perfect. There's something for everyone across the whole region, from visiting sites connected to major historical events, relaxation, and outdoor activities for those looking for something more fun-filled and leisurely! Here are just a handful of our recommendations catered to individuals and groups, in no particular order... follow the links for more detailed info, including how to get to each destination.

The renovated Museum celebrates both the Historical Birthplace of the lauded composer and pays tribute to the dramatic history of the very museum itself. Half of the house has been filled with early 19th century keepsakes, instruments and paintings, and many visitors attest to the haunting spirit of Chopin that lingers throughout. Another part of the house is decorated in pre-war 20th century decor and traces the transformation of the outbuildings into a world-class museum. Outside the impressively landscaped bucolic garden makes for a nice weekend walk, and feature four Chopin monuments including one obelisk dating from 1894. As you walk around the gardens, there are craftily hidden speakers serenading you with Chopin's music.

Immediately North West of Warsaw (just 20km, heading in the direction of the towns of Łomianki or Truskaw from the city centre), Kampinos National Park is the most accessible of Poland’s national parks. The entire area covers 385km2, which is interspersed with dense woodland, dunes and marshland, criss-crossed with biking, hiking and horse-riding trails, with the forest itself being home to 81 endangered species. The past decades have witnessed successful attempts to reintroduce beaver, elk and lynxes back to the wild. Equally famous for its association with the battle for Polish independence, Kampinos’ proximity to the capital has made it a favourite camp for partisans throughout the course of history; today numerous mass graves dating from national uprisings in 1863, and 54 insurgent graves from the Home Army's 'Kampinos' group (located in the Wiersze village war cemetery) who took part in the Warsaw Uprising of 1944 can be found in the forest. None are more somber than the huge Palmiry National Memorial & Museum - a site of mass execution of civilians and intelligentsia during World War II, which is a must see.

Ahhh, spa towns, often found far from urban centres - not in this case. Located just south of Warsaw's Ursynów district in the Piaseczno county (a mere 20km from Warsaw's city centre), it's easy to get to by public transport (heading into zone 2), making it an ideal day out for couples, families, or those just eager to explore beyond the confines of the city. The beginnings of Konstancin can be traced back to 1897 when Count Witold Skórzewski (of the aristocratic Potulicki family), and owner of the Obory Palace Estate decided to found a summer resort by dividing his land into plots. In the late 19th/early 20th century, the area was known primarily for its spa and summer resorts due to its micro climate , having gained 'health resort' status in 1917. Due to its popularity, the town became a destination not only for relaxation, but also as a prime location to live, with numerous villas springing up around the town over the years. Today, they are an attraction in themselves, where you can find the majority on ul. Sienkiewicza, some in perfect condition, while others have stood empty for years and are now in various states of decay. Arriving in Konstancin-Jeziorna, you can choose to start your trip in the oldest part of the town in Jeziorna, which is now home to Stara PAPIERnia (En: old paper mill), a transformed post-industrial site, now a shopping centre with a handful of gastro points inside. Most visitors to the town choose to head to straight to the charming Park Zdrojowy (En: 'Health Resort Park'), the heart and symbol of the spa resort's reputation. The main attraction is definitely the salt graduation tower built in 1976, which people enjoy visiting, to breathe in the salty mist!

Situated in the town of Nowy Dwór Mazowiecki, 30km north-west of Warsaw, is the 19th century Modlin Fortress (Twierdza Modlin), with a collection of barracks, which in total amount to 2,250m - the longest building in Europe. It is here at the meeting point of two rivers, the Narew and Vistula, Napoleon in 1806 ordered the creation of a defensive point (he is rumoured to have designed one of the first buildings). The complex was later expanded by Tsarist Russian troops and later again by Polish troops, and indeed, was also used by the Germans. During the Russian tenure, from 1880 onwards, the main fort at Modlin became part of a larger defensive project, consisting of two defensive rings, one smaller inner circle consisting of 8 fortlets, 7-10km from the main fort, and the outer ring made up of 14 fortlets, 8-12km away. The entire defensive complex eventually became redundant as military technology and strategies evolved in the 20th century. Post-war, the fortress was used by the Polish military, but now the fort has been sold to developers who plan to create a 'town within a town' with a shopping centre, among other things, planned to be here in the future. Now is the perfect time to visit before it changes beyond recognition!

This trip can be completed in one day, even including the on-the-way town of Czerwińsk nad Wisła (en: Czerwińsk on the Vistula). Hugging the Vistula River 111km north-west of Warsaw is the city of Płock, administrative capital of Płock County in the Masovian Voivodeship. Believe it or not, Płock was also once the historical administrative capital of the Masovian Voivodeship, long before Warsaw, and maybe surprising to you, but also one time capital of Poland from 1079 to 1138 and the seat of Kings! And you thought Gniezno and Kraków were the only previous Polish capitals?! The area's importance grew with the first to Pagan Slavic tribes, and later with the Piast Dynasty, which built a fortification on Wzgórze Tumskie (En: Tumskie Hill), overlooking the Vistula River. It's around this hill where you'll find most attractions, from the Płock Cathedral (Cathedral of the Blessed Virgin Mary of Masovia) and The Castle of the Masovian Dukes in Płock the boulevards, pier, zoo and beach below, all not far from the charming old town square (Stary Rynek), surrounded by numerous museums.

If you've travelled around Poland, we can say with a degree of certainty that you already know the country's top tourist attraction happens to be Kraków's market square, the largest medieval square in Europe! But we can also say with near certainty that you didn't know the longest market square in Europe happens to be in the small town of Pułtusk! Who'd have thought? Pułtusk (pop. 19,000) is situated 70km north of Warsaw in the Masovian Voivodeship and might not find itself on many tourist itineraries, but for such a small place, its history is captivating, so much so that Varsovians regularly head here on day trips to see and experience the picturesque town. So what's so special about the town other than the architecture? Did you know the town name appears on the Arc de Triomphe in Paris? Another surprise. Napoleon stayed here a while following the Battle of Pułtusk in 1806, the area now firmly connected with the history of the Napolenic Wars. If worldly history is not enough for this small town, then astronomical intervention is required - the immediate surrounding area was the site of a meteor shower in 1868 which resulted in the highest recorded retrieved pieces to date! Another eyebrow raiser! The town has a castle, a cathedral, numerous churches to visit, along with the Ratusz (town hall) tower, which houses the Regional Museum of Pułtusk (with a viewing tower). There are also plenty of outdoor activities to enjoy such as kayaking, lounging on the beach, or taking up the challenge of forest walking and biking trails nearby!

Located 108km north-east of Warsaw, Treblinka extermination camp was built and administered by Nazi Germany in occupied Poland during World War II. It functioned from July 1942 - October 1943 for the purposes of Operation Reinhard, part of the Nazis 'final solution' to exterminate Jews - the only other camp where more Jews were killed was Auschwitz. It is estimated some 800,000 Jews were killed here and 2,000 Romani people. Unlike some other preserved camps (Auschwitz, Majdanek, for example), Treblinka was largely destroyed by the Nazis as the Soviets advanced in order to cover up the evidence of what happened there. A visit to the site entails visiting three sections over 4km (2km one way and back): the 1st, Treblinka I, which was the forced labour camp, and the 2nd, Treblinka II, the extermination camp. Towards the end, you will see the memorial, erected over 3 years and finally unveiled in 1962 to commemorate all those killed here. It isn't easy to get to, but it's a must.

This large body of water, linking 3 nearby rivers: the Vistula, Narew and Wkra, is the summer playground of Varsovians and those living nearby, who wish to get away from the city and enjoy the beaches, bars and water sports. And no wonder, as it's only 20km north-east of Warsaw. To say this place is a place of relaxation may be slightly overstated as when the good weather hits, it's quite a tight squeeze for space! This isn't always the case, and people can't be blamed for wishing to throw themselves in the water when temperatures go above 30ºC! Primarily during Spring-Autumn, the lake is full of yachts and other water faring contraptions, but come winter, the reservoir traffic turns to ice-skating (if you feel brave enough!). The public beach, pier and volleyball pitch are the most popular attractions, however, if being on a crowded beach is not your thing, the surrounding area has plenty of quiet tourist trails to enjoy.

Palmiry
/warsaw/palmiry-the-national-memorial-museum_86772v
This highly recommended museum in the forest outside Warsaw significantly ups the standard for how a small exhibit can pack a huge punch. A little history: …
see more
Places of Interest

Żelazowa Wola 15
/warsaw/fryderyk-chopin-birthplace-park-in-zelazowa-wola_19579v
The Chopin family left for Warsaw in the autumn of 1810, but even so Żelazowa Wola clearly held fond memories for the family. Close friends with the Skarbek …
see more
Places of Interest

ul. Zegrzyńska 10H
/warsaw/zegrze-reservoir_151922v
This large body of water, linking 3 nearby rivers: the Vistula, Narew and Wkra, is the summer playground of Varsovians and those living nearby, who wish to get …
see more
Places of Interest

Stary Rynek, Płock
/warsaw/plock_167925v
Hugging the Vistula River 111km north-west of Warsaw is the city of Płock, administrative capital of Płock County in the Masovian Voivodeship. Believe it or …
see more
Places of Interest

Czerwińsk Nad Wisła
/warsaw/czerwinsk_151921v
What today is a small quaint village with only 1,200 inhabitants, located 52km north-west of Warsaw and 18km south of Płońsk (the county's administrative …
see more
Places of Interest

Rynek, Pułtusk
/warsaw/pultusk_167977v
If you've travelled around Poland, we can say with a degree of certainty that you already know the country's top tourist attraction happens to be
see more
Places of Interest

/warsaw/kampinos-national-park_167884v
Immediately North West of Warsaw (just 20km, heading in the direction of the towns Łomianki or Truskaw from the city centre), Kampinos National Park is the …
see more
Places of Interest