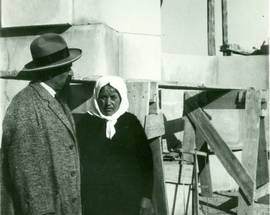 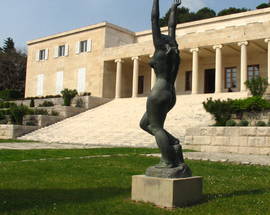 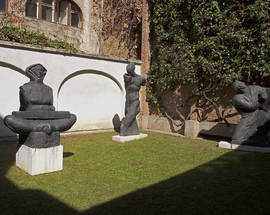 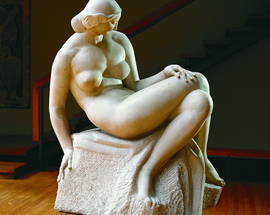 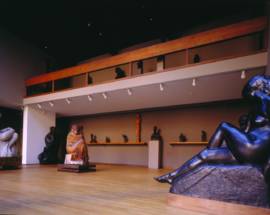 Every country has its national treasures: people or institutions that define that nation; that make it proud or simply make its people a little gladder to be alive than they would have been otherwise. One of Croatia's national treasures is undoubtedly the sculptor Ivan Meštrović. In his work you can clearly see the conflicts and passions that made him, like his statues, very much larger than life.

Many of Croatia's major cities, as well as its small towns and hamlets, boast works that are profound expressions of Meštrović’s powerful and sometimes turbulent character. Stand at the foot of the mighty statue of Bishop Gregory of Nin in Split and the most committed atheist can’t help being instilled with a sense of awe. Gaze at Meštrović’s studies of peasant women, and you can feel the essence of their culture, the artist’s reverence for his roots in the rocky Dalmatian hinterland.

Meštrović was not born in Dalmatia. Around the time of his birth in 1883, his parents moved to the village of Vrpolje in Slavonia, eastern Croatia, in search of work. There, his father Mate, a literate man and a skilled mason, found work as a labourer on the new railway. The family moved back to their home village of Otavice, just inland from Šibenik, when the young Ivan was tiny.

Meštrović was very much influenced by his childhood in the place where the Dinaric Alps plunge into the Adriatic Sea. The terrain is harsh and rocky: there, working with stone is a natural reflection of people’s connection with their environment. The tough conditions contrast with an austere but starkly beautiful culture. The rhythms of life are expressed in song, dance and crafts and are framed by the forbidding backdrop of pale rock against the dazzling blue sea.

The young Meštrović tended sheep; he drank in the ballads of the villagers and the Bible stories his mother recited by heart. He taught himself to read and write by comparing those recited stories with the pages of his father’s Bible. He tried to carve the characters from these tales in wood and stone.

At the age of 17, Meštrović’s talent for carving was noticed by a number of people who raised the money necessary to send him to work as an apprentice under a stonemason named Pavle Bilinić in Split. Split still today is a living museum with the large and well-preserved palace of the Roman Emperor Diocletian forming its core, and a magical mixture of gothic, renaissance, baroque and later architectures. It’s easy to imagine the young Meštrović walking the polished stone flags of the street and gazing up in wonder: he would go on to design some equally splendid buildings himself.

Bilinić and his wife Gina felt their charge showed exceptional promise and succeeded in bringing his talent to the attention of an Austrian mine-owner in Drniš who, among others, undertook to financially support Meštrović while he studied at the Academy of Fine Arts in Vienna. Before that could begin, however, a new challenge awaited the young sculptor: learning the German language. It’s important to remember at this point that Meštrović had never had any formal schooling.

His first years in Vienna were hard since his benefactors reneged on their promises. Meštrović rebelled against some aspects of Academy life, but his years in Vienna were formative, opening his eyes to the intellectual and artistic currents of the time. It was here that he met his first wife Ruža. Heeding the advice of Auguste Rodin (who had an enduring respect for the young sculptor), the couple embarked on a life of travel. A number of commissions, including the powerful fountain “The Source of Life” which today stands in front of the National Theatre in Zagreb, enabled the couple to spend time in Austria, France, Italy, Serbia, Switzerland, the United Kingdom and the United States.

Meštrović worked and exhibited profusely. In 1903 came the first of many exhibitions with the world-famous Vienna Secession group. In 1911 he won the grand prize for sculpture at the international exhibition in Rome, where Gustav Klimt won the first prize for painting. His circle of friends comprised the most renowned artists of the day. He created works which still stand today in countries throughout Europe and beyond. Perhaps his most famous works outside Croatia are the Spearman and the Bowman (or the “Indians”) in Grant Park (Michigan Ave), Chicago. He was the first living artist to have a solo exhibition in the Victoria and Albert Museum in London (1915) and in the Metropolitan Museum of Art in New York (1947).

Meštrović left Croatia during the Second World War after his imprisonment by the pro-Nazi wartime regime. After the Second World War he refused to live under Yugoslav communist regime so in 1947 he accepted a post at Syracuse University, New York State, and in 1955 moved to Notre Dame University, South Bend, Indiana, where he died in 1962. He was buried in his parents’ village of Otavice, Croatia.

During his lifetime, Meštrović became a member of the Croatian Academy of Sciences and Arts, the American Academy of Arts and Letters and the American Institute of Architects, and an honorary member of The Academy of Fine Arts in Vienna. He became an American citizen in 1954. His legacy includes hundreds of sculptures, medals, monuments and public buildings all over the world.

Ten years before he died, he made a gift of the bulk of his life’s work to the nation, including his family homes in Split and Zagreb and chapels in Split and Otavice. These are now Ivan Meštrović Museums and are open to the public. The year 2012 marks the 50th anniversary of the death of this remarkable man. So make a date to see some of his works.
Museums

Mletačka 8
featured
/zagreb/mestrovic-atelier-ivan-mestrovic-museums_4027v
Meštrović is arguably Croatia's most famous sculptor and artist. He actually lived with his family and worked in this house from 1920's until 1942 when he left …
see more
Featured