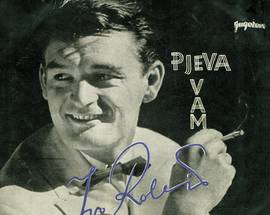 Who was Ivo Robić? This is the man who introduced American 50’s soft wave music to Croatia. This is the man who made Croatia’s first ever rock n roll album called ‘Shake, rattle n roll’. Robić was a veteran of Croatian radio and music festivals. He lived and breathed for music. He composed some of the greatest classic tracks of Croatian music culture that are popular to this day (Samo jednom se ljubi, Srce laku noć, Mužikaši, More plavo and more).

But that’s not all! Ivo Robić was the first singer in history to sing in German and get on the American (Billboard Charts) and British (UK Top Singles) with the song called Morgen (1959), for which he received the Polydor Golden Record. He appeared on the ‘Perry Como Show’, the ‘Dick Clark Show’ and ‘Ed Sullivan Show’. Robić became a true Croatian brand and an enormous export product. For his complete biography, the exhibition at the Museum of the City of Zagreb will answer all your questions.