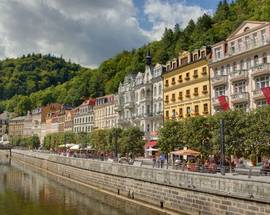 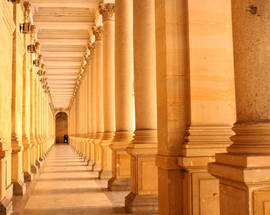 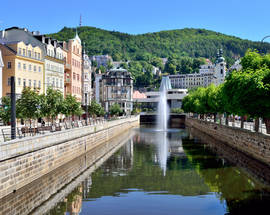 The city dates back to King Charles’ IV time when, as the story goes, he and his entourage accidently stumbled upon a thermal spring. He proclaimed it had curative powers and, in true King Charles style, had a town built around the spring. Fast forward a bunch of years and you can easily see walking through town the influence Art Nouveau had on 19th century architects. The Mill Colonnade, Emperor’s Baths and the Thermal Spring Colonnade were built then. Just about every celebrity who visited the city was thanked by Down officials with an honorary naming of some city monument or path. At the beginning of the 20th century, Karlovy Vary was one of the most popular spa cities in Europe. Two word wars and Communism saw a decline in its fortunes, with the state regulating all facilities and tourist primarily limited to Russians. Today, it is one of the most visited Czech tourist spots for foreign visitors outside of Prague. You’ll still see a heavy Russian influence in the architecture and languge translations.

For more information on all events, tours and accommodation in, call into the Tourist information, Lázeňská 1, Karlovy Vary tel. (+420) 355 32 11 76, www.karlovy-vary.cz.

Becherovka: You'll Either Love It or You'll Hate it feature
Czech Wonders of the World Day Trips
Christmas carp feature
see more
This site uses cookies. By continuing to browse the site, you are agreeing to our use of cookies. Find out more here. AGREE
Countries
Top