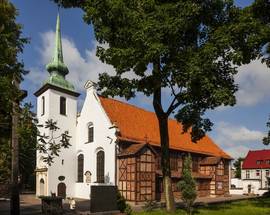 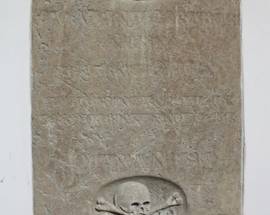 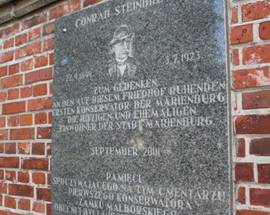 Once known as St. George's Church, a fact borne out by the rather nice stone carving to the right of the main entrance (covered by a Polish flag the last time we visited), this exceedingly Germanic beauty of a building was first mentioned in 1403 when it was recorded that the Teutonic Grand Master of the day gave it some candles. Rebuilt in the 1470s after the Thirteen Year War and again at the start of the 18th century, the church was in the hands of the Evangelical Church and then the Lutherans before becoming a Polish Catholic church at the end of WWII with the first Mass taking place on May 16, 1945. Avoiding major damage during the WWII, the church remains a delight to see both inside and out. Of particular interest is the church's original font, a bas-relief sculpture of the Passion from 1687 and the rather fine 18th-century main altar. Lying at rest in the grounds is Konrad Steinbrech (1849-1923), Malbork Castle's chief conservator and curator. Find a stone remembering him on the perimeter wall.