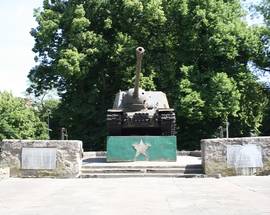 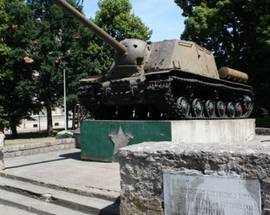 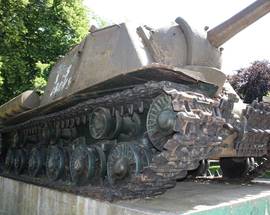 Though we call it a tank, what you see sitting on a rather unkempt concrete plinth in the middle of Pl. 3-go Maja is in fact a Soviet made ISU-122 self-propelled gun. Produced in 1943/44, the ISU-122 was a powerful long-distance anti-tank weapon and this one took part in the battle for Marienburg in early 1945. Two plaques in Polish and Russian (note the Polish has had paint thrown on it) translate as 'To the heroes of the Red Army on the 20th anniversary of the liberation of the residents of Malbork on March 17, 1965’. The place where a big red Soviet star was once mounted can be seen at the front. If you take a look around the square you’ll notice a series of beautifully renovated brick buildings which house the Polish Air Force and there is a small red jet plane jutting out over one of the nearby fences.