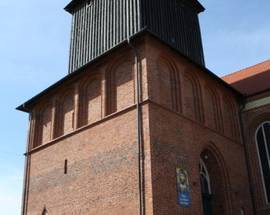 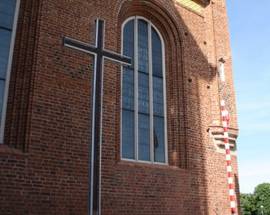 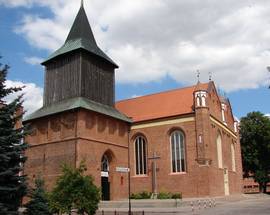 The church of St. John the Baptist has occupied this spot since the late XIII century but has taken many forms due to rebuilding after suffering damage in numerous wars. When it was originally built it was the first place of worship outside of the castle walls. This first church was completely destroyed in the Thirteen Year War between the Kingdom of Poland, with her Prussian allies and the Teutonic Order during which Malbork came under Polish rule. A new brick church with wooden belfry was built following the end of the war (between 1467 and 1523) but was destroyed once again at the end of the XVII century.

Damaged again in the battle for Malbork in 1945 the church was repaired and given to the Sons of Divine Providence, a Roman Catholic religious order, in 1957. The church contains some artefacts worth seeking out including an early XV century limestone sculpture of St. Elizabeth of Turin, a Neo-Gothic altar and two XIV century granite fonts. Pick up a leaflet inside the church for a few more points of interest but please do not visit when a service is taking place.