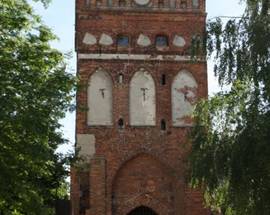 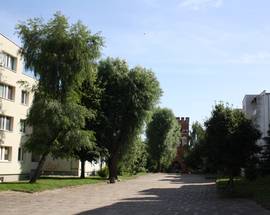 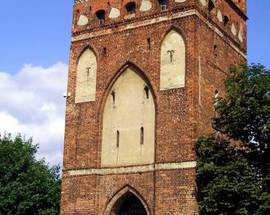 Walking south along Trakt Jana Pawła II takes you to the old town's final gem. The scruffy-looking Brama Mariacka (Mary’s Gate) like Brama Garncarska was originally built in the second half of the XIV century on the instructions of Teutonic Grand Master Winrich von Kniprode as part of a new system of defences for the town. During the centuries a moat and later a second line of defensive walls were built to protect the gate while the inside once housed a chapel. In 1838 a fire destroyed the roof which was rebuilt with a new structure added featuring a clock tower. Completely burnt out by fire and riddled with bullet holes at the end of WWII the gate stood desolate until the mid-60s when it was finally rebuilt. An external staircase was added in the 1970s and a cafe operated inside for a time before another fire in the early 1980s caused a great deal of damage inside the building which weakened the structure as well. Today it stands waiting its turn to be repaired and cleaned up and in the meantime plays host to the unusual Baszta pub.