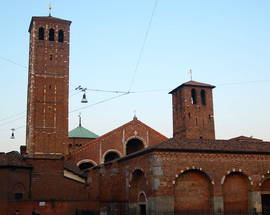 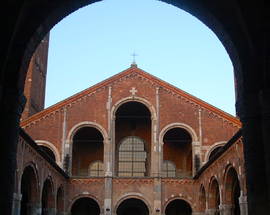 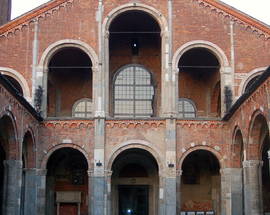 Bishop Ambrose, the charismatic patron saint of Milan, consecrated this Basilica Martyrum in 386. Local martyrs Gervasius and Protasius lie in the crypt, and Saint Ambrose himself was buried next to them in 397 (he is still on display in the crypt). The basilica was rebuilt in the Romanesque style in the 11th century, which is how it appears today. Noteably, the exterior boasts an exceptionally large atrium, the monks' bell tower from the 10th century, and the more beautiful Canon's Tower completed in 1181. The interior features biblical scenes and reliefs of the Adoration of the Magi and the Labor of Adam and Eve. The church was constructed outside the Roman city walls, but became surrounded by the city in the following centuries. Nine Italian kings were crowned within between the 9th and 15th centuries, and today it remains an important site for locals.