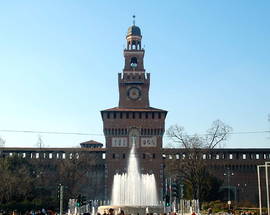 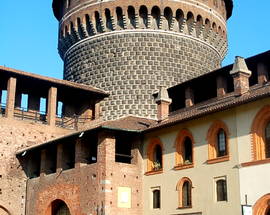 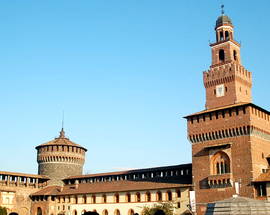 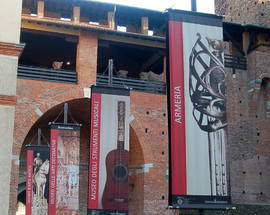 At the northern end of via Dante stands the imposing Castello Sforzesco, the city's greatest attraction after the Duomo and bursting at the seams with twelve small museums and archives referencing everything from Palaeolithic history through 20th century furniture. It was first constructed in 1358 for the noble Visconti family, and was destroyed when they were ousted. The Duke of Milan, Francesco Sforza, restored it to its original splendour in the 1450s to be his princely residence, enlisting such painters as da Vinci and Bramante to create the frescoes. During Napoleonic rule its use was reduced to military purposes, and it was not until the unification of Italy in the 19th century that the castle was transferred to the city of Milan. The sprawling Parco Sempione just behind, one of the largest parks in the city, was created on the former parade grounds.

Visitors enter past the fountain through Piazza d'Armi; from there, gates lead into the Rocchetta, the oldest part of the castle (on the left), and on into the Cortile (Courtyard) and Palazzo della Corte Ducale (on the right), in Renaissance style. The entrance to the Civici Musei collection of museums is here. Continue to the other side to cross the empty moat and enter Parco Sempione.