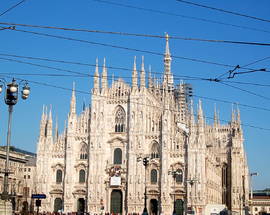 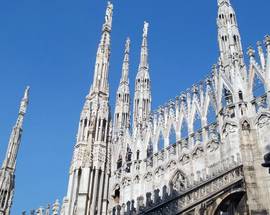 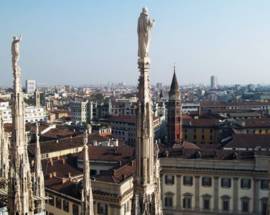 A masterpiece of flying buttresses, 135 spires and 3200 statues, Milan's Gothic Duomo is truly breathtaking to behold. It is the third largest church in Europe (behind St Peter's in Rome and the cathedral of Seville), and certainly one of the grandest buildings in the world. It was commissioned in 1386 by Gian Galeazzo Visconti with a congregational capacity of 40,000 - in those days, the population of Milan. Construction was begun in brick upon a site that had been associated with places of worship since the 3rd century, but eventually the architects upgraded it to Condoglian marble shipped from Lake Maggiore. Grandiose as it is, the cathedral took nearly five centuries to complete, and the façade, which is baroque up to the first order of windows and neo-Gothic above, was not put on until Napoleon's order in 1805 before he crowned himself king of Italy.

To appreciate the full scale of the church, head to the left side of the exterior to take the lift (or stairs, if you're brave and fancy a lower price) to the roof, which affords unprecedented proximity with the architecture and, on a clear day, offers views of the Alps. Also to be seen is the Madonnina (1774), the copper-gilded figure of Mary on the church's highest spire.

Once in the echoing and equally majestic interior, note the 146 stained-glass windows and the 52 pillars of the five aisles representing the weeks of the year. The ceiling appears to be carved, but in fact it is a trompe l'œil. The sundial on the floor near the main entrance is so precise that it was once used to regulate clocks throughout the city. The remains of earlier churches and the Baptistery can be reached via the stairs to the left of the main entrance.