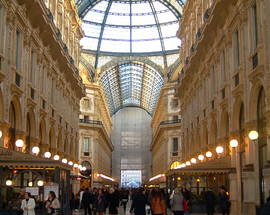 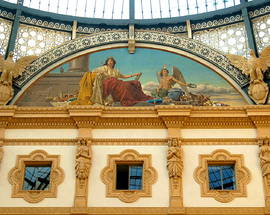 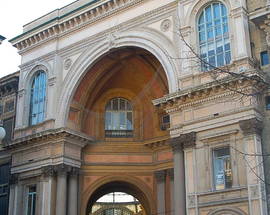 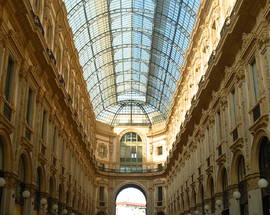 Affectionately known as il salotto di Milano (Milan's living room) for its importance as a social meeting place, this arcade is one of the world's oldest shopping malls. It was designed and built by Giuseppe Mengoni, who directed the complex construction of the iron framework and glass domes based on the historic arcades of Paris. In 1867 Vittorio Emanuele II, king of the newly united Italy, presided over the grand inauguration. In an ironic twist of fate, however, Mengoni fell to his death from the triumphal arch just one day before the galleria was completed in 1877. The architect left behind a historical legacy, as the project was carried out during the turbulent period of Italian unification, and represented a new era of national confidence. The interior is filled with symbols of patriotism, the most famous of which are encoded directly into the mosaic floors. Try to spot the wolf for Rome, the lily for Florence, the bull for Turin and the white flag with a red cross for Milan. Placing the heel of your foot on the genitals of the bull and spinning around is said to bring good luck; needless to say, this section of the floor is perpetually blocked by tourists and the mosaic requires constant renovation.