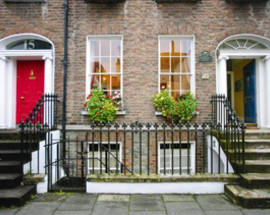 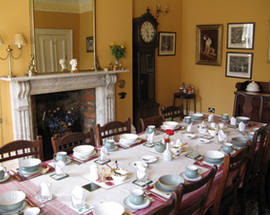 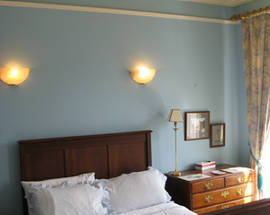 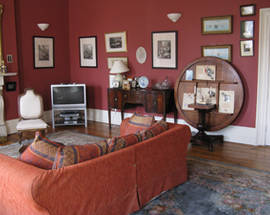 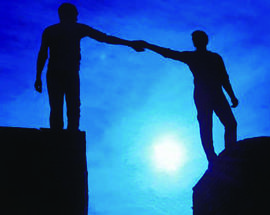 Envelope yourself in the unstuffy luxury of this 19th century townhouse, perfectly positioned just beyond the city’s historic walls. From its iconic Georgian door to high ceilings and original plasterwork, each authentic detail evokes this grand dwelling’s esteemed past.

Before genial owners Joan and Peter Pyne transformed it into an eight-bedroom B&B, previous residents included merchants, ministers, bankers and even a local butcher. A display of newspaper cuttings and old photos retell its centuries’ old story.

Discerning travellers often overnight here as part of their round-Ireland sojourn. Converse in the elegant drawing room with its glistening chandelier and feature marble fireplace.

And so to bed...
Eight bedrooms range from singles and family, and each has its own colour scheme and period details. You can also get your Flintstones groove on in the basement room with its whitewashed exposed stone walls, two double beds and comfy sofa. Most bedrooms are en suite but not all, so book your preference in advance.

How do you like your eggs in the morning?
Enjoy your cooked buffet breakfast at that communal table as you compare travel tales with fellow guests. And ask Joan for her homemade yoghurt recipe and snippets of local info only a native would know. The local food provenance continues through to the breads, preserves and sausages… the former resident butcher would most definitely approve.

And there’s more
The Pyne’s love of history and architecture has seen them restore several other local properties. Saddler’s House B&B has seven en-suite bedrooms within a gracious Victorian building. While self-catering fans can stay at 19th century Cathedral & Darcus Cottages and Pump Street Apartments near St. Columb’s Cathedral, or the 1950s Crawford Apartment just beyond the walls. There’s free Wi-Fi in all properties, and you can even bring your pet. On-street car parking can vary from free to restricted, so check ahead.

Out and About
Being N. Ireland’s second largest, and Ireland’s fourth largest city, Derry~Londonderry is replete with a fantastic array of bars, restaurants, shops, cultural venues and visitor attractions. Its 17th century walls provide a panoramic passage through time and overlook the Bogside, site of the infamous Bloody Sunday atrocity and home to some of NI’s most iconic political murals. Opened in 2011, the shiny Peace Bridge straddles the River Foyle, linking the Walled City with the Waterside’s newly re-developed Ebrington Square. And you’re well-placed between the beautiful wilds of Co Donegal and the enduring allure of the Causeway coast.