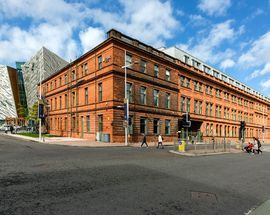 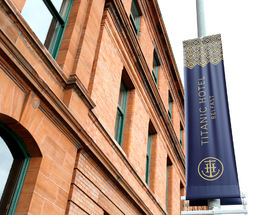 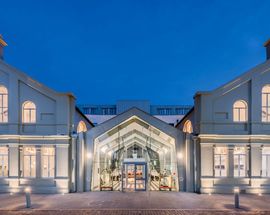 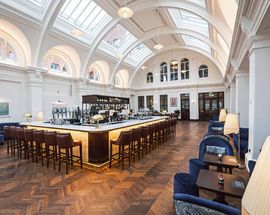 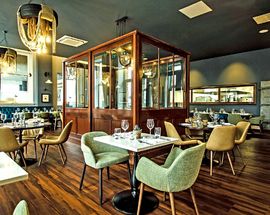 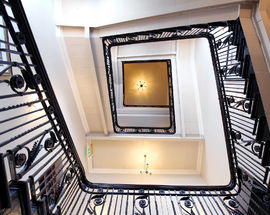 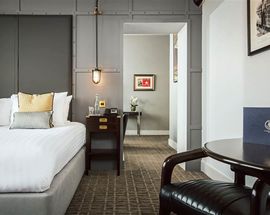 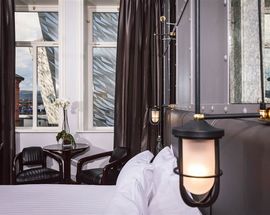 Belfast is experiencing a boom in hotel building, so it pays to have a unique selling point to stand out from the crowd. And they don't get much better than the new Art Deco Titanic Hotel, located in the old Harland & Wolff Drawing Rooms and offices where the ship herself was designed, and right next to the Titanic Belfast attraction.

The hotel is a clever combination of restored listed buildings and contemporary extension, giving the city 119 luxury bedrooms and suites. To reach my sumptuous suite on the third floor, I had the choice of lift clad in a period black and gold gilded design, or original grand staircase displaying fascinating pictures of the shipyard’s glory years and stories of famous White Star Line passengers such as Churchill and Edward VIII.

Walking along the corridor felt as though I was on an ocean-going liner. Each door had rows of rivets, and room numbers were floodlit onto the walls with light shining through carved metallic blocks similar to the large TITANIC sign outside.

Entering the room through our own riveted door, I was thrilled by the views over both Titanic Belfast and the slipway. Not only were there more ship designs, photos and White Star Line paraphernalia on walls and tables, but the television showed a Titanic channel with a variety of fascinating programmes about the shipyard, history of Belfast, development of Titanic Quarter and the tragedy of Titanic’s maiden voyage. A clever and unexpected feature in this most appropriate setting.

But we all demand more from our rooms than views and history, and I loved my comfy king-sized bed, one of two in our suite, and fabulous warm and powerful shower. The separate seating area, with its corner location affording those fab views, was an added bonus. Throw in all the expected creature comforts, including tea & coffee, hairdryer, safe and ironing board, and this is one very special overnight option.

After freshening up, it was downstairs for a quick tour courtesy of concierge Paddy. I was shown around the ground floor offices including those once used by Titanic designer Thomas Andrews, who went down with the ship, and Harland & Wolff Chairman Lord Pirrie, who imfamously declared Titanic "unsinkable". Like the rest of the hotel's original footprint, each room has been meticulously restored to its former grandeur, and is available for private hire.

At the original entrance is the evocative Telephone Exchange space where the terrible news of April 1912 first arrived. And on the first floor, now used for Afternoon Tea, is the Presentation Room. Overlooking the main Drawing Room, this was an opulent area where investors were entertained and flattered. Today it has resumed its role as a truly gorgeous social space.

After the tour, it was time for dinner and a drink in the magnificent three storey high Drawing Room with its unique barrel-vaulted ceiling. Nautical features catch the eye at every turn; from a large model of Titanic to maritime paintings, rolled-up ship design scrolls and quirky shipyard facts embedded on every table. Serving staff in period-style uniform also help transport diners to the shipyard’s, and indeed city’s, seafaring heyday. Caught up in the treasures of the sea, I opted for fish and chips... delicious.

An identical Drawing Room, on the other side of the reception area, is used for private hire. A college formal was taking place on our night, and what a location it would make for a wedding reception. The Harland Bar is a sophisticated drinking space serving, among other classic tipples, Titanic-themed cocktails. And the Wolff Grill is the place to head for fine dining and Sunday lunches overlooking the big silver Titanic Belfast building.

After a relaxing sleep in one of the suite’s two double beds, it was down to breakfast in the Wolff Grill. A buffet style, the choice was superb. I helped myself to salmon, smoked mackerel and delicious parma ham. And I was particularly drawn to the block of honeycomb, not something you see every day. Needless to say, it tasted good, if a little messy.

And so ended my stay at this gem. Other maritime hotels exist; indeed, other Titanic hotels exist. But, here, luxury is blended with authenticity, which makes Titanic Hotel one of the city’s bucket list stays. For the latest rates and offers and to book your stay, visit www.titanichotelbelfast.com. Titanic Hotel Belfast, Queen's Road, Titanic Quarter, Belfast BT3 9DT, tel: +44 (0)289 508 2000.