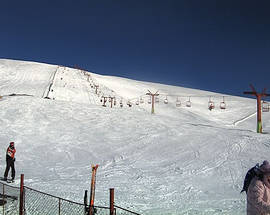 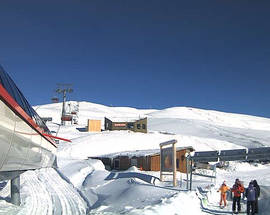 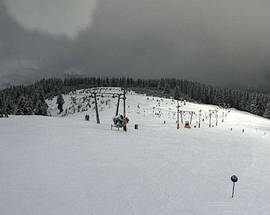 For decades Romania was considered a good-value place for a skiing holiday, with cheap prices offsetting a somewhat limited amount of slopes and an unreliable snow record. These days, alas, it could be argued that the opposite is true.

The country’s two biggest resorts - Poiana Brasov and Sinaia - have both spent big money over the past couple of years investing in new lifts and slopes, but the cost of lift-passes and - especially - accommodation mean that neither can still be considered budget-destinations. Poiana Brasov especially has become a highly exclusive resort in recent years.

The closest ski resort to Bucharest is Sinaia (alt. 880 metres) less than two hours on the train (even less by car, if the traffic is not too bad) from the capital. Once a quiet monastery settlement in the Prahova Valley, Sinaia became a mountain retreat and resort town with the construction of King Carol I’s summer residence Peles Castle in the 1880s. A direct railway connection to Bucharest was subsequently built allowing courtiers easy access to the palace, and the resort quickly became the summer retreat of choice for the Romanian capital’s wealthy. A casino was built in 1912, by which time Sinaia was so smart it had become a stop on the Orient Express’s route to Istanbul.

As such, there is much to do and see in Sinaia even if downhill skiing never crosses your mind, and is the best choice of Romanian mountain destination for groups which include non-skiers.

First things first: when the weather is good, there is snow in abundance and there are no queues for the lifts, skiing in Sinaia is excellent, and the best in Romania by a long way. Unfortunately, the last time Sinaia enjoyed such blissful conditions was around 1963. (We only half jest). Most of Sinaia’s skiing is done at altitude, making it the most snow-sure of the Prahova Valley resorts. Even when the other resorts lack snow, there can often still be plenty of the white stuff up on Sinaia’s highest slopes.

Sinaia’s skiing is reached either by an old, two-stage cable car, or a newer gondola. The cable car station is behind the Montana hotel, while the gondola lift departs a little further up (it is a bit of a trek if you are walking, especially with skis). The cable car tips out at 1400 metres, where there is a hotel and a couple of bars and ski-rental shacks. From there, you can take the second stage of the cable car up to 2000 metres, or a four man chair-lift. Far quicker is the gondola, which continues through the mid-station up to 2000 metres.

Once up at the top, there are two large, relatively easy and wide open ski areas: Valea Dorului and Valea Soarelui. There are also a number of routes back down to Cota 1400: these are some of the toughest slopes in the country. If there is enough snow, there is a route down to the resort from Cota 1400, although it does involve a fair bit of poling in certain places.

The biggest problem at Sinaia remains the fact that two different companies operate the cable cars, gondolas and chairlifts, and there is therefore no lift pass covering the whole resort.

However, you can now more or less ski every slope in the resort by making use of just the gondolas and the Valea Soarelui chairlift, which are operated by Sinaia Town Council A daily lift pass costs 145 lei for adults, 100 lei for kids. If you use the cable cars or Valea Dorului chairlift you will need seperate tickets. There is a good website dedicated to skiing in Sinaia (with daily updates regarding snow conditions): sinaiago.ro.

You simply can’t visit Sinaia without seeing Castle Peles. Perched upon a rolling hill and set against the stark beauty of the Carpathian mountains, this magnificent castle appears to be extracted directly from a Grimm Brothers’ fairy tale. The first king of Romania, Carol I, visited Sinaia in 1866 to stay at the monastery, and fell in love with the place. Seven years later he bought the grounds and had Wilhelm Doderer, a German architect, build the palace in 1873 as a retreat from the summer heat in Bucharest. After the work was done in 1883, Carol immediately ordered an expansion to be built, finished in 1914. Visitors can view a large collection of European arms from the past five centuries and explore exotic rooms, decorated by artists from all over Europe. Some rooms are meant to be replicas of Turkish and Moorish castle halls, others are ‘simply’ decorated in German Neo-Renaissance style. Tour guides are quick to point out that Peles was the first castle in Europe to have both electricity and central heating.

Just up the road is Pelisor Castle (Little Peles), built between 1899 – 1902 and inhabited by Ferdinand, King Carol’s cousin, and his wife Marie. Marie had her own idea about how to decorate castles, and set to design Pelisor’s interior in a simple Art Deco style. Especially impressive is the Golden Room, where gold leaves cover the walls and ceiling.

The main attraction of Sinaia’s raison d’etre, the 17th century monastery (named after the biblical Mount Sinai) is the old church inside the monastery walls, built between 1690 – 1695. The frescoes in the portal depicting Judgement Day are stunning. On the left, happy believers wait in line to enter paradise, while to the right little devils drag sinners into a river of fire leading to the mouth of a dragon. In the far corner of the monastery, you can enter the Paraclis, a chapel once used by monks for daily services. The frescoes here are more than 300 years old, and the sign on the iconostasis kindly requests visitors not to scratch their names into the valuable walls – as you will see, some people just couldn’t resist the temptation. Next to the old part of the monastery is the bigger new church, built by monks under the supervision of Abbot Iosaf from 1842-1846. It is a perfect example of Romanian religious architecture which blends certain stylistic elements from Moldavia and Wallachia. This amazing house of worship displays ornately carved oak objects and beautiful Neo-Byzantine gold leaf murals.

A small museum and a shop which sells religious icons and literature are also open to the public, although during winter they keep irregular hours. Best to come between 10:00-15:00 and hope for the best.

Busteni (alt. 900 metres) is a town similar in size to Sinaia, but lacking most of its better-known rival’s charm. As a ski resort, it has little to offer asides from one of the most modern chair-lifts in the country, and two relatively long, snow-sure slopes to accompany it. The problem is that there are just the two slopes which, as you might expect, can get rather crowded. There are no lift passes per se, each ride up on the chairlift costing 19 lei for adults, 9 lei for kids. One of the slopes is floodlit.

There is also a cable car at Busteni, and while it does not offer access to any skiing it does climb high into the Bucegi mountains and offers great views. In summer a number of hiking routes begin from here, and close to the top station is The Sphinx: a natural outcrop of rock that bears an uncanny resemblance to the the Great Sphinx at Giza.

The enormous cross close by (on top of the Caraiman peak, and visible from the valley below) was built from 1926-8 in honour of those soldiers who died defending the railway line from the Austrian and Hungarian armies in World War I. Almost 100 feet (30 metres) high the cross is the largest of its kind in Europe. Tickets for the cable car cost 70 lei return for adults, 36 lei for kids.

Azuga (alt. 950 meters) is a further eight kilometres up the road from Busteni, and is often overlooked when considering possible Romanian skiing destinations. It is in fact a decent choice for a day on the slopes, and offers two of the longest ski runs in the country (indeed one, Sorica, is said to be the longest piste in the country). Granted, it is not the most extensive ski resort in the world, but the fast gondola lift keeps queues to a minimum, and the ample nursery areas mean that beginners can stay away from the more demanding slopes. Lift passes cost 140 lei per day (kids - up to 12 years - 100 lei).

Much like Azuga, Predeal offers limited skiing but is a good choice for a day trip: the resort is easily reached from Bucharest both by car and by train. There are plenty of good places to eat too: two of our favourite restaurants in Romania are in Predeal: Cabana Vanatorilor and Casa Romaneasca. Situated at an altitude of 1107 metres, it is officially the highest town in Romania.

There are three main slopes at Predeal, all reached by a relatively new four-man chair lift. Two of the runs are fairly easy, while one, which passes under the chairlift, is far more difficult. There are limited nursery areas at Predeal, which means that the bottom slopes can get very crowded, especially at weekends and holidays. In our experience, we have always found the slopes at Predeal to be the best groomed in the country, often meaning that the snow lasts longer here than elsewhere. Lift passes cost 140 lei per day (kids - up to 12 years - 72 lei).

The best known Romanian ski resort, Poiana Brasov sits at an altitude of 1030 metres, a short climb up from the city of Brasov (about 20 minutes by car). It's a fabulous spot, home to one of the best restaurants in the country, but has suffered somewhat from over-development. It remains the ski resort of choice for Romania's rich set.

We have an extensive guide to Poiana Brasov here.

Getting to the Mountains

The main road to all of the ski resorts is impossibly busy at weekends, and can be blocked for hours on end during holiday periods. At Busteni - where the road passes through the town - there is a bottleneck which can cause tailbacks as far as Comarnic in one direction, and Predeal in the other. If travelling at busy times you really should therefore think about taking the train. All trains from Bucharest to Brasov stop at Sinaia, Azuga and Predeal. Most also stop at Busteni.

Given their low altitude, it is no surprise that Romania’s ski resorts do not have the best of snow records. The only real snow-sure skiing is at the top of Sinaia in the Valea Dorului and Valea Soarelui, though even here high winds can often close the cable cars and gondola, preventing access. There should usually be enough snow in all the resorts from December until the end of March, although in 2016 there was skiing in Sinaia and Poiana Brasov as late as the last weekend in April. While most of the resorts have a couple of slopes which have snow-making machines, these only cover beginner and nursery slopes and if they are all that’s available, they become horribly crowded. To find out what snow conditions are like, the best source is probably www.romaniaturistica.ro/info-schi.