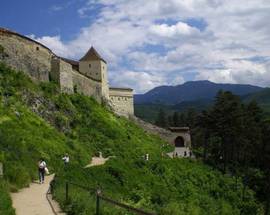 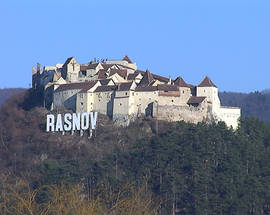 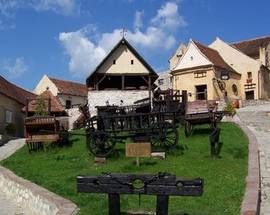 Approximately halfway between Brasov and Bran, the town of Rasnov was founded around 1225 by German Teutonic Knights. Rasnov’s impressive fortress - it really does look the part, although the kitsch, Hollywood-style Rasnov sign in front of it somewhat dampens its dramatic impact - was built in the 14th century to protect the people of Rasnov and surrounding villages from the numerous invasions happening at the time. During periods of war, the townsfolk would pick up their cattle and retreat into the fortress.

After two sieges ended in surrender because of a lack of water, a 174m deep well was dug by two Turkish prisoners: it took them 17 years and the pair were rewarded with their freedom on completion. In 1658, the Rosenauers had to retreat here for three years while war raged on the plains below. The last siege took place in 1690 (Turks again; they lost), after which the fortress was severely damaged by fire (1718), rebuilt (1719) and partially levelled by an earthquake (1802).

The last use of the fortress as a refuge was during the revolutions of 1821 and 1848, when Romanian refugees and revolutionaries resided here. Although much of the fortress has been renovated over the past decade, work still continues on some buildings. The views from the top of the fortress over the plains and mountains are magnificent, and a lack of tourists makes the place feel much more authentic than Bran Castle. To reach the fortress, climb up the steps from the square immediately below, or be lazy and drive up the road towards Poiana Brasov, and turn left at the Cetate sign. There is also a funicular up to the fortress from the town centre.

Rasnov is also home to Dino Parc, a dinosaur theme-park featuring a large number of life-sized dinosaur models spread out amongst the trees in a park right next to the fortress.

In Rasnov itself, the Saxon (Evangelical) church - the only protestant church left in the town - is well worth a visit. It dates from 1394, although it has been remodelled and renovated a number of times since, lastly in 1774-5, when it took on its current baroque appearance. The altar dates from the 17th century, while the two huge bells - made in Vienna - were added only in 1927. Find the church just south the town’s main square.

To get to Rasnov by public transport the best way is by minibus: these leave every hour or so from Brasov’s Autogara 2. The journey takes about 30 minutes. A funicular links the centre of Rasnov with the fortress. The journey takes less than a minute.