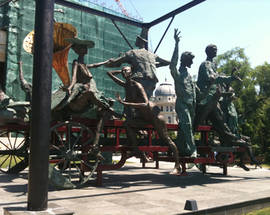 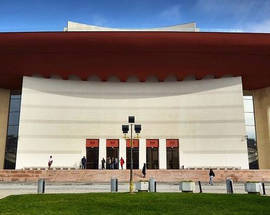 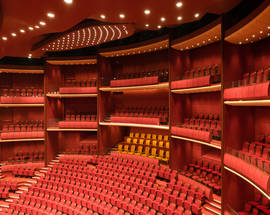 A building in three parts. The original National Theatre was built between 1967 and 1970 to the design of three Romanian architects, Horia Maicu, Romeo Belea and Nicolae Cucu, and was rather abstractly styled to honour the architecture of Moldova’s famous monasteries. Unfortunately, the building was then ruined in 1984-5 when a grey, concrete, vaguely neo-classical casing was placed over the earlier structure. That ugly casing, however, was removed in 2011 when the theatre began to take on its current shape. As such, the colourful red and white theatre once again looks much like the construction the original architects envisaged, although there are major differences inside the building. There are now a number of new, smaller auditoriums alongside the main stage, which is itself more flexible then before, and more able to accommodate outside-the-box productions.

The legendary Laptaria lui Enache, a smoky late-night bar on one of the theatre's upper levels, did not survive the refurbishment, although there are plans to reopen (at some stage in the future) La Motoare, the theatre's equally legendary roof terrace: preferred drinking venue of Bucharest's students for decades.

The odd statue in front of the theatre is called the Caruta cu paiate, a tribute to Romania's best loved playwright, Ion Luca Caragiale. It features characters from Caragiale's plays, and was unveiled in December 2010.