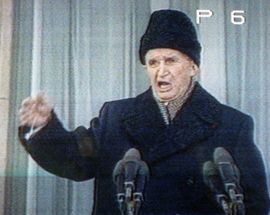 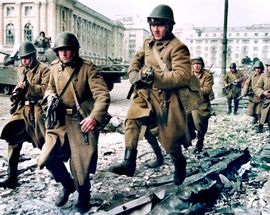 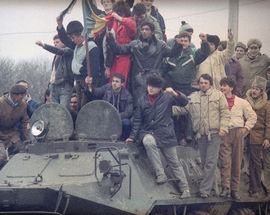 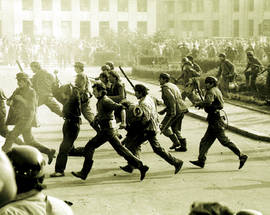 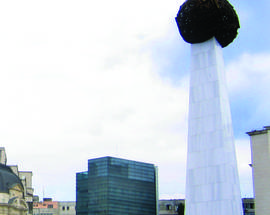 While the Romanian revolution of December 1989 remains one of the first images of the country that foreigners conjure up, few remember the even bloodier Mineriada of June 1990. The madness of those June days, when at least 100 people were killed, 700 were injured and several thousand illegally arrested in a brutal, three-day long, government-approved riot, will forever cast a very dark shadow over Romania and its revolution.

The revolution and Mineriada are linked: the latter had its roots in the former; in the downfall of Romania’s communist regime. To this day the real stories behind both events remain well guarded secrets, and all we have to go on are best guesses.

The revolution began in Timisoara, in the west of Romania, in mid-December 1989.

By this stage, Romania was a failed country. Food and energy shortages were so serious that even hospitals suffered power cuts as there was no fuel for their generators: new born babies on ventilators and adults on life-support died.

Yet as late as November, all seemed well for Nicolae Ceausescu. He had been reelected president at the Romanian Communist Party's congress (unopposed, as was the custom) and there were few signs that his downfall was imminent.

Always a city whose people were better informed than the rest of the country (they could watch Yugoslav television) the population of Timisoara staged the first of many demonstrations on December 16, 1989 initially in protest at the demotion and transfer (for openly opposing the Nicolae Ceausescu regime) of a popular local Hungarian pastor, Laszlo Tokes.

Quickly however, the demonstrations became political, and spread. On December 17 tens of thousands gathered in front of the city’s Orthodox Cathedral. Ceausescu ordered the army to fire on the protestors, which it did. There were many deaths. The protestors dispersed and the next day the city was calm, with soldiers and secret policemen everywhere; Ceausescu proceeded with a planned two-day state visit to Iran.

Ceausescu returned on December 20, and a huge rally was organised in Piata Revolutiei in Bucharest for the next day, to reassure the population that he was still in control. He wasn’t.

On the morning of December 21, 1989, the large crowd brought in to dutifully cheer Ceausescu in the time-honoured way in fact jeered him - on live television. The dictator's face when he realises he is being booed is astonishing, and has been called his ‘Dorothy Moment’ in reference to the scene at the end of The Wizard of Oz when the facade of a great mysterious power is torn down to reveal nothing more than a frail old man

The rally then quickly became a riot, and the crowd was dispersed only by gunfire. The rioters regrouped, however, in Piata Universitatii, where battle lines were drawn in front of the InterContinental hotel. Shortly before dawn on December 22, a pitched battle between revolutionaries and the militia took place, and ended with hundreds of arrests. For a couple of hours all was calm, and the regime looked to be back in control. However, during the night the army had abandoned Ceausescu (following the mysterious death of Vasile Milea, the army’s commander-in-chief), and the pendulum swung decisively.

At about 10am the revolutionaries regrouped once again: in Piaţa Revolutiei, Piata Universitatii and at the headquarters of Romanian television. A fierce battle was fought here, but by the evening of December 22 the revolutionaries - with army assistance - had gained control of the television building. That night the poet Mircea Dinescu made the first speech on free Romanian television, ending with the immortal words:

'Dictatorul a fugit. Am învins! Am învins!' (The dictator has gone. We’ve won! We’ve won!)

By this stage Ceauşescu and his entourage had indeed gone, fleeing with his wife Elena in a helicopter from the top of the building of the Communist Party’s Central Committee in Piata Revolutiei as the angry mob entered below. The couple were caught a few hours later, and shot (after a mockery of a trial) in Targoviste on Christmas Day, 1989.

The power vacuum Ceausescu left was quickly filled. Ion Iliescu, a one-time loyal lieutenant of Ceausescu and life-long communist formed a provisional government based around what he called the National Salvation Front, or FSN. It is important to note that though this new government was allegedly an independent body representative of every sector of Romanian society, Iliescu refused to allow any surviving members of Romania’s pre World War II governments to join. Important figures - including Corneliu Coposu, a leading liberal politician of the 1930s and 1940s who had served time in Romania’s brutal communist prisons – were prevented from entering the Central Committee building, where various factions were trying to form provisional governments. A bust of Coposu now stands opposite the building, on the other side of the road in front of the Cretulescu Church.

Iliescu’s new regime initially stated that it would be nothing more than a transitional government. Late in January 1990 however, Iliescu announced he would stand for election as president, and that the FSN would field candidates for parliament. Given that Iliescu and the FSN had complete control of every facet of government, including a media-monopoly, their crushing victory in elections (held in April 1990) was hardly surprising. Unhappy with what they viewed as one dictatorship replacing another, large numbers of protesters began demonstrating in Piata Universităţii in late April.

Led by students from Bucharest University the demonstrators soon occupied the entire square, declaring that it was the only part of Romania genuinely free of communism. As support for the protests grew, it became an embarrassment to Iliescu and his regime. On June 13, 1990, Iliescu ordered miners from the Jiu Valley to Bucharest to brutally put down the revolt, and to ‘reoccupy the square in the name of the revolution.’ Over the next three days the miners killed more than 100 people. Iliescu then went on television to thank the miners for their ‘revolutionary zeal and spirit.’

Those student demonstrations of 1990 should have acted as a catalyst for real change in Romania. It can be argued that their revolt was in fact the real Romanian Revolution; one quashed, however, by the neo-communist Iliescu regime. Iliescu’s last act as president before he finally left office in 2004 was to pardon Miron Cozma, leader of the miners in 1990. Local outrage at the pardon forced Iliescu to revoke it the next day, and Cozma remained in prison until 2008.

Iliescu was himself investigated for his role in the events of June 1990, yet was found not to have any case to answer for. The families of those killed may disagree.

Of many, many books written about the revolution, by far the best is Peter Siani-Davies The Romanian Revolution.

Piata Revolutiei
featured
/bucharest/piata-revolutiei_14796v
It was here, at around 10:30 on December 21, 1989, that the Nicolae Ceausescu regime began to crumble. A large crowd of well
see more
Featured
The Romanian Revolution

featured
/bucharest/piata-universitatii_14797v
Ten stone crosses on the traffic island in the middle of B-dul Nicolae Bălcescu pay homage to those killed during the revolution, while a black cross at number …
see more
Featured
The Romanian Revolution

Calea Dorobantilor 191
/bucharest/romanian-television_14798v
Scene of one of the fiercest battles of the December 1989 revolution, it was from the broadcasting rooms in this building that the end of the Ceausescu regime …
see more