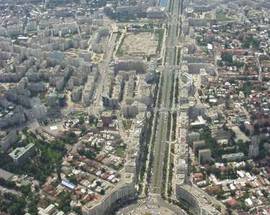 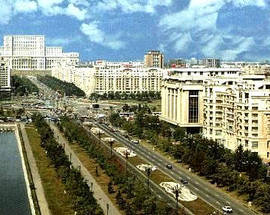 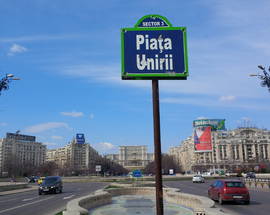 Of all the atrocities committed on Romanian territory in the name of socialism, few rank as monstrous as the destruction of an entire district of the capital to make way for the Centru Civic, or Civic Centre. Str. Uranus was completely razed to the ground, as were most of the streets running from it.

The centrepiece of the Civic Centre, Casa Poporului, stands on the site of the Republic sports stadium, a wonderful art deco construction based on Rome's Olympic Stadium.

Churches, houses, hospitals and even a monastery also had to make way for Casa Poporului, and for the five kilometre long B-dul Unirii, which stand today as little more than monuments to madness. The northern end of B-dul Unirii has become a ghost town while the Casa Poporului itself survives as the site of the Romanian parliament, and is rather worryingly the city's most popular attraction.

It should also be remembered that the Centru Civic is larger than most people think: it stretches from the JW Marriott Grand Hotel in the west (which was designated as a hotel as part of the original project, although never intended to be a Marriott) to Piata Muncii in the east. It accounts for about a sixth of the city's total size.

Though intended as a grand statement of ambition and as a showpiece of socialism (the original name of B-dul Unirii was Bulevardul Victoria Socialismului - Victory of Socialism Boulevard) shabby workmanship and use of poor quality materials mean that the monumental apartment blocks that line B-dul Unirii, Decebal and Calarasilor are - despite being just over 20 years old - looking somewhat worse for wear. Nicolae Ceausescu's biggest legacy has not weathered well.

Piata Unirii 1
/bucharest/unirea-shopping-centre_14588v
Half-decent if dated shopping centre in the heart of the city. A big Mega Image supermarket can be found in the basement, and there's a large number of …
see more