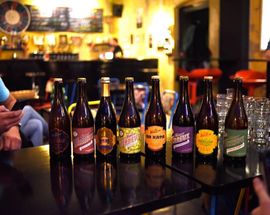 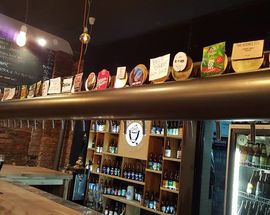 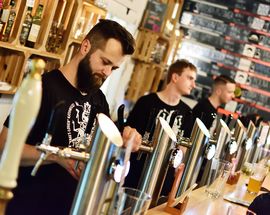 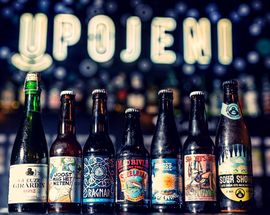 After a dozen or so hangovers (and extra trips to the shop for bog roll), Polish beer generally leaves one with an understanding of why vodka is so popular in Poland. Silesia has the honour of being home to the two worst offenders – Tyskie and Żywiec – which enjoy ubiquitous national distribution and sadly also bear the mantle of Polish beer abroad. Basically a diet of these two gets boring fast for anyone with a real affinity for beer. What too often goes unrealised is that Poland actually has hundreds of independent micro-breweries that produce delicious beer. More and more bars in Katowice are popping up serving ambitious brews from tap and bottle. Some are even declaring it to be the year of beer!

Biała Małpa has perhaps the largest selection of draft and bottled beers in Katowice and will even please the fairer sex with their offerings of enhanced beers (think berry beer, chocolate beer and lemon beer). They offer a constantly changing selection of craft beers from around the globe but with a specific emphasis on the many Polish micro-brews gaining prominence. Beer experts, buckle up!

It’s super trendy, but the beer in ul. Mariacki’s Kato is also super tasty. The selection of bottled micro-brews is always in flux but there are plenty to choose from; we recommend Magnus, a sweet dark beer from the Jagiełło Brewery in far eastern Poland. If you’re looking for something more local, head to Kontynuacja or Absurdalna to try a draught from one of the many local micro-brewers that have popped up in the region in recent years. At either place you can try a brew from Kraftwerk - these electro pop piwo pioneers are concocting some of the best Silesian beer, if not best Polish beer around.

If you want to stack these national ales against their Czech counterparts make sure to stop into Hospoda and immerse yourself in a sea of Czech suds from Kozel Dark to Rychtar to Radogast. If German Beer is your thing than head to the brand new Browariat for a bucket of Bavaria's finest brew. If it's multi-tap you want, head to Upojeni with their fine selction of craft beers. The last of the great new breed of beer pubs is Namaste Traveler's Club which has a solid offering of micro-brews on tap but perhaps the most impressive list of domestic and imported bottles in the city. Na zdrowie (‘to your health’); literally.

ul. Jana III Sobieskiego 27
/katowice/namaste-travellers-club_117087v
Yet another great bar for Katowice’s beer aficionados. They offer a constantly fluctuating cast of different casks pumped out of 7 taps as well as over 80 …
see more
Bars & Pubs