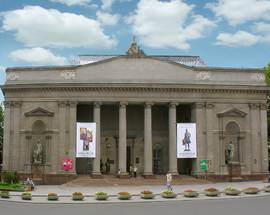 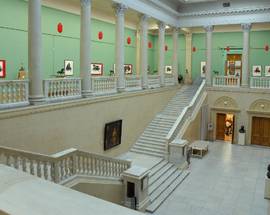 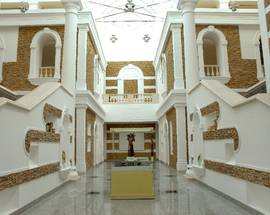 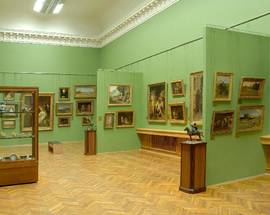 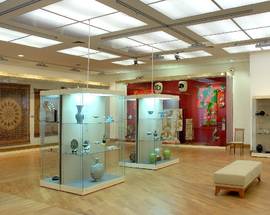 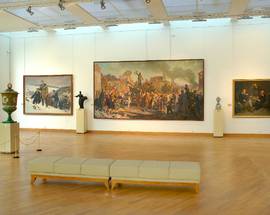 Starting from new, like the city in which is was housed, the collection was rebuilt from scratch with the notable work of the museum’s Director, Elena Aladova (1907-1986) who ran operations for 33 years from 1944 until her retirement. After the war the museum moved from home to home as the collection slowly grew. Greatly extended in 2006 and possessing over 30,000 paintings, sculptures, drawings, porcelain and other works of art in total in its contemporary collection, the museum’s current home dates from 1957 and was designed by the Belarusian architect Mikhail Baklanov (1914-1990). The museum manages to exhibit only a small fraction of its entire collection, none of it the work of a household name in the West (the absence of Marc Chagall continues to cause mild embarrassment for a few, but the museum really isn’t any worse off without him), although much of it truly outstanding all the same.
Notable among the many great works on display are several landscapes by the French painter Huber Robert (1733-1808), some truly exquisite Chinese woodcarvings and Japanese ceramics, one or two outstanding pieces by the Jewish-Belarusian artist and Chagall’s teacher Yehuda (Yuri) Pen (1854-1937) and a particular favourite, Mikhail Savitski’s (1922-2010) extraordinary painting, Partisan Madonna, dating from 1967. Even the least cultured visitor with only a passing interest in art should give the museum at least an hour. More serious connoisseurs might like to give up half a day or so to the work on display. A floor plan of the 19 halls that make up the entire exhibition can be purchased inside the museum.