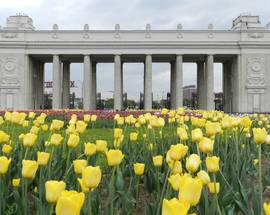 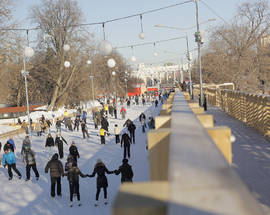 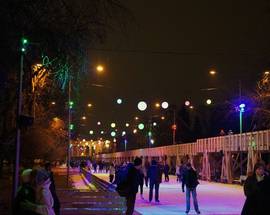 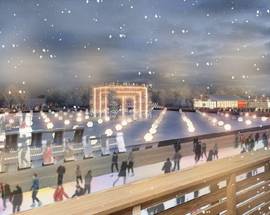 Gorky Park, also known by the somewhat unpronounceable acronym of ‘TsPKiO’, the Central Park of Culture and Leisure, has got the be the best-known park in Russia. For much of the last twenty years it has been somewhat overgrown with the hulking dinosaurs of dodgy rollercoasters and tacky Nineties paraphernalia. But 2011 spelled change for Moscow’s best loved park. It has always been a faithful mirror of its time, so its transformation last year from caterpillar to butterfly says a lot about the new Moscow that is emerging from its chrysalis.

Aristocratic Gorky Park
A scenic route to Gorky Park could start with a wander through the Neskuchny Sad, heading northwest from Leninsky Prospekt metro station into the park’s quieter, more refined half. The pavilions and ornamental bridges of Moscow’s oldest park, the Neskuchny Sad - endearingly translating as the ‘Not Boring Garden’ - tell the story of the very earliest days of this shady slice of land along the river bank. In the good old days of petticoats and Pushkin, the summer palaces of Moscow’s wealthiest nobles were dotted throughout the pristine forest of the Moskva’s sloping banks. With plenty of cash to splash, they shipped in rare plants and wildlife from around the world, grew pineapples and palm trees in orangeries, and built open air theatres where they would gather on summer evenings. Nowadays it remains a quiet haven in the city centre.

The People’s Park
Another way to enter Gorky Park is to cross the bridge from Park Kultury metro station and go through the imposing Soviet entrance gate, whose towering columns bearing hammers and sickles stand out from the leafy park like the ruins of a Greek temple. With the park’s founding in 1928, this was no longer the playground of the rich: a new Soviet vision for a communal space for all citizens to relax, play sport and enjoy exhibitions was being implemented. A few years later in 1932 the finished park was renamed in honour of Soviet writer Maxim Gorky. Slightly surreal, perhaps, for Gorky himself, who was still living at the time; but then, ‘Gorky’ was only his pseudonym, a pen name meaning ‘bitter’ to show his discontent with the quality of life of the working class, which the Gorky Park of the Thirties set out to improve. But by the arrival of perestroika, the city’s beloved green space was already changing with the times; a tangle of fairground rides and small enterprises sprung up like brambles, entrance to the park was no longer free and the park slowly fell into disarray.

The New Gorky Park
In 2011 Russia’s eye was once more drawn to Gorky Park and Sergey Kapkov was commanded to wave a magic wand over it and make the park into somewhere that would attract locals and visitors alike. And abracadabra, it worked. Gone are the cheap attractions and increasingly precarious fairground rides, in their place, a garden to rival the best of city parks in capitals around the world. In a way, Gorky Park is now a little more similar to its Soviet incarnation, with its sports facilities and exhibitions. Only this time round, it’s skateboarding, yoga, and the latest in contemporary art from the ‘Garage’ culture centre. The park is one of a kind in Moscow and in clear weather is almost always buzzing with life. On the one hand it’s achingly fashionable - watch out for park staff dressed in designer denim uniforms - yet on the other, it’s got universal appeal in its well-kept, lively and free-to-all green spaces. In winter it’s home to Europe’s biggest ice-skating rink, and one of its most atmospheric - as well as separate spaces for figure skating, dancing and ice hockey there are lit-up ice alleys meandering through the trees and along the embankments of the frozen Moskva. In its early days Gorky Park was home to the first ‘children’s railway, where children were taught to rive the trains on its short track. Nowadays children can be kept busy at the ‘Green School’, an eco-centre that runs creative workshops for little hands to get mucky painting and gardening, or looking after the rabbits and other animals that live in the park. And of course, what modern Russian venue would be complete without free WiFi?

Summer Highlights
Wondering what to do on a sunny Moscow day? Why not head over to Gorky Park and... Stargaze in the park’s summer observatory dating from the Thirties, where free lectures from the Moscow Planetarium are held. Refurbished in 2012, the observatory now has a powerful telescope and retractable roof. Entrance to the observatory costs 200 Rbl.
Go to a concert. The open air Zelyony Teatr (‘Green Theatre’) provides entertainment both in the form of big concerts – from rock, to jazz, to pop, to you-name-it – and in free music festivals which showcase independent bands from Russia and further afield.
Take part in a free workshop. Gorky’s wonderful philosophy is a brilliant antidote to how expensive Moscow can seem: in short, some things in life can be both fun and free. You could join skateboarding classes at the skate park, or yoga and salsa sessions down by the river, learn to rollerskate, run with the jogging club or take a guided cycle tour of the park. Watch out on the ‘news’ section of their website for more details of the many, many workshops that take place in the park.
Dine out under the trees with Russian pelmeni and all things dumpling-based at Pelman. From dim-sum to spinach ravioli to cheese vareniki, it’s all freshly made and a tasty way to replenish the calories lost in a hard day’s relaxing at the park. The rebranded Gorky Park is full to the brim with exciting places to eat out. Pick from takeaway stands serving soup or fresh stir fry or Georgian food and restaurants offering everything under the sun, from Mercato’s Italian pizza to 8 Oz.’s Thai/Mediterranean fusion.
Take a cruise on a Radisson yacht, which sets off from the pier in Gorky Park and makes its way along the Moskva taking in the city’s most famous sights. Relax in style with a glass of champagne and three-course meal from their on-board restaurant with an open roof deck. An optional English-language audio commentary gives insights into the rich history of the places you’ll pass, whilst the huge windows mean you can soak up the views from both indoors and outdoors. The super-modern yachts take two and a half hours to meander up and down the river and will drop you off where you got on; it can also be made from the famous Radisson Royal (Ukraina) Hotel. An adult ticket costs 950 Rbl.
Hire a skateboard – or roller blades, or a bike – and try your tricks out, sail sedately along the riverside, or zoom round the perimeter of the park. There are 10 hire stations in Gorky Park, as well as bicycle repair services if you have your own two wheels. Roller blading in particular is popular with all ages, from tiny tots to grown-up businessmen.
Have a nice cup of tea. Get refreshed at the Pueroport Samovar Bar, opposite the Buran space shuttle. Here you’ll find all the tea-based fun you ever dreamt of, more kinds of exotic tea than you can shake a stick at and of course a proper (and huge!) Russian samovar. Relax on the veranda in the evenings to the sound of a gramophone whilst enjoying a scoop of their unique tea ice creams and sorbets, which incorporate unusual natural flavours from wild elk milk to pine tree extract.
Play sports in the well-equipped, modern Sport Centre, which offers running club training, football, volleyball, handball and badminton facilities, and a range of sports and dance equipment.
Enjoy modern art at the outstanding Garage Museum of Contemporary Art, which showcases Russian contemporary art in an international perspective. It’s also a hub for creativity in the park; its educational centre runs a programme of talks, workshops and masterclasses, there’s a library on contemporary art (and an excellent bookshop!), and their café is a perfect place for quiet work. With museum and café open daily until 10pm, it’s also a good spot for sophisticated evening relaxation; their cocktail list is substantial. Adult tickets to the gallery are 400 Rbl., and the museum offers free entry every Friday night between 17:00 and 19:00.
Stroll round sculptures in Muzeon, a unique outdoor sculpture park containing over 1,000 works of art. It’s free to enter, and contains many interesting pieces, particularly Soviet, socialist and contemporary sculpture. It’s also the best place to admire Peter the Great’s colossal monument rising 98 meters high out of the river nearby.
Print Polaroid-style pictures from a Boft machine – hook your smartphone up via WiFi or Bluetooth, or print directly from your Instagram account for a lasting memory of the day.
Be adventurous on the PandaPark highropes course in the Neskuchny Sad. Make your way along a choice of three assault courses of platforms suspended in the trees twenty feet off the ground.
Watch a movie at the open air cinema and café. Showing a mix of art house and festival films as well as recent releases from the mainstream, prices start at 300Rbl, and there is the occasional free showing. Check the park website for details of what’s coming up.
Relax! Bring a picnic and a friend, hunt down a hanging chair or giant beanbag, relax on the lawn or play a spot of table tennis, grab a book from the open library, feed the ducks from the bird-food vending machine, quench your thirst at the free drinking fountains, read the paper online using the free WiFi, eat Gorky Park ice cream, watch the pointy-eared red squirrels and the evening sun reflected in the Moskva. There are few better places than Gorky Park to soak up both the summer sun and the buzzing city atmosphere.
Parks

Ul. Krymsky Val 9
/moscow/gorky-park_39166v
The immortal Gorky Park has had a complete makeover in 2011 and gone are the garish rides and rollercoasters as the park has gone back to being a wholesome …
see more