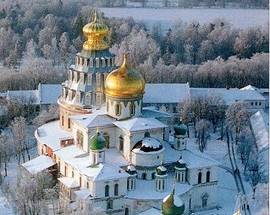 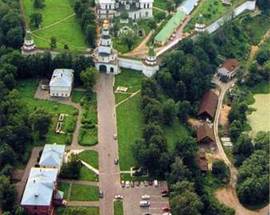 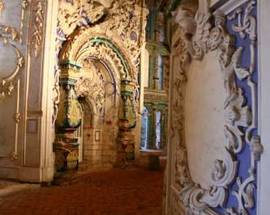 Although this huge monastery is currently undergoing complete reconstruction, it is still certainly worth a visit if you are interested in some Russian Orthodox sightseeing that is a little out of the ordinary. Founded in 1656 by the divisive Patriarch Nikon, the huge monastery is visible from miles around and its unique architecture and imposing size leaves no doubts as to why Patriarch Nikon eventually fell out of favour with the ruling Tsars.

Born the son of a Moravian peasant, Nikon’s steady rise to power was astonishing and it was thanks to his very close friendship with the impressionable Tsar Alexei I that he was granted the power to become a great reformer of the Russian church. His success and controversial reforms also ultimately contributed to his downfall as members of the court convinced the Tsar that Nikon was too powerful and that he wished to usurp the Tsar. In 1666 Nikon was exiled to a distant monastery, but the grand residence which he built for himself (New Jerusalem) remained a working monastery up until 1918.

The site for the monastery was chosen as it was believed its location resembled the Holy Land. The river Istra was renamed the new Jordan river and the unusual huge conical roof of the Cathedral of the Resurrection, covered in gold and windows, was intended to resemble a cathedral by the same name in Jerusalem. Nikon invited foreign monks to live here to represent the multinational nature of the city of Jerusalem and beyond that the ‘Kingdom of God’.

The decoration of the Cathedral and its surrounding churches is decidedly contemporary for the era. Baroque stone reliefs and ceramic tiles, as opposed to wooden icons and stucco, cover the main cathedral whose restoration can be observed from various viewing points. The restored small chapel of John the Baptist has a ceramic iconostasis and houses Nikon’s tomb and is one of many small restored chapels whose domes peek up above the ground around the soaring roof of the main cathedral.

In the far end of the monastery, the New Jerusalem museum and sacristy houses various icons and religious paraphernalia as well as numerous paintings and models showing how the church was before it was all but destroyed by the Nazis during World War II. Behind the museum are some steep steps leading out through the monastery walls and into the meadows which have been christened (what else?) "the New Garden of Gethsemane".

Looking down the steps to your right is the new river Jordan. Nikon’s colourful hermitage sits next to the spot where people still baptise themselves in the river. Straight ahead thought the trees and wild meadows is an old izba which is a museum of local folk traditions and beyond that is a windmill. If you keep walking out towards the road and follow it along to your right for about 1.5 kilometres you will reach the local Novy Jerusalim train station.

GETTING THERE: Local trains to Istra leave almost every hour from the local train terminal at the far end of Rizhsky train station (metro Rizhskaya). The journey takes around one hour and 20 minutes. Once in Istra you will need to take a five minute taxi to New Jerusalem. A great meal at bargain prices can be had at the antique shop themed cafe and restaurant Davidov on ul. 15 Let Komsomola, which is 10 minutes walk straight up the road from the train station.

Admission to the monastery is free.