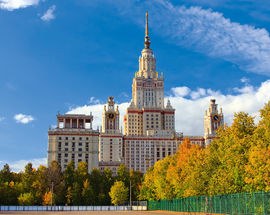 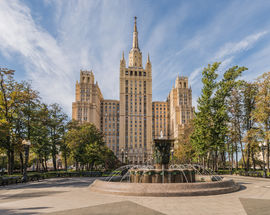 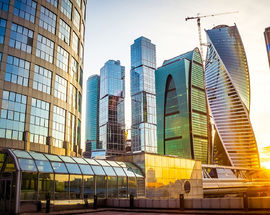 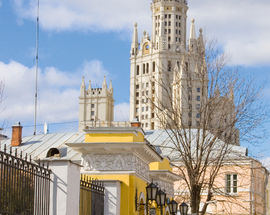 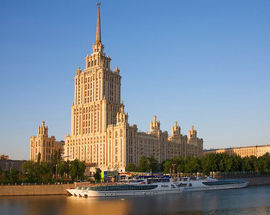 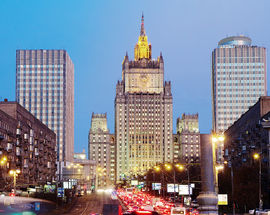 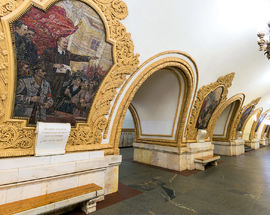 One of the most distinct features of the Moscow skyline, Stalin's so-called ‘Seven Sisters’ are still amongst some of the tallest buildings in Europe.

Poor old Stalin. After the defeat of the Nazis in 1945, legend has it he was convinced that everyone in the world would now want to visit Moscow. But Uncle Joe had a little problem. Disregarding the city’s dearth of cheap hotels and non-Cyrillic signage, the great leader had a rather Freudian complex about his capital’s lack of tall buildings. “What if they come to Moscow and don’t see any skyscrapers?” he is reported to have complained.
The results of all this angst are known by some as the ‘Seven Sisters’, but most Moscovites rather more prosaically refer to them as the Vysotniye Zdaniye - the tall buildings. Despite huge demands for housing and infrastructure following the war, early fifties Moscow devoted the bear’s share of its energy to creating these buildings. Being great propaganda magicians, the Soviet leaders used the flurry of construction energy to show the world that, from the ashes of war, the Soviet capital was renewing itself not only better than before, but doing it better than everyone else. The Sisters went on to become the dominant feature of Moscow’s post-war skyline and, in defiance of the growing competition from the current building boom; they remain the definitive architectural statement of the city’s contemporary identity.

Whatever Stalin may or may not have said about tourists and skyscrapers, plans for a Moscow makeover were in fact already afoot as early as 1931. That year, the Communist Party approved a number of mega building projects including the reconstruction of Moscow and the Moscow Metro. The next year, when Stalin created the Union of Soviet architects was created, he gave them their mission. More than simply emulating the skyscrapers of America, he wanted to exceed them by creating his own versions - Moscow versions. The first project, a clear forerunner of the Sisters, was the ill-fated Palace of the Soviets, approved in 1933. Though never built, this 415m-high monster set the tone of grandiose classicism that dominated the post-war period.
For first-time arrivals to Moscow, these mammoth creations certainly make a memorable impression. Emerging from Leningradsky Station off an early Petersburg train into a pre-dawn neon haze, you immediately behold the Hotel Leningradskaya, one of the smallest of the Sisters, completed in 1954 and now part of the Hilton hotels chain. All in all there were eight such buildings planned; two hotels, two government buildings, two housing apartments and the University. The eighth, the Zarayadye, was to have adorned Red Square but, mired in delay, was eventually abandoned.
Trademarks of the Stalinist style of architecture embodied in these buildings are the obvious wedding cake structure that pulls the eye toward the central, massive spire, and the patriotic decorations and mouldings. Critics generally agree that the Stalinist period dates from the 1933 Palace of the Soviets competition to 1955 when Khrushchev disbanded the Architects Union. Super-buildings for a super people, the buildings also utilised new building techniques of building with steel frames with concrete walls upon a concrete slab, which allowed for their massive size.

The looming edifice of the Moscow State University (MGU) was the first of the Seven Sisters to begin construction and was finished second in 1952. In total more than 400 architects worked on the project, submitting countless plans and designs which in turn amounted to a great advertisement for communal process back then. With a height of 235.7m, this squat giant is topped by a 12 tonne star and its massive dimensions ensure that a walk around the perimeter lasts for 3 km. MGU was built using the labour of gulag prisoners and German POWs, some of whom were even housed on an upper floor when not involved in building work. One Daedalus is even supposed to have tried to escape by strapping wooden wings to his arms and springing off the side of the building in an attempt to fly away.

Historically the hotels have weathered the last half-century best. The Hilton Moscow Leningradskaya Hotel (formerly Hotel Leningradskaya) underwent a complete renovation in the mid-2000s to become quite the palatial masterpiece. Rightly treating it as a museum piece, the hotel’s restoration has seen much of the original fittings retained - note the long bronze chandelier suspended in one of the corner stairways, and the copies of the gates of the Verkhospassky Cathedral in the Kremlin. The bomb shelter did not receive such historical respect, though, and was transformed into a luxury swimming pool.
Restoration of the 29 storey, 1,000 room Radisson Royal Hotel Moscow (formerly Hotel Ukraina) was completed in 2010, transforming the building into a 5 star luxury hotel with Rolls Royce for sale in the lobby. Described as a seedy hotel in the Soviet days yet also awe-inspiring and historical, during the process of renovation, close attention was paid to the building’s original period details. A vast collection of Soviet realist art is proudly displayed as well as a huge diaroma (a miniature version of the city) showing how Moscow looked in the 1970s.

Fitting with the grandeur of the Kotelnicheskaya Embankment Buildings, both apartment blocks were destined to have only elite tenants. Reserved for the best of the best, Kotelnicheskaya was home to sculptors, painters and artists as well as senior officials; for example Russian ballet dancer Galina Ulanova, poet Andrey Voznesensky, a national folk singer of Russia Lyudmila Zykina and writer Konstantin Paustovsky used to live there.
The scientific elite, astronauts and pilots filled up the apartments at Kudrinskaya Square. Without one common owner, these buildings have suffered the most in the post-Soviet period due to unregulated privatisation and lack of central administration.
The building on Kotelnicheskaya Embankment seems to be have been abandoned by the city authorities. Reports in the Russian media reveal long-standing disputes over the building’s administration or lack thereof. Literally rotting from the inside, this 32 story monstrosity is a mini-city with 700 apartments, a cinema and a beautiful park inside. With today’s mix of owners, new owners have been buying parts of the building and embarking on renovation schemes, which involve demolishing the walls, and removing the foundations.
Whether they are worthy for restoration or enormous monstrosities that only serve to remind the people of the Soviet era already past, these buildings cast an impressive shadow. They capture the past and the present together and stand as witnesses to the last fifty years. Their immense appearance speaks of both faded glamour and of resurrection.

The foundations for this skyscraper were laid down in 1947 and completed in 1953. The construction of the tower was complicated by its location near the Moscow Metro tunnels and the Krasnye Vorota station. Dushkin built a second entrance to the station into the ground floor of the tower, which opened on 31 July 1954.
After being the headquarters of the Ministry of Construction of Heavy Industry the administrative part of the skyscraper also hosted the Ministry of Transport Construction. The building is also known as Lermontov Tower from Mikhail Lermontov and the Lermontovskaya Square, the name assigned to the Red Gate square between 1962 and 1986. Interestingly, the building was never intended to be completely straight; it stood literally on the edge of a pit, so the engineers decided to build the skyscraper at a slight angle to ensure the soil does not sink over time. It is difficult to see with the naked eye, but it stands at an angle just shy of 90 degrees.
The main tower has 24 levels and is 133 metres (436 ft) tall. The building also incorporates two 11-story apartment blocks, designed by the same architect. Both the right and the left wing contain around 300 flats.

This skyscraper was laid down in 1948 and completed in 1953. According to the biography of the architect Minkus (published in 1982), draft plans were first drawn up in 1946 and ranged from 9 to 40 stories. In 1947 two designs were proposed: one featured a layered structure, while the other called for a more streamlined construction which culminated into a blunt rectangular top.
This building is very restrained in decor compared to the other sisters. Built between the years 1948-1953, it is currently the home of the Ministry of Foreign Affairs. The original design of the building did not have a spire, but the powers that were insisted the design be brought in line with the spirit of the times. It is said that once, passing by the skyscraper, Stalin stopped to examine it more closely. He expressed his strong dissatisfaction over the obvious Americanism of its design. It was immediately decided that a spire would be added to the completed structure, so that its silhouette matched that of the other six sisters.

The residential apartment building Triumphal Palace, near Sokol metro station was completed in 2005 with a height of 264 metres. Although it’s one of the new generation of Moscow’s skyscrapers it takes its inspiration from the seven sisters and is said to be the tallest residential building in
Europe. Recent years have seen the intense development of the Moscow skyline in particular as the various towers of the ‘Moscow City’ international business centre have reached completion. Moscow City now boasts Europe’s tallest building the Russia Tower (612.2m), Mercury City (532m) and the Federation Tower (506m) as well as the city’s largest shopping centre Afimall.

Moscow’s famous underground system is not only a useful way to get around the city, it’s also a tourist attraction in its own right. Begun in 1935, it has been growing in size ever since and now has 14 lines with 222 stations, making it the seventh longest in the world. The most spectacular stations are those built in the Soviet period - particularly during Stalin’s reign when the dictator envisaged the underground system as ‘Palaces for the People’. It was one of the USSR’s most ambitious architectural projects. The metro’s artists and architects worked to design a structure that embodied svet (radiance or brilliance) and svetloe budushchee (a radiant future). With their reflective marble walls, high ceilings and grand chandeliers, many Moscow Metro stations have been likened to an “artificial underground sun”. This palatial underground environment reminded riders that their tax rubles had been spent well. All of the stations along the circle line are worth checking out for those famous chandeliers, mosaics, stained glass and big marble entranceways. The stations of Mayakovskaya and Ploshchad Revolutsii are also considered to be masterpieces of 1930s construction and are conveniently located in the city centre.
Tours around Moscow

Kutuzovsky pr. 2/1 bldg. 1
/moscow/radisson-collection-hotel-moscow_69144v
An absolutely monumental hotel, which with its 51 rooms and 31 floors, is easily the biggest luxury hotel in Moscow. The lobby takes in not only the reception, …
see more