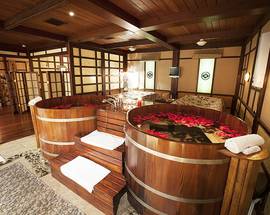 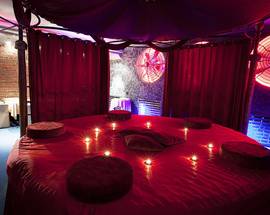 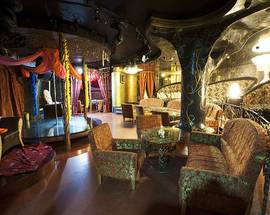 If you’re looking for an upscale strip bar that lives up to Moscow’s reputation, you can head to Rasputin, which is named after the famous womanizing monk. Just about everything here breathes ‘spend, spend, spend’. And you just might want to with all this beauty around. In addition to several private rooms (jacuzzi and sauna included) Rasputin’s shows are notably better than average. They could almost be staged in the Bolshoi (if not for the lack of clothes). The club also boasts a fine restaurant. Read the menu carefully, it holds a number of surprises…18+.

15.01.2015
George
Moscow
The most titled Russian strip club. Daily work of 120 girls. The leisure complex Rasputin has a spa, exotic bath, live hall, hard&#045;hall, strip lounge, restaurant and karaoke. The complex area of 3,000 square meters. This premium club for wealthy gentlemen.
19.12.2014
Serge Luriens
Berlin
Often go to Moscow. Really like strip club Rasputin. Chic Russian girls who speak English. Very hot and active. Beautiful Russian cuisine, especially like fish. By the way, the restaurant is open around the clock, and a strip club from 20.00 pm to 06.00 am. I was taken on a tour of the club and showed excellent spa complex, but there I was not yet.
04.06.2014
J
Che
Completely avoid. They try to rip you off in every way possible including putting drinks and dances on your tab then saying they will call the police if you don&#39;t pay. Girls were also cold and disinterested. Just swaying back and forth is not worth 500 rubles.
27.06.2011
Mostafa