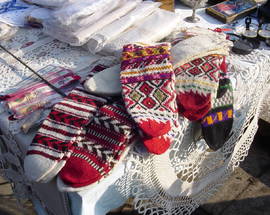 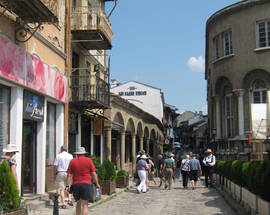 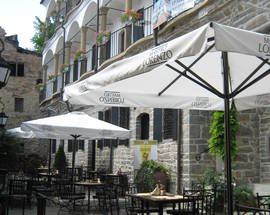 Bulgaria's old capital and the site of great historical battles occupies a dramatic hillside location with the Yantra river winding through it. The whole town is postcard pretty in any season, though spring and autumn are the best for sightseeing as Tarnovo is also one of the country's hottest places in the summer and one of the coldest in winter.

The relatively well preserved mediaeval Tsarevets fortress is the most visited historical site in the country. There is much more to see in Veliko Tarnovo than Tsarevets, however, and those tourists who only swing by in their air-conditioned coaches to tick off this box are missing the laid-back atmosphere of this lovely town.

Be prepared to give your feet a good bashing and wear sensible shoes as you explore the cobbled alleys and marvel at the houses built into the rocks overhanging the river. Be forewarned that there are little, if no, facilities for the disabled.

The city has been inhabited since the 3rd millenium B.C., remains having been found on the now overgrown Trapezitsa hill. Thracian tribes lived on Tsarevets hill in the Bronze and Iron ages but the Romans preferred nearby Nicopolis ad Istrum with its hot springs. The town's golden age came with the declaration of independence from the Byzantine empire in 1185 by the local Boliar (an aristocratic title) brothers Ivan Assen and Peter in Veliko Tarnovo. They subsequently conducted a two-year battle with the empire to secure Bulgaria's freedom and in 1187 the Second Bulgarian Kingdom was born, with its capital Turnovgrad (Veliko Tarnovo), and the brothers became Tsars. They are referred to as the 'Assens', together with a third brother, Kaloyan, who took over after their deaths. The fourth 'Assen' is Ivan Assen II, the son of Ivan Assen, who ruled from 1218 to 1241 and brought the Kingdom to new heights, conquering neighbouring lands that gave it access not only to the Black Sea but also to the Aegean and Adriatic seas. at the centre of political life. As the new capital city it was the place where the first Bulgarian constitution was written, the first 'Great' National Assembly took place and Prince Alexander Battenberg was elected  head of state. It ceded its title of capital to Sofia in 1879.

The name Tarnovo (often written Turnovo) is believed to come from the Slavic word 'trun', meaning thorn, though other theories link it to the roman word for fortress. The word 'Veliko', meaning ‘great’, was officially only added in 1966.

Ivaylovgrad: Discover the Thracian Culinary Heritage feature
Caring for your pets in Sofia Expat
Holidays and Traditions Spring feature
see more
This site uses cookies. By continuing to browse the site, you are agreeing to our use of cookies. Find out more here. AGREE
Countries
Top