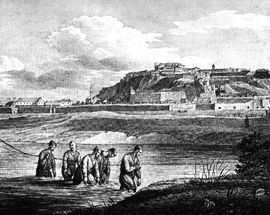 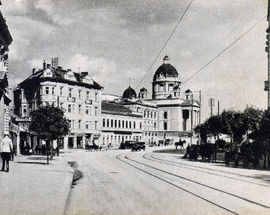 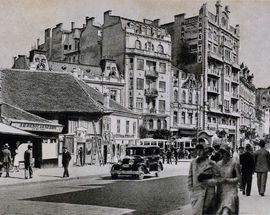 279 BC First mention of Singidunum, the original name of the city. Founded by the Scordisci, a Celtic tribe.

395 The Roman Empire splits into two and Singidunum becomes a part of the Eastern Roman Empire. Strategically located on the northwestern border, it is exposed to diverse cultural influences and is a magnet for every aspiring conqueror.

878 First mention of the Slavic name of the city - Belgrade. Pope John VIII writes a letter to Bulgarian Prince Boris I Mihail, informing him about the dismissal of Bishop of Belgrade for debauchery.

896-1232 Belgrade is a battleground between rivals - Hungary and the Byzantine Empire, it changes hands eight times. Once seized by Bulgaria and twice ransacked by Crusaders on their way to Jerusalem.

1166 Creating an independent Serbian state, Stefan Nemanja asserts himself as the Grand Prince of Serbs. He’s also a founder of the Nemanjić dynasty and crowned King of the Serbs by the Pope. 1219 Serbian Orthodox Church gains independence.

1284 King Stefan Dragutin receives Belgrade from Hungary as a gift - this is the first time that the city passes to Serbian rule.

1346 King Stefan Dušan of the Nemanjić house is crowned Emperor of Serbs and Greeks. Following his demise, the empire dissolves and Serbian noblemen create their own states.

1389 Battle of Kosovo. Prince Lazar Hrebeljanović rallies Serbian noblemen to stand up against Turkish expansion into Europe. Europe celebrates the victory of Christianity because of the death of the Turkish sultan and the Turkish retreat. On the other hand Serbia cannot recover from the defeat as most of its nobility, including Prince Lazar, perish in the battle. He is succeeded by his underage son Stefan Lazarević, who becomes a Turkish vassal.

1403 Despot Stefan Lazarević receives Belgrade from Hungary, rebuilds it and makes it the capital of Serbia.

1456 Sultan Mehmed II besieges Belgrade with 150,000 soldiers.TheTurks lift the siege when their Sultan is wounded.

1459 The Turks conquer the Serbian capital of Smederevo; which marks the beginning of a five- century long Turkish domination over Serbia.

1521 Sultan Suleiman the Magnificent captures Belgrade with 300,000 soldiers, and deports the entire population to Istanbul.

1804 Serbian uprising against the Turks started by Đorđe Petrović Karađorđe.

1807 Led by Karađorđe, Serbs liberate Belgrade and make it the capital of Serbia. Karađorđe is subsequently proclaimed a hereditary ruler. He founds the Karađorđević dynasty. 1813 The Turks occupy Belgrade; the uprising is crushed; Karađorđe flees Serbia.

1862 The murder of a Serbian boy triggers a clash between Serbian and Turkish soldiers which ends in an international treaty bringing the Turkish control over Belgrade to an end.

1867 The Turks withdraw from Belgrade. The Turkish commander hands over the keys to Belgrade Fortress to Prince Mihailo Obrenović.

1878 Formal independence of Serbia recognized at the Congress of Berlin.

1903 The May Coup d’Etat. A group o f army officers assassinate King Aleksandar Obrenović and Queen Draga Mašin, because their marriage is unacceptable to the pub- lic. The house of Obrenović becomes extinct and King Petar I Karađorđević (grandson to Karađorđe) claims the throne. 1912 First Balkan War pits the Balkan League (Serbia, Greece, Montenegro and Bulgaria) against the Ottoman Empire. The Turks are driven out of Kosovo and Metohija, the last occupied part of Serbia.

1913 Second Balkan War waged and won by Serbia against Bulgaria.

1914 Outbreak of World War I. Austro-Hungary shells and captures Belgrade. After the Battle of Cer and Kolubara, the first allied victories in WWI, the Serbian army liberates Belgrade and drives the Austro-Hungarian army out of Serbia.

1915 Germany and Bulgaria enter the war siding with Austro-Hungary. German and Austro-Hungarian troops occupy Belgrade. This is the beginning of a three-year- long occupation and plunder of the city. The Serbian army retreats under attack across Albania towards Greece and Corfu Island.

1934 King Aleksandar visits Marseille in a bid to strength- en a defence union with France against Germany. During this visit he’s assassinated by Croatian Ustashe.

1944 Belgrade is repeatedly bombed by the Allies. Tito’s Partisans and the Red Army liberate the city on 20th October.

1945 The human cost of war is 1,700,000 deaths, chiefly among Serbs. The monarchy is abolished, the Federal People’s Republic of Yugoslavia is proclaimed and Josip Broz Tito comes to power. In the post-war period, Belgrade grows rapidly and develops into an important centre of political, cultural and sporting life. Crown Prince Aleksandar, son to King Peter II, is born in Claridges Hotel in London.

1961 The first Conference of Non-Aligned Countries is held in Belgrade.

1968 Student protests are held against social inequities and bureaucracy. Soon after, hundreds of thousands of Belgraders in Nikola Pašić Square protest against the So- viet occupation of Czechoslovakia.

1980 Josip Broz Tito dies. Yugoslavia is now governed by a ‘Presidency’ comprised of 8 members (6 from the republics and 2 from the Serbian provinces).

1991 Ethnic and political divisions lead to the collapse of Yugoslavia. Slovenia and Croatia declare independence, and, as a consequence, civil war erupts. Crown Prince Aleksandar II visits Belgrade for the first time in his life.

1994 End of hyperinflation, new dinar introduced. 1995 In the aftermath of the Croatian war, around 300,000 Serb refugees leave Croatia for Serbia.

1999 Long-lasting aspirations of Kosovo Albanians to secede from Serbia escalate in violent conflicts between Serbs and Albanians in Kosovo. NATO forces bomb Serbia and Belgrade for three months, without the endorsement of the UN Security Council. Slobodan Milošević is accused of crimes against humanity during the wars of Yugoslavian succession. In June, following a piece agreement, NATO troops are stationed in Kosovo and Metohija. Around 200,000 Kosovo Serbs find refuge in Serbia.

2000 Slobodan Milošević is ousted amid huge protests over electoral fraud. Relations with European countries and the US improve.

2003 Federal Republic of Yugoslavia is replaced by the State Union of Serbia and Montenegro. Serbian Prime Minister, Zoran Đinđić, is assassinated by a criminal clan.

2004 Before the eyes of NATO and UN forces, around 50,000 Albanians launch orchestrated attacks on the remaining Serbian villages in Kosovo and torch Serbian houses. In less than 48 hours, Albanians desecrate and destroy 30 Serbian churches and monasteries.

2006 The State Union of Serbia and Montenegro ceases to exist. Serbia is again an independent state. Belgrade is named City of the Future of South Europe by the Financial Times.

2007 Negotiations between Serbia and Kosovo Albanians over the status of Kosovo are held. Serbia offers broad autonomy, Albanians desire nothing less than in- dependence. The international community is divided over this issue.

2008 With the support of the USA and some EU countries, Albanians from Kosovo and the Metohija province of Serbia declare their independence. The international community is still divided over this issue - some countries have recognised Kosovo independence, some are against it. The Serbian leadership does not want an armed conflict and strives to prevent the secession of its province through diplomatic and political means. Massive protests are staged throughout Serbia. Around 500,000 people gather in Belgrade in peaceful demonstrations and prayer against Kosovan independence, while several hundred hooligans demolish and burn the empty US Embassy building.