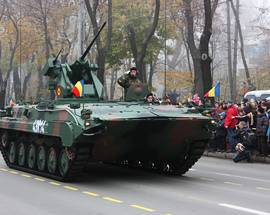 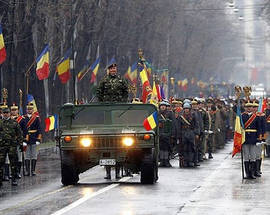 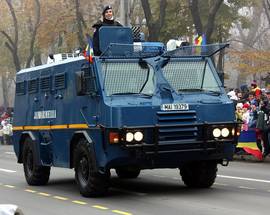 It is celebrated in Bucharest with a somewhat pompous, Cold War-style military parade through the capital that starts up at Casa Scanteii around 11:00 and usually circles around the Arc de Triumf.

The best viewing spots are along Soseaua Kiseleff, but arrive early as crowds can be big. Also worth noting is that there is usually a dress rehearsal the last Saturday before the day itself: if you really want to see grown men and women playing at soldiers that could well be the best time to do so.

A parallel event takes place in Alba Iulia, where the Marea Unire actually took place, for what December 1st celebrates is the day in 1918 that the representatives of the Romanian population of Transylvania (which had been part of Hungary or the Hapsburg Empire for centuries) voted to unite with the Principalities of Romania (Moldavia and Wallachia).

Moldavia and Wallachia had in turn had their own unire on January 24, 1859. January 24 is also a national holiday. A major ceremony takes place in the northeastern Romanian city of Iaşi.

The Marea Unire provokes fierce debate to this day. Though Romania’s hegemony over Transylvania is not now questioned by anyone except the most fervent Hungarian nationalists, the manner in which the Hungarian minority of the region has often been treated (either persecuted or favoured, depending on your point of view) and its ongoing right to self-determination, are valid political topics even today.

The moderate Hungarian nationalist party, the UDMR, advocates partial autonomy for those areas of Transylvania in which Hungarians form overwhelming majorities (an area known as the Skekelyfold). All other major Romanian political parties reject the idea.

Romania tried desperately to remain neutral at the outbreak of World War I, and until 1916 it succeeded. By then, however, neutral or not, much of Romania had been occupied by the Axis Powers, and King Ferdinand, who was married to the English Queen Marie and who had succeeded his uncle Carol I in 1914, committed his country to the war, on the side of the Allies, seizing what he saw as an outstanding opportunity to wrest Transylvania from the disintegrating Hapsburg Empire.

The war was initially disastrous. German troops occupied Bucharest and the King and his government had to flee to Iaşi. By March 1918, with no breakthrough in the war on the western front in sight, Romania was forced to negotiate a humiliating peace with Germany. It was only the collapse of the Axis Powers in September 1918 that allowed Romania to re-enter the war and reclaim territory.

In Transylvania, the national movement, which had 60 years earlier fought alongside Hungarian revolutionaries in the 1848-9 uprising against the Hapsburgs, now advocated unification with Romania and garnered wide public support. The Kingdom of Hungary tried to negotiate a federative arrangement, based on the Swiss model, with Transylvania remaining part of Hungary, but the Romanians, led by Vasile Goldiş, a scholar and leader of the Romanian National Party in Transylvania, refused any compromise. On December 1 the Romanian National Party organized a meeting, at Alba Iulia, of Romanian representatives from all over Transylvania. More than 1200 delegates attended. They voted unanimously for independence from Hungary, and unification with Romania.

The union was approved at the Treaty of Versailles the following year, but was not formally legalized until the Treaty of Trianon in 1920.

From 1882, when the notion was first introduced, Romania had always simply celebrated its National Holiday on the birthday of the ruling monarch. From 1945 until 1989, August 23 (the day in 1944 Romania had switched sides, from the Axis to the Allied, in World War II) did the honours. Though the palace coup of that day which saw the removal of Ion Antonescu’s fascist regime was much work of the young King Mihai and his advisors, Romania’s communist government subsequently rewrote history to give themselves a leading role in events.

Always celebrated with great fast, with military parades and gymnastic displays, from the 1970s onwards August 23 became synonymous with the kitsch ‘mass games’ for which Nicolae Ceausescu had such a weakness.

When Ceausescu was killed in 1989, one of the first acts of the new government was to declare December 1 the National Holiday. Bar the odd newspaper article remembering how it used to be, August 23 is a day which now goes largely unnoticed.