share post a comment
If Transfagarasan Highway is called the most spectacular road in the world (according to an appearance on BBC Top Gear in 2009), Trasalpina Highway is the highest road in Romania, and lovers of thrills and engines call it the most dangerous road.

Being closed during the winter, Trasalpina connects the towns of Novaci in Gorj County and Sebes in Alba County, having the highest point in Urdele Pass, at 2145 m. Transalpina crosses four cities - Gorj, Valcea, Sibiu, Alba - crossing the Parang Mountains from south to north, the highest altitude being on a portion of about 20 km, in Vâlcea County, where it presents itself as a "ridge road", passing a short distance from the peaks of Dengheru (2,084 m), Păpușa (2,136 m), Urdele (2,228 m), Iezer (2,157 m) and Muntinu (2,062 m). 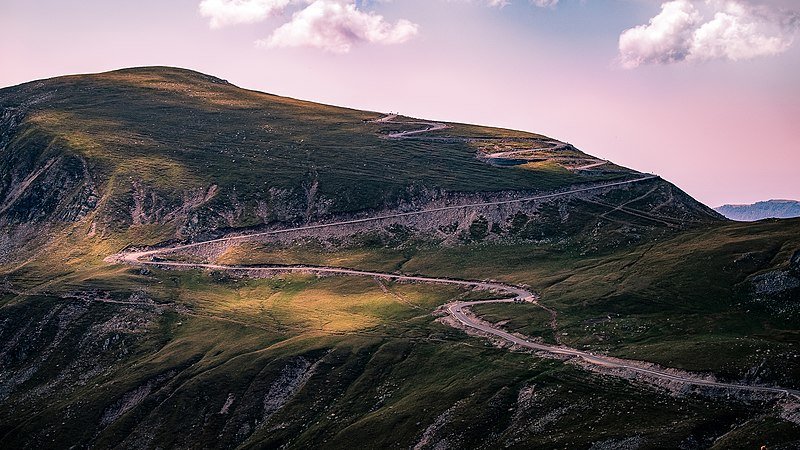 
The beginnings of this path are unclear. Some sources claim that it was first built by the Roman legions during the wars with the Dacians, which is why it is listed on the history maps as the "Roman strategic corridor IV".
What is certain is that this route, known as the "Devil's Path", was originally a mountain path, used by shepherds from the Border of Sibiu to cross the mountains with sheep herds in Wallachia. Given the lessons of the First World War, King Charles II wanted to have at his disposal a strategic road for mountain artillery, pulled by horses, which could be traveled by troops moving between Wallachia and Transylvania. The restoration works decided by the king took place between 1934-1939. King Carol II also attended the inauguration of the road in 1939, accompanied by the future King Michael I, as well as Prime Minister Gheorghe Tatarescu. They traveled the entire route of the road in an off-road vehicle, with King Charles II at the wheel.  After the inauguration, the road was known as the Royal Road or the King's Road, which replaced the popular name of the Devil's Path.

The last rehabilitation of the road took place in 2013, but it was not completed, so the section between Voineasa and Obarsia Lotrului is officially declared a construction site, being allowed to travel only between 7-20 hours, and the maximum speed is 30 km / hour.

How to get there


To get to the Transalpina from Bucharest, the best way is to take the A1 motorway to the industrial town of Pitesti (best known as being the place where Dacia cars are made), after which you will go to Ramnicu Valcea, Horezu, Novaci, Ranca .

Although Transalpina, in itself, is a great tourist attraction, Ranca is one of the most beautiful ski resorts in the country. It has three ski slopes all equipped with ski lifts; one for beginners positioned on Cornestul  Mount and equipped with night instalation positioned in the center of the resort, and one for advanced who continues over the top. The third is a babyski positioned at the entrance to the resort equipped with a night instalation. The authorities are currently working on the 4th part. Ranca also has a chairlift that serves three ski slopes located at the foot of Papusa Peak. The ski season begins in November and ends in May.

At Ranca and in the areas around the resort, the air currents favor paragliding. Papusa Peak, Magura Peak, Cerbul Peak are just some of the locations used by paragliding enthusiasts.

Above Sugag is the Oasa Dam, an artificial accumulation lake made on the river Sebes located at an altitude of 1,255 meters.

Oașa Dam covers an impressive area of ​​440 hectares, being one of the largest reservoirs in the country, inaugurated in 1979. On the horizon, beyond Lake Oașa you can see in good weather the Four Peak. At Oașa you can fish, the fish that predominates in the lake being trout, clean and boistean. At a difference of 200 meters altitude from the dam, travelers prepared for a short hike can reach one of the quietest, most secluded and picturesque monasteries in this area of ​​the country. The Oașa Monastery is located at a distance of 40 kilometers from the nearest commune, thus becoming an oasis of peace both for the monks who serve here and for the tourists who make the trip to visit it. The monastery complex from Oașa is located on a plateau in Valea Frumoasei, surrounded by coniferous forests and having a beautiful view of the accumulation lake and the nearby peaks. In winter, access is very difficult.


A resort much less populated than Ranca, a place where little seems to have changed since the time when King Carol crossed the road to heaven, Obârşia Lotrului is the kind of place that, revisited over decades, brings a sweet nostalgia and the certainty that some places remain the same, guarded by the passage of time. At Obârşia Lotrului there are not as many tourist facilities as in other mountain resorts, and the lovers of the place appreciate this aspect. Instead, the traveler ready to venture into the heart of the picturesque nature of the Parang Mountains will encounter hikes of rare beauty, fresh air and a lot of peace.

Also from Transalpina, starting from Novaci, you can visit the Gâlcescu​​​​​​​ glacial lake, declared a natural monument and surrounded by a natural, geological and floristic reservation. The glacial lake is so clear, that the trout it is populated with can be seen with the naked eye, and due to the fact that it is at the end of a fairly long hike that passes over the Papusa peak, the area is very little crowded.