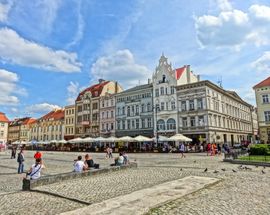 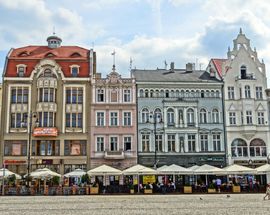 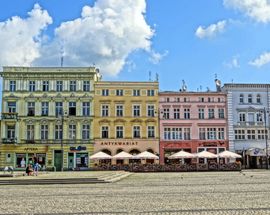 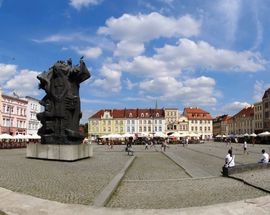 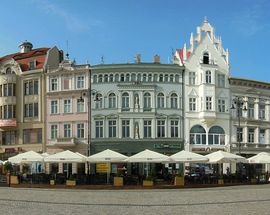 The historical centre of town, Stary Rynek and the surrounding streets constituted their own island until the 18th century, when the moat to the south and east (fed by the Brda River) was filled in by the Prussians. The town square was first demarcated in 1346 by King Kazimierz the Great, and soon a wooden Town Hall was built at its centre; this burned down in a huge city fire in 1425 and was replaced by a stone building, which unfortunately turned out to be just as impermanent, burning down in another fire in 1511. The next iteration was to be more lucky: it lasted from 1515 until the 1830s, though it did fall into ruin during the Swedish Deluge (1655–1660) and a subsequent fire (yes, those used to happen very often). Its inevitable demise came not from flames, but from the hands of the Prussians - a fate shared with the city’s castle ruins, city walls, and the coin mint that once stood on Mill Island. In 2010, the foundations of the Town Hall were found underneath the surface of the Rynek and long-term excavations were finally wrapped up in mid-2019!

The main monument now residing on the main square is the 1969 Bydgoszcz Battle and Martyrdom Monument, a memorial to the horrors of Nazi occupation and Stalinism. For something more light-hearted, search for the ‘Children Playing with a Goose’ fountain in the southeast corner, a 1909 work by Karol Kowalczewski. And to be completely weirded out, take up a spot in front of house no. 17 at 13:13 or 21:13, which is when legendary Polish sorcerer Pan Twardowski (who supposedly sold his soul to the devil in exchange for magical powers) makes a jerky appearance in the little window at the top. This strange animatronic display, created by sculptor Jerzy Kędziora (also responsible for the Crossing the River sculpture) and a couple engineers, is meant to commemorate Twardowski’s three-month stay in Bydgoszcz in 1560. Also of note - you’ll find the Tourist Info Point at the corner of ul. Batorego.

Top Things to Do in Bydgoszcz feature
Letnie Brzmienia | The Sounds of the Summer Arts & Culture
Polish Food: 13 Dishes You Must Try feature
see more