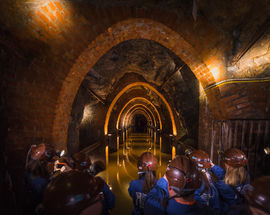 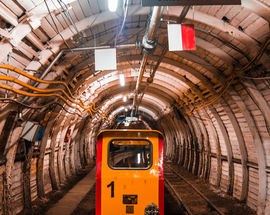 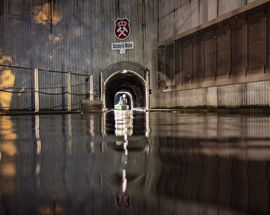 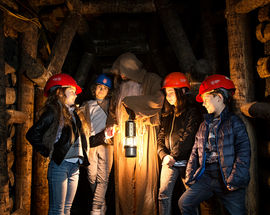 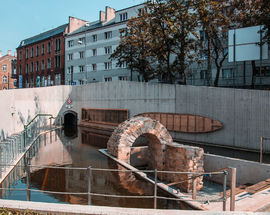 The Queen Louise (Królowa Luiza) Mine opened for business in 1791, one year after Salomon Izaak first discovered coal below the ground. One of the oldest mines in the region, and biggest revitalised post-mining cultural heritage site in Europe, it has received numerous awards from the Best Tourist Product 2018 (Polish Tourism Organisation), Tourist facility of the year 2019 (Polish Chamber of Tourism) and the European Heritage Award/Europa Nostra Award 2019 awarded by the European Commission. Wow.

Your visit starts off at ground level where you’ll find chunky pieces of machinery, pistons, dials, pipes, photo displays and other industrial detritus clustered around the old ‘Karnell’ shaft. Pride of place goes to a steam-powered hoist that made its debut in 1915 to a design born in Duelmen, Germany; such was the quality of the workmanship that it continued to be used until 1990. Every bit as impressive is the 30 metre hoist next to it; open to visitors, sweeping views of the city can be had from the top. Other points of interest include machinery salvaged from now-defunct mines, an underground machine park, and a monument honouring miners from 1850.

The underground sections are split into three levels for visitors, the first of which is a boat trip along an underground river spanning 1130m, while a guide explains the history and culture of the mine. At the 2nd level, 40m below ground, you are shown the technologies used for mining over the last 200 years, right up to the huge machinery of the 21st century. The third and final level is family orientated, specifically for kids, with multimedia elements teaching the history of the mine and the people who worked there.

Tours in English are available for an additional cost of 150-250zł, but you must book in advance via their website or by phone.

ul. 3 Maja 93, Zabrze (Centrum Południe)
EDITOR'S PICK
/katowice/guido-mineshaft_117544v
Constructed in 1855, a visit to Zabrze’s Guido Coal Mine allows hard-hatted adventurers to plunge an initial 170m below ground, via a rattling cage elevator, while learning about the world of coal extraction. From the
see more
Editor's pick

ul. Srebrna 6, Zabrze
/katowice/maciej-shaft_73384v
The most modern of Zabrze's industrial heritage sites, completionists won't be content without exploring this sterling example of coal mining operations from early 20th century. Of the town's three mines open to visitors, Maciej has been developed for to
see more

ul. 3 Maja 19, Zabrze
/katowice/museum-of-mining_117543v
Before stepping foot inside any mine, a visit to the Museum of Mining serves as an essential and fascinating primer. Presented in chronological order are numerous displays documenting the development of industry in the city. Along the route you’ll find e
see more