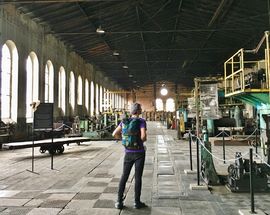 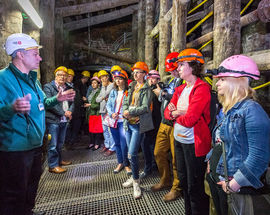 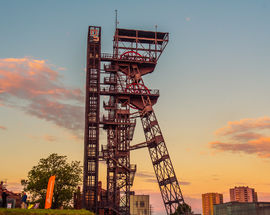 While such a prediction may have raised eyebrows only twenty years ago (we should know, we started publishing tourist guides to PL in 2000), today Poland has established itself (with our help, of course) as a bona fide tourist destination - a fact not lost on the flocks of weekend breakers who descend each weekend on its marzipan Old Towns. Taking pride of place is Kraków, with it's enormous market square, castle and UNESCO-listed city centre, but Gdańsk, Wrocław and Poznań have each established themselves as fixtures on the backpacker map, thanks to historic centres that could well have been designed by a team consisting of Hans Christian Anderson and the good Mr. Kipling. Even Warsaw, once famed for its bleak, desolate boulevards, has generated a reputation as one of New Europe’s liveliest capitals.

So what of Katowice then, or the region of Upper Silesia as a whole? A quick glance around is enough to suggest that works by Da Vinci will be tough to find here, so it’s with a fair degree of astonishment that most visitors learn that the Silesian landscape – dotted with its derelict factories and overgrown slagheaps – is something of a tourist goldmine (emphasis on 'mine'). Transformed by the Industrial Revolution in the second half of the 19th century, what had previously been an idyllic rural backdrop suddenly found itself the focus of corpulent industrialists looking to make their fortunes from the coal and steel discovered here. Up went the factories and the chimney stacks, followed by huge migratory waves of people – both German and Polish – as everyone from balding fat cats to scruffy urchins looked to make coin and careers out of the newly discovered resources. From thereon the region took on the appearance of an L.S. Lowry picture, its fledgling cities filled with blackened buildings and shuffling matchstick figures.

The scorched earth policy followed by Hitler in the final years of WWII did little to dent Upper Silesia’s industrial importance. The communist authorities knew they had inherited a veritable wealth of mineral riches, and set about exploiting them to the max. Quickly becoming an environmental black spot, the region was fast heading for ecological catastrophe, a fate only narrowly averted by the collapse of the political system in 1989. Somewhat amazingly, and thanks in no small part to the ongoing cooperation between local government and foreign institutions, the ecological balance of the area has been restored to safe levels today. What’s more, it’s now possible for the intrepid tourist to explore the very facilities that made Silesia – and nearly destroyed it. Below we list the most interesting industrial heritage sites throughout the region, but enthusiasts are urged to get hold of a copy of the excellent ‘Silesian Industrial Monuments Route' (Szlak Zabytków Techniki Województwa Śląskiego) - a multi-lingual pamphlet containing literally dozens of sites, which can be picked up for free in Tourist Information points.

ul. Tadeusza Dobrowolskiego 1
EDITOR'S PICK
/katowice/silesian-museum_137651v
One of the most impressive and most important recent investments in Katowice was the opening of the new home of the Silesian Museum on the site of the former …
see more
Editor's pick
Zabrze Sightseeing

ul. 11 Listopada 50
EDITOR'S PICK
/katowice/zinc-rolling-mill_153348v
If you haven't noticed already, Katowice, and Silesia as a whole, is big on industrial tourism. If this is where your interests lie, then 'Walcownia Cynku' …
see more
Editor's pick
Places of Interest

Historic Silver Mine in Tarnowskie Góry

ul. Szczęść Boże 81, Tarnowskie Góry
/katowice/historic-silver-mine-in-tarnowskie-gory_155761v
You may have spotted this already, but Silesia is big on post-industrial tourism - and it has a lot to offer! Tarnowskie Góry, just 30km north-west of …
see more
Zabrze Sightseeing

ul. Wincentego Pola 65
/katowice/wujek-mine_153881v
If you’ve noticed the two candy-striped smokestacks near the centre of Katowice – and it would be particularly difficult not to if you’ve taken a walk to
see more
Cultural Centres

ul. Porcelanowa 23
/katowice/porcelain-factory-fabryka-porcelany_150574v
If you've ever been to Łódź's 'Manufaktura' or '
see more
Gliwice Sightseeing

ul. Bojkowska 37
/katowice/museum-of-artistic-casting_122408v
This branch of the Gliwice Museum presents iron and bronze artistic castings in the 19th century Royal Prussian Cast Iron Foundry where they were made. An …
see more
Tychy Sightseeing

ul. Browarowa 21, Tychy
/katowice/browar-obywatelski_125842v
This is one of the most dynamic and rapidly developing spaces in all of Silesia and is a model for the post-industrial potential of the region as a whole. The …
see more
Zabrze Sightseeing

ul. 3 Maja 19, Zabrze
/katowice/museum-of-mining_117543v
Before stepping foot inside any mine, a visit to the Museum of Mining serves as an essential and fascinating primer. Presented in chronological order are …
see more
Gliwice Sightseeing

ul. Tomasza Edisona 16, Gliwice (Śródmieście)
/katowice/museum-of-sanitary-technology_73443v
Having a dull day exploring dusty museums? Then how about visiting a sewage plant! A trip to the Museum of Sanitary Technology allows you to troop around …
see more
Brewery Tours

ul. Browarna 88, Żywiec
/katowice/Zywiec-Brewery_42520v
In addition to the Tyskie Brewery in Tychy, those with their beer goggles on and a good map in front
see more
Zabrze Sightseeing

ul. Rymarska 4 (Nikiszowiec)
/katowice/industrial-ethnography-museum_88529v
Located in Nikiszowiec, this branch of the Katowice Historical Museum is unique in its emphasis on ethnography and folk culture, approaching the topic from an …
see more
Silesian Places of Interest

ul. Repecka, Tarnowskie Góry
/katowice/black-trout-adit_155755v
The Black Trout Adit (we'll get to the name in a moment!) is located in Tarnowskie Góry, just 30km north-west of Katowice. As you may know, Silesia is heavy on …
see more