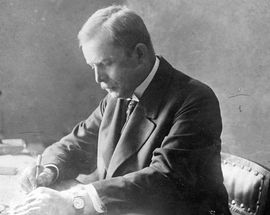 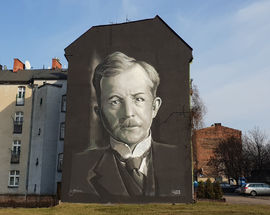 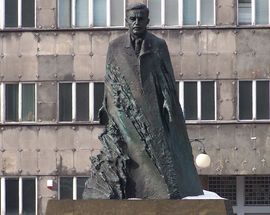 A Polish national activist, journalist and politician, Wojciech Korfanty (April 20, 1873 - August 17, 1939) achieved infamy as a paramilitary leader during the Silesian Uprisings. Born the son of a Polish Silesian miner, in his early life Korfanty studied philosophy, law and economics at the University of Breslau (Wrocław) becoming involved in Polish nationalist circles as a young man and joining the secret nationalist society “Z,” which resisted the Germanisation of Upper Silesia’s Polish population in the decades prior to World War I. In 1901 he became editor-in-chief of the Polish language paper ‘Górnoslązak’ (The Upper Silesian) which he used to try to awaken the national consciousness of the region’s Polish population. In 1903 Korfanty became Upper Silesia’s first Polish member of the Reichstag (the German parliament) and used the position to protect Germany’s Polish minority from discrimination and urge them to move their political allegiances away from the Catholic Church and towards the Polish national cause.

After World War I, Korfanty was one of the chief advocates of joining Upper Silesia and other eastern German territories to the new post-war Polish Republic. As diplomacy failed Korfanty became one of the leaders of the Second Silesian Uprising and the primary organiser of the Third Silesian Uprising against German rule in Upper Silesia, for which he was accused by Germans of organising terrorism against the German population of Upper Silesia. The revolts were successful in forcing the German authorities to leave Upper Silesia and Korfanty was largely credited by Poles for his role in the outcome when Silesia’s most valuable industrial districts were granted to Poland after the war, despite Poland losing the plebiscite vote meant to determine the destiny of the territories.

After the war Korfanty was elected to the Polish Sejm from 1922 to 1930, conversely defending the rights of the German minority in Upper Silesia and opposing the post-war autonomy of the Silesian Voivodship, which he saw as an obstacle to its re-integration into Poland – the very cause he had fought for. He became a political opponent of Józef Piłsudski, who he considered a threat to Polish unity, and after the May Coup that put Piłsudski’s government in power he was arrested and tossed in the Brest-Litovsk fortress with other political opponents of the new regime. Forced to leave Poland in 1935 he emigrated to Czechoslovakia and then France, but attempted to return to Poland after Nazi Germany broke with the Polish-German Non-aggression Pact, hoping that the national threat would bring an end to domestic political rifts. Those rifts remained and Korfanty was immediately arrested upon entering the country. In August 1939, he was released from prison due to bad health and died days later, only two weeks before the Nazi invasion of Poland which began WWII; it is generally accepted that the poor treatment he received in Polish prison accelerated the failure of his health or directly caused his death.

Korfanty’s image was rehabilitated after WWII and today he is remembered as a national hero. Those with a fondness for irony should visit his monument in Katowice on Plac Sejmu Śląskiego outside the Silesian Parliament building, the institution of which he strongly opposed. Nearby on the same square is a monument to Józef Piłsudski, the political opponent who orchestrated Korfanty’s two arrests and political exile.

Al. Korfantego
/katowice/silesian-insurgents-monument_32659v
Supposedly the largest and heaviest monument in Poland, this vast bronze edifice is one of Katowice's most famous landmarks, commemorating the three post-WWI …
see more
Monuments