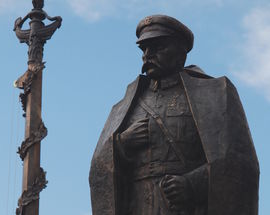 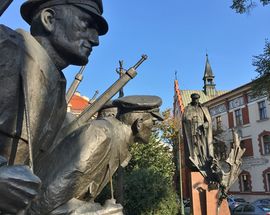 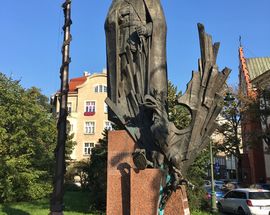 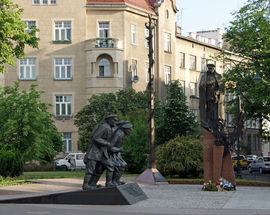 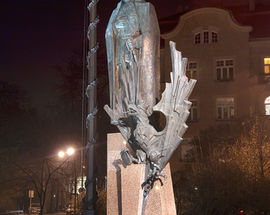 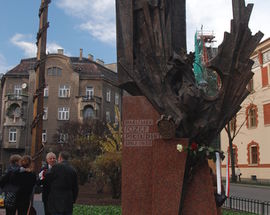 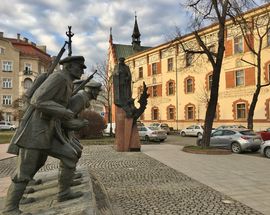 You might notice a lot of Piłsudski in Kraków: between Piłsudski Street, Piłsudski Mound, the Piłsudski House and this Piłsudski monument you would be justified in asking whether this was the most famous Krakowiak of all time. In fact this general, statesman and revolutionary is an important figure for Poles around the country thanks to his contributions to Polish independence after 123 years of a partitioned Poland (during which time the country was occupied by Prussia, Russia and Austria-Hungary, and absent from the world map).

Born in 1867 in what was then Imperial Russia, Piłsudski developed an early distaste for the imperium’s Russification policies and was arrested and exiled to Siberia at the age of twenty for plotting to assassinate the Tsar. In 1892, when he was finally allowed to return, he joined the Polish Socialist Party and began publishing an underground socialist newspaper. As the Russo-Japanese War broke out in 1904, Piłsudski, never one to turn down a good fight, formed a paramilitary unit, eventually using bombs to assassinate selected Russian police officers, and unsuccessfully attempted to start a Polish workers’ uprising.

WWI rolled around, and Piłsudski continued on the same trajectory, mobilising a cadre company in Kraków and sending it towards Russian-occupied Warsaw in the hopes of starting a national uprising - another endeavour doomed to failure. The military man had more success with his Polish Legions, established a short time after, which took part in several victorious battles. Initially supporting the Central Powers (Germany, Austria-Hungary, the Ottoman Empire and Bulgaria) against Russia, he switched sides in 1917 as it became evident that the Central Powers were in no position to guarantee Polish independence; he hoped the Entente would be more favourable. In July of that year, he forbade his troops from making an oath of loyalty to Emperor Wilhelm II of Germany, enraging the Central Powers. This resulted not only in Polish troops being sent to PoW camps or forcibly drafted into the Austro-Hungarian Army and Polnische Wehrmaht, but also in the arrest of Piłsudski. Curiously, many Poles viewed this as a show of determination by a leader not afraid to take on any of the partitioning powers, and his popularity soared. Piłsudski was finally released in November 1918, three days before the Armistice, and was shortly appointed the Commander in Chief of Polish forces and entrusted with building a national government for the newly independent Poland, serving as Chief of State until 1922.

The idea to commemorate the statesman with a proper memorial was actually first put forward that same year, 1922. As it happened, the project was put on hold to focus on building the Józef Piłsudski House (al. 3 Maja 7), a commemorative modernist structure located on the spot from which the First Cadre Company, mobilised by Piłsudski, set out for Russia at the start of WWI. The building was completed in 1935, but before long WWII broke out in Europe and the memorial was delayed even more; by the time the war ended and the new communist government took over, any positive mention of Piłsudski was a no-no due to his anti-Russian and anti-communist views. All the while, pro-Piłsudski sentiment brewed among the Polish populace, and the fall of communism brought a renewed surge of commemorative efforts. Since 1989, two characters have started dominating the landscape, with monuments popping up left and right: our man Piłsudski and Pope John Paul II.

This three-part statue, fittingly located on Piłsudski Street, was unveiled in 2008 thanks to the efforts of the local Marksmen’s Society, an organisation dating back to the 13th or 14th century, when their primary purpose was training civilians to be able to defend the city walls. Created by Czesław Dźwigaj, also responsible for churning out nearly fifty Pope John Paul II’s, the monument portrays a tall and intimidatingly mustachioed Piłsudski watching over four Polish Legions soldiers - apparently plagiarized from an earlier work by Jan Raszka. An 8.5m flag mast, wrapped with laurel foliage, completes the memorial.