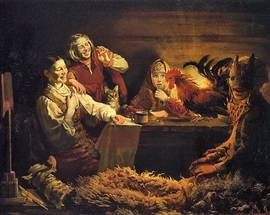 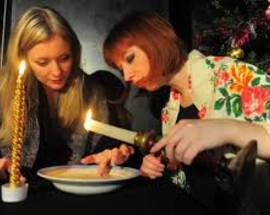 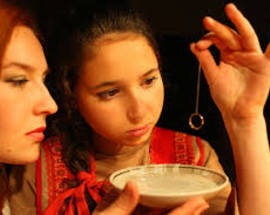 Christmas in the West is often seen as a modern commercial phenomenon. But here the spirit of old Pagan days remains strong during 6th-13th January, when many traditional Russian households take part in superstitions and rituals that keep the past alive. They are preserved most prominently in the Russian countryside.

Before ‘Trick or Treat’ was even thought about, Russian people during Christmas time used to wear masks, of animals for instance, knock on doors to sing carols and read poems for their neighbours, who in return gave them food. These days it is mostly only young people in villages who do this; wearing make-up instead of masks.

There is a folk superstition about the weather on Christmas Eve. If it’s stormy, then there will be an early spring. If it’s warm, then Spring will be cold. If the snow stays on the branches of the trees, there will be a good harvest of wheat.

There are also a lot of rituals for people, mostly girls, who want to know their future for the next year. Girls in the old times mainly wanted to know about their marriage (apparently this is still the case!). According to tradition, the night of old New Year's Day, 13th January, gives the most truthful predictions.

Screw up some paper, put it on a tray and set fire to it. When it stops burning, lift the tray to a wall in front of some light. The shadow of the burnt paper should cast a shape onto the wall. You can predict the coming year’s luck from the shape of this shadow.

Take a deck of playing cards and remove the King of Diamonds. Put it under your pillow on a night between 6th-13th December and you will dream of your future husband(s)!

A group of girls take an onion each. Each girl plants her onion in the ground, somewhere she will remember. The girl whose onion first grows roots will be the first to marry.

Farm girls who want to find out about their groom-to-be place a mirror, a bowl with water and a bowl with grain on the floor. Then each of them releases her chicken. If the chicken pecks at the mirror, her husband will be vain, if at the grain, he will be rich, and if it pecks at water, he will be a drunk!

Considered the most frightening and bewitching ceremony of olde. You have to be alone for this and it is considered the most accurate of all. There must be no light in the Banya (Russian bath-house) apart from your candle. Take a mirror (or two) and place it on a table. Put the candle in front of the mirror. Sit in front of the mirror and stare at your reflection for a long time - a very long time. It is said that you will envision your future in the mirror. It is believed that if a girl sees her coffin then she will die the same year. Not surprisingly, it is normally the future husband who appears in front of her eyes!

Stories round the fire

It is nice to huddle round with family or friends and read folk tales in the winter months. The scene at the top of the page comes out of the first series of Gogol’s "Evenings Near the Village of Dikanka" - a collection of tales based on Ukrainian folklore published in 1832. In the story "The Night Before Christmas," the main character is Vakula, who is a messenger of sorts between the world of good and evil. Vakula is the man on the devil's back and they are on their way to Catherine II's court. The priest is knocking at the door of Chub and Solokha.