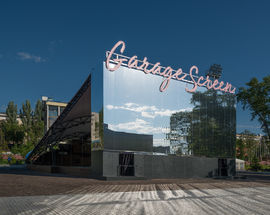 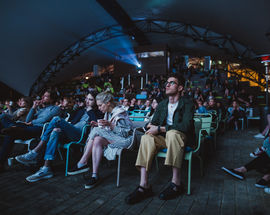 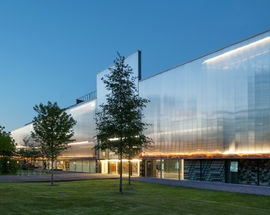 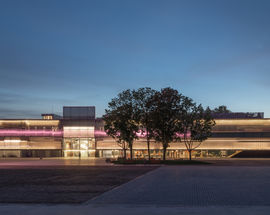 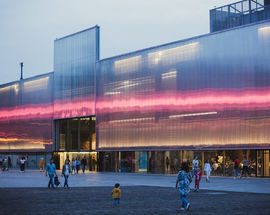 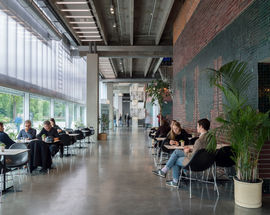 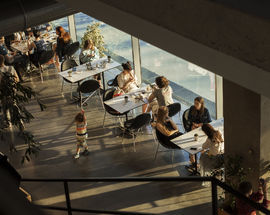 Garage is perhaps one of the most famous contemporary art museum’s in Moscow, founded by Dasha Zhukova. Garage is undeniably leading the way in contemporary art development not only in Moscow but in Russia as a whole; the institution has been involved in the development of New Holland Island in St. Petersburg as well as numerous other projects.

The museum itself is nestled in Gorky Park; the vast Soviet modernist structure is impossible to miss and leaves a powerful impression on visitors before they have even entered. The building is raised two metres above the ground, to provide visitors with a view over Gorky Park once inside. Such an architecturally spectacular structure comes at a cost however, and since the renovation began in 2011, $2 billion has been spent on Garage. Inside, you are immediately overwhelmed by the incredible vastness of the space.

The building itself however was not always a haven of simplicity and minimalism. Before it was redesigned by Rem Koolhaus, it was once a true icon of the Soviet era. Unbelievably, the structure was once the huge restaurant ‘Vremena Goda’ which translates to ‘Seasons of the Year’. The novelty of this quirky restaurant was the sheer numbers of people it could host – over 1,000 people. Whilst Dutch architect Rem Koolhaus indeed turned the dilapidated relic of the Soviet Union into a home befitting of modern art, much of the original elements of the building remain. Mosaics and murals have been preserved, which create a tangible juxtaposition of eras, encapsulating at once Russia’s rapid historical transition of the last three decades. Of course, Garage is known for more than just its architecture and inside there are a number of different exhibitions which occupy the space, as well as an auditorium, bookshop, café and educational centre.

One of the joys of Garage are the many events that are hosted there. A regular fixture is the film screenings which take place either in the auditorium, or in the summer, on the rooftop. The films range from international and foreign films, to documentaries, to films about current artists exhibiting there. Film is becoming more and more popular as a mode of creating and expressing art and Garage is taking full advantage of that. The films, based on the artists, offer a rare and beautiful glimpse into their lives, which adds a personal perspective to their work, allowing visitors to truly immerse themselves in the process of the art they are seeing. To continue the theme of bringing art to life, Garage hosts numerous workshops both for adults and children.

As pioneers of contemporary art exhibition, it is unsurprising that Garage is home to the largest library of books dedicated to 20th and 21st century art in the country. The library draws in researchers and lovers of art, who benefit from the electronic catalogue, and the many literary events held at the museum.

Garage as a creative space is hard to characterise in just a few sentences; it is a hub of modern creativity and contemporary art, but beyond that it is a leader of artistic development, cultivating projects in Moscow and Russia. Set in Gorky Park, it is worth dedicating a day to explore the museum, and the exhibitions both inside and out. It is hard to imagine that once upon a time, in the same building was a vast Soviet restaurant that saw Moscow in the midst of communism. Despite Garage’s exquisite makeover however, the preservation of its Soviet interior allows for whispers of the past to linger in the building, reminding us that Russia is still teetering on the threshold of time, with one hand clinging to its history as it clambers towards the future.

Ul. Krymsky Val 9
/moscow/gorky-park_39166v
The immortal Gorky Park has had a complete makeover in 2011 and gone are the garish rides and rollercoasters as the park has gone back to being a wholesome place to picnic or jog and enjoy an ice-cream. Bikes are available for rent near the entrance, the
see more

14.09.2014
Martino
italia
I&#39;m an Italian artist, I would like to introduce you to my art. I&#39;d like to be able to exhibit my works in your art gallery. Waiting for your reply Yours faithfully. Martino
Take your guide with you Download a pdf