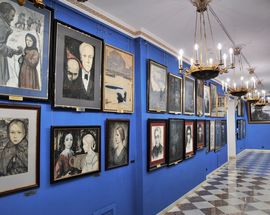 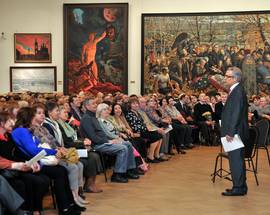 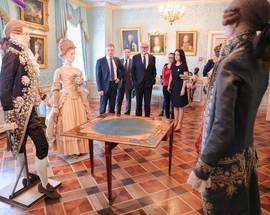 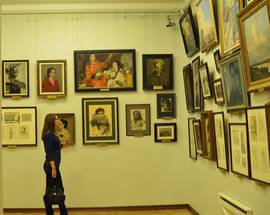 Named after Ilya Glazunov – one of the greatest artists, social activists and art educators of our time – the grandly decorated building of the Glazunov Gallery stands right opposite the world famous Pushkin Museum of Fine Arts in the heart of Moscow. The painter died in July of this year at the age of 87 but his legacy and love for the Motherland lives on here in his gallery. Spread over three spacious floors, the gallery is mostly dedicated to the Glazunov’s paintings. The first floor exhibits the more politicized examples of Glazunov’s works, which clearly express his nationalistic views (Glazunov was awarded with a “Service to the Motherland” decoration by Vladimir Putin himself). You may not agree with the politics of Glazunov, but his paintings are certainly a loving homage to Russia.

Apart from his beautiful art, visitors can marvel at photographs of the interiors of such places as the Grand Kremlin Palace and the Russian embassy in Spain, both of which were designed according to Glazunov’s plans. A series of photographs shows Glazunov in action, so to speak: in the trenches of Nicaragua, on the stage of the Bolshoi Theater, in Rome and Copenhagen, standing next to leading world figures like Patriarch Alexey II, Pope John Paul II, Vladimir Putin and the King of Spain.