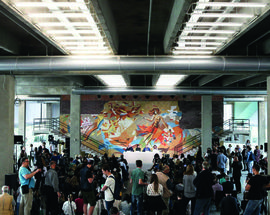 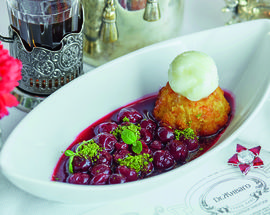 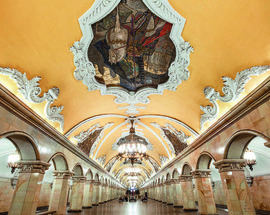 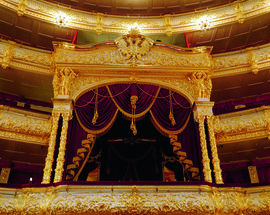 Moscow is a city that never sleeps – or ceases to amaze with its sights, sounds, scents and tastes! That, however, is a blessing and a curse. With so much going on, how is it humanly possible to fi gure out what to do, especially if you’re in town for just a few days? But don’t despair, we’ve put together a list of the top 10 things you simply must do while in the Russian capital. By no means is this exhaustive so if you have more time and get through them all, fl ip through all the pages of this publication for more ideas.

1. Red Square, Kremlin and The Cathedrals
But you already know this! Of course, every Moscow visit begins with a walk around the Red Square, a visit to the Mausoleum, a tour of the Kremlin, a cheeky spot of shopping in the legendary GUM shopping center as well as a look in and around St. Basil's Cathedral and the Christ the Savior Cathedral. While you're in the area, we'd also highly recommend visiting the State Historical Museum, the Kazan Cathedral, Lobnoye Mesto, the Necropolis on the Kremlin Walls and if you're lucky, you might even get to attend one of the many festivals, concerts and entertainment events that the Red Square regularly hosts.

2. Get your Art fix
If there's something that Moscow doesn't lack, it's art galleries and museums: today there are 500 museums in Moscow and the number
is constantly growing. No visit to Moscow is complete without spending at least a few hours wandering around the State Tretyakov Gallery (the foremost depository of Russian fi ne art in the world) or the Pushkin Museum, which boasts the largest collection of European art in Moscow. For something a bit more modern, check out the Tretyakov Gallery on Krymsky Val, the Multimedia Art Museum, the Garage Center for Contemporary Culture in Moscow’s iconic Gorky Park, the Jewish Museum and Tolerance Center (which regularly brings some of the best contemporary names), the Lumiere Brothers Center for Photography and the MARS Center. Also note that on the third Sunday of each month, some Moscow museums have “Open Door Day” (for example the Museum of Cosmonautics, the Darwin Museum, the House of Gogol, the GULAG Museum and the Moscow Museum of Modern Art). Unfortunately, the major national museums do not take part in this.

3. Take in some seriously spectacular views
Moscow is a real stunner from the ground. Now imagine seeing it all on the palm of your hand from up high! There are a few places that off er some stellar views of the city. The observation deck at Sparrow Hills (Vorobyovy Gory) is on a steep bank 85 meters above the river, with the Luzhniki Stadium and the neighboring Novodevichy Convent right below you across the river and the the Moscow State University (at one time the tallest building in Europe) and the Trinity Church behind. If you climb up to the top fl oor of the renovated Detsky Mir department store, you’ll see the historic center sprawled out in front of you. For a few rubles, you can also go up to the Ostankino TV tower (337 meters), the ferris wheel at VDNKh (73 meters) or the observation deck in Moscow City (260 meters). A fantastic view is best enjoyed with a delicious meal. These restaurants off er top-notch food and drinks accompanied by some of the best views in town: Sky Lounge, White Rabbit, Kalina Bar, Time Out Bar and the O2 Lounge.

4. Day of Action-packed fun at Gorky park
There's hardly any other place in Moscow that's so beloved by locals and tourists alike. The immortal Gorky Park had a complete makeover in 2011, after which the park went back to being a wholesome place to picnic or jog and enjoy an icecream. Bikes and roller skates are available for rent at several points around the park and you can cycle along the river from the start of Muzeon to the very end of Vorobyovy Gory (almost 10km one way) and see many of the city’s best sights on the way. There are also pedalos on the ponds, picnic areas are scattered throughout and near the Andreevsky bridge where salsa classes gather in warm weather, there's even an artifi cial beach. In addition to all that you'll fi nd regular open-air concerts and a cinema, fl ea markets, yoga classes, great places to eat and drink, ping pong tables and the contemporary art space Garage.

5. Travel back in time to the soviet days at VDNKH
If there were such a thing as a Soviet Disneyland, Moscow’s VDNKh (pronounced VDN-hah) park would be it. No matter what direction you head in, a massive, opulent Soviet relic is bound to confront you. Most of them can be found on the grounds of the giant All-Russian Exhibition Centre (VVC), the namesake of this part of the city. The Friendship Fountain with its golden dancing maidens each dedicated to a Soviet republic sits at the heart of the complex surrounded by various pavilions in diff erent designs which each represent a Soviet republic and its achievements. In the warmer months it is crawling with families and sports enthusiasts. But not everything there is reminiscent of the Soviet days: lots of cool, hipster food stalls have popped up and arts exhibitions of all sorts take place throughout the year. In the winter, VDNKh is home to the world’s biggest ice skating rink. It is also one of the world’s most beautiful!

6. Explore Moscow's creative clusters
The trend of converting old abandoned warehouses and factories in creative clusters reached Moscow long ago. These converted industrial spaces are usually home to creative agencies, arts venues, happening restaurants and bars, funky shops and much much more. One of the fi rst ones was Winzavod, a hub of contemporary galleries and other artistic inspirations on an industrial factory lot that used to be a wine factory. Next door you’ll fi nd the enormous Artplay cluster, a former tea factory now home to numerous design studios, bespoke interior studios, large temporary exhibition spaces and small private galleries and a rooftop café-bar with awesome views. Red October was once Moscow’s most beloved chocolate factory but now it boasts Strelka Design College, many rooftop bars and clubs with views over the river and Christ the Savior Cathedral, shops and art galleries.

7. Try traditional and modern Russian food
You’ve probably heard of the purple soup (borshch), the caviar, vodka, blinys and other staple Russian foods and now that you’re finally in Russia you want to try them all. To feast like a real Tsar, head over to Cafe Pushkin, Moscow’s most famous (and probably also priciest) Russian cuisine restaurant. Grand Cafe Zhivago and Savva Restaurant at the Metropol Hotel are on the same price and grandeur level as Pushkin and they also off er fantastic views of the Red Square. Lucien restaurant recreates the style, sophistication and tastes of the Russian nobility in the 19th/early 20th century. A handful of Russian chefs and restaurateurs are moving away from the classical interpretation of Russian cuisine and have begun experimenting with diff erent local ingredients and cooking methods. The result is a new and fascinating Russian cuisine, the best examples of which can be found at LavkaLavka, Twins and Crab & Wine.

8. Visit the city's cheapest museum: The Moscow Metro
Not only is Moscow's incredibly extensive underground
metro system by far the easiest, quickest and most effi cient way to travel around the Russian capital, it is also a real wonderland for anyone interested in architecture, art and history. The metro is a luxury underground made of marble and granite and we highly recommend just getting your cameras out and walking around the following stations: Ploschad’ Revolyutsii, Elektrozavodskaya, Arbatskaya, Kievskaya, Belorusskaya, Novoslobodskaya, Komsomolskaya and Mayakovskaya. But word of warning, avoid morning and evening rush hours (08:00 – 10:00 and 17:00 – 19:00 respectively) in order to enjoy the stations in a relaxed manner.

9. An evening at The Bolshoi
Hardly needing any introduction, we'll give it one anyway. Russia's best known theater without a doubt, this is the sacred home of ballet and opera in the capital. Having recently undergone a massive reconstruction, the Bolshoi is it one of the most opulent, but also technically magnificent opera houses in the world – a real beauty on both the outside and inside. The Bolshoi troupe performs in both the spectacular building on Theater Square as well as in a second theater next door (the Maly Theater). Check their website for the program, don your most exquisite evening wear and enjoy a magical evening you won’t soon forget.

10. Dance the night away
Last but by no means least, you're probably curious why Moscow never sleeps. This is because we here in Moscow like ourselves a good party! There's something for every taste - and budget! Moscow's most glamorous tend to frequent night clubs like Sibir', Motel and Artel Bessonitsa. Moscow's burgeoning dance music scene is best displayed at clubs like Rodnya, Strelka, Chateau de Fantomas, Gazgolder and Krysha Mira. Word of warning: unlike most western electronic music clubs, some of the aforementioned have somewhat of a strict face control policy - no need to overdress but do pick out something stylish for the night. Denis Simachev Shop & Bar is the ultimate in hipster fun. Also, Muscovites are starting to make the switch from clubs to bars. Some of the coolest bars are in the fashionable "Patriki" (Patriarch's Ponds) area and veteran cocktail and tunes venues like Noor, Mendeleev and Time Out are also worth a visit.